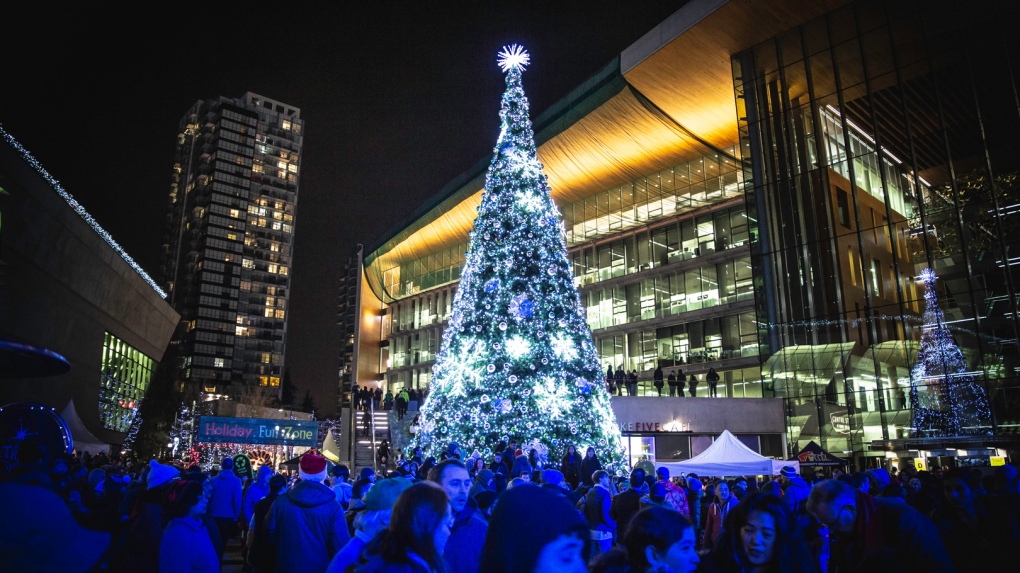 The Surrey Tree Lighting Festival is one of the events still happening this holiday season, albeit with some COVID-19-promted modifications.

Dec. 7 update: The decision to extended B.C.'s public health order banning most gatherings and severely limiting social interactions into January 2021 resulted in additional events being cancelled. Anyone looking to celebrate should contact venues first to ensure they're open before making plans.

VANCOUVER -- With COVID-19 cases in B.C. and across Canada surging in recent months, the prospect of a post-pandemic winter holiday season has been looking less and less likely.

Several beloved Christmas-season events in Metro Vancouver have been cancelled this year, while others will continue with coronavirus precautions in place.

The following list will be updated with details about 2020 holiday festivities as more announcements are made.

Lights of Hope at St. Paul's Hospital: The annual display of more than 100,000 lights at St. Paul's Hospital on Burrard Street in downtown Vancouver will happen this year, but the hospital foundation, which organizes the event, is asking Vancouverites to enjoy it from home rather than in-person. From Nov. 19 until Jan. 4, the Lights of Hope website will host an "always on" livestream of the lights. The display will kick off at 6 p.m. on Nov. 19 with a virtual lighting ceremony.

Visits with Santa at local malls: Guildford Town Centre in Surrey has relocated Santa Claus to a vacant farm market attached to the mall, creating what it calls an "open-air setting" in which Santa will visit in-person with households of up to six people at a time. Times for visits with Santa must be scheduled in advance, and Santa will be separated from families by Plexiglas. Other local malls are moving their Santa experiences online. Cadillac Fairview, which owns Richmond Centre and Pacific Centre, is offering video chats with Santa, which can be scheduled online through each shopping centre's website.

PNE WinterLights: Last year, the PNE played host to the Aurora Winter Festival, an outdoor holiday light display and festival that won't be returning this year. Instead, PNE WinterLights will take guests on a two-kilometre drive-thru route that will feature nine "lands" filled with lights and characters on their way to see Santa. The event will take place Dec. 12 to 13, Dec. 17 to 23 and Dec. 26 to 27. Tickets and time slots must be reserved online in advance, and were sold out as of Dec. 9.

Vancouver Polar Bear Swim: The organizers of Vancouver's annual New Year's Day charity swim say the event will still be held on Jan. 1, 2021, but not in the frigid waters of English Bay. Instead, participants are encouraged to register online starting on Dec. 21 and plan to take a dip in the safety of their own homes at 2:30 p.m.

Free transit on New Year's Eve: In previous years, TransLink has offered free transit and extended hours on New Year's Eve as a way to encourage people to get home safely from parties without resorting to impaired driving. In light of restrictions on social gatherings due to the pandemic, the transit company announced in mid-December that it would not be offering free rides or extended hours this year. The Metro Vancouver transit system will instead operate normal weekday service, TransLink says.

Skating at Robson Square ice rink: On Dec. 8, after B.C. extended its public health orders limiting social gatherings through the end of the year, Minister of Citizens' Services Lisa Beare issued a statement saying the province would be unable to open the skating rink at Robson Square in downtown Vancouver.

Holiday Cheer at the Pier Drive-Thru Toy Drive in Port Moody: The event was scheduled to take place Saturday, Nov. 28, but was cancelled because of public health orders announced mid-November. Instead of a one-day toy drive, organizers are now asking people to drop off new, unwrapped toys at City Hall or the city's Recreation Complex between 8 a.m. and 4 p.m. from Dec. 1 to 21. Toys can also be dropped off at the Inlet Centre Fire Hall or the Public Safety Building during business hours until Dec. 15. The toy drive is organized by City of Port Moody, Port Moody Fire Rescue and Port Moody Police, and toys collected go to SHARE Family and Community Services for distribution to local families in need.

Canyon Lights at Capilano Suspension Bridge Park: The annual holiday lights display at Capilano Suspension Bridge was scheduled to start on Dec. 1 with "a few operational changes to ensure the health and safety of visitors and staff," according to the park's website. Instead, due to recent provincial health orders, it has been cancelled. Those who booked one-day admission for dates between Dec. 1 and Dec. 7 are asked to contact the attraction to change dates or secure a refund.

The Peak of Christmas at Grouse Mountain: Activities including ice skating and snowshoeing at the summit of Grouse Mountain will continue, but the Peak of Christmas event has been cancelled due to recent public health orders. The mountain initially planned to continue its annual Christmas tradition with extra precautions, but has since cancelled the event. Grouse opened for skiing and snowboarding on Nov. 20.

VanDusen Festival of Lights: The 36th annual Festival of Lights at VanDusen Botanical Garden in Vancouver was expected to happen in 2020, but was first postponed and then cancelled. The decision to cancel came after B.C. health officials confirmed province-wide public health orders introduced in November would continue straight through into January 2021.

Bright Nights Christmas Train: The 23rd annual event was expected to run from Nov. 26 to Jan. 1 in Stanley Park, but public health orders mean it's been cancelled this year. Officials previously said even if it were to open, there would have been limited hours and no other activities besides the train, due to COVID-19 safety requirements.

Vancouver Christmas Market: After celebrating the European-style outdoor market's 10th anniversary in 2019, organizers announced in early October that they had decided to "postpone" the 2020 edition. They plan to return to Jack Poole Plaza for the 2021 holiday season.

Vancouver Santa Claus Parade: Organizers of the annual Santa Claus parade say they spent months considering alternative ways to hold the event, only to decide on cancelling in late October. The society that organizes the parade says all associated events, including the Santa Claus breakfast at the Fairmont Hotel Vancouver, have also been cancelled. Organizers hope the parade will return in 2021.

Lights at Lafarge: The City of Coquitlam's signature seasonal event, which in the past has drawn as many as 10,000 people at a time to the city's Town Centre Park, was officially cancelled in late October. The city says it made the decision to cancel the free light display because of B.C.'s ongoing ban on large gatherings during the COVID-19 pandemic.

Holiday programming at Metrotown: In a post on its website, Metropolis at Metrotown indicates that it has cancelled all of its holiday programming due to rising COVID-19 case numbers. A spokesperson told CTV News this means there will be no visits or photos with Santa Claus this year, nor will there be gift-wrapping services offered by local charitable groups. The mall will still be offering extended shopping hours during the holiday season, however.

New Year's Eve fireworks in Vancouver: After taking 2019 off to prepare for a move from Coal Harbour to False Creek, Vancouver's New Year's Eve Celebration Society had planned to ring in 2021 with a fireworks display that was expected to draw more than 100,000 spectators to downtown. Restrictions on public gatherings make doing that this year impossible, and organizers decided in early December that they would cancel this year's New Year's Eve fireworks display. The group now plans to complete its arrival in False Creek with a display on Dec. 31, 2021.

Soar with Santa at FlyOver Canada: The annual holiday was scheduled to run Nov. 19 to Jan. 3 this year, but FlyOver Canada closed due to public health orders. The attraction says it plans to reopen when orders are lifted.