The storm-damaged Coquihalla Highway is expected to reopen to commercial traffic on Monday, allowing the government to relax restrictions on other routes and provide B.C. residents a way to drive between the Lower Mainland and Interior before Christmas.

Transportation Minister Rob Fleming credited the surprising new timeline to "one of the most remarkable engineering feats in recent memory," noting the Coquihalla collapsed at multiple points during the historic Nov. 15 storm that caused catastrophic flooding and landslides in the province's southwest.

"The response by our maintenance contractors, our subcontractors, our engineers to get the Coquihalla Highway reopened is as unprecedented as the storms that damaged it in the first place," Fleming said Wednesday.

The province originally said the highway would reopen in limited capacity at the end of January, then bumped that estimate up to early next month.

Fleming said traffic is now expected to begin moving again at some point on Dec. 20, but that the exact timing won't be determined for a few days.

Paula Cousins, regional executive director for the Ministry of Transportation, also provided additional details on the scale of the damage sustained along an approximately 130-kilometre stretch of the Coquihalla in November.

There were 14 sites where lanes were "completely wiped out or significantly undermined," Cousins said, and seven bridge structures that either collapsed or were compromised. There were also five separate slides impacting the highway.

Since the storm, a crew of about 300 people using 200 pieces of heavy machinery have been working around-the-clock to get the major route back up and running.

"We've moved over 400,000 cubic metres of fill, and that's equivalent to lining up dump trucks all the way from Hope to Kamloops, bumper to bumper," Cousins said. "We've blasted over 130,000 cubic metres of rock, which is enough to fill over 50 Olympic-sized swimming pools."

When the Coquihalla does reopen, the government is expected to lift the travel restriction limiting Highway 99 to essential traffic – though a weight limit that prevents anything larger than a cube truck from travelling between Pemberton and Lillooet will remain in place.

Fleming said the travel restriction on Highway 3 will also be removed 24 hours after the Coquihalla reopens. If things go according to plan, the general public will be allowed to drive back and forth across the southern province for the first time since the storm hit. 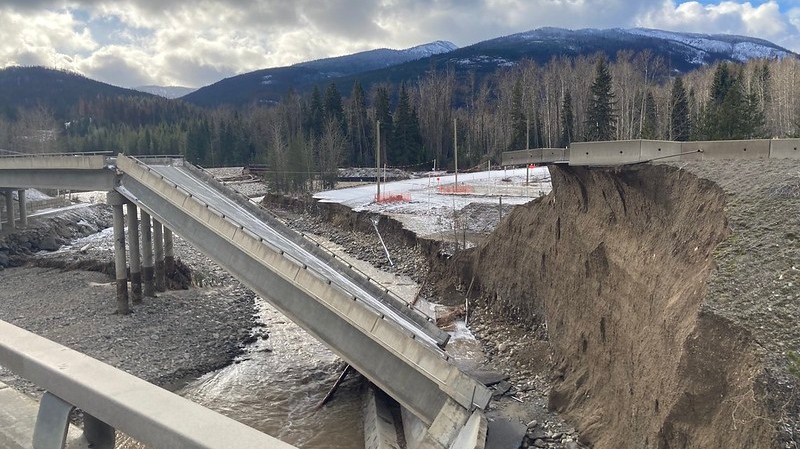 A collapsed section of Highway 5 at Juliet Creek is seen in an image from B.C.'s Ministry of Transportation.

After the reopening, the main priority on the Coquihalla will be keeping B.C.'s supply chains up and running, the minister added.

"The vehicles authorized to use the Coquihalla will be commercial trucks and intercity buses," Fleming said. "This will help allow for the safe transportation of goods and services to people and communities across the province."

Commercial traffic in and out of the Lower Mainland is currently limited to Highway 3, which is seeing about 3,000 semi-trailer trucks per day, making it too dangerous to allow non-essential passenger vehicles.

The government is still expecting to reopen the stretch of Highway 1 between Boothroyd and Spences Bridge in January, and there remains no estimated reopening date for Highway 8.