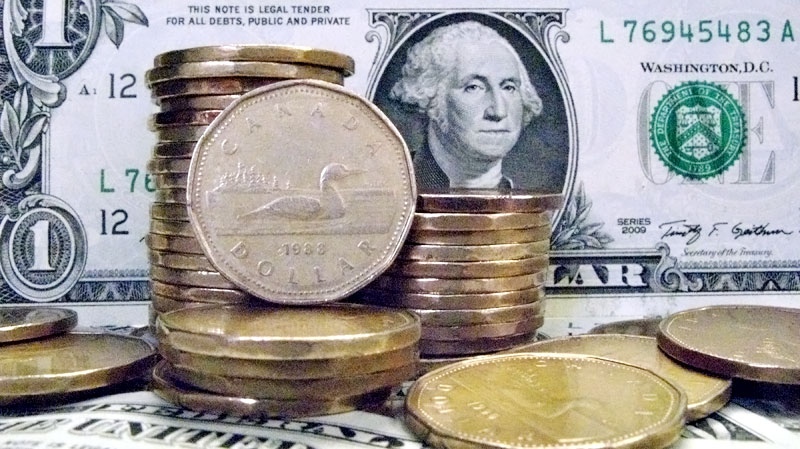 Canadian dollars, or "loonies," are shown with U.S dollars in Montreal on April 6, 2010. (Ryan Remiorz / THE CANADIAN PRESS)

MONTREAL - It's a fact of consumer life that buying in Canada means paying more than you would south of the border, with a so-called Canadian premium on everything from running shoes to hockey skates, from pyjamas to pantyhose.

Even the stronger loonie hasn't been able to overcome obstacles that include import tariffs ranging as high as 18 per cent, a number of higher fixed costs and, admittedly, the fact that retailers in Canada can simply get away with charging more.

"The people who should win from a stronger Canadian dollar are consumers," said BMO's deputy chief economist, Douglas Porter. "They don't feel that way."

"We have been above parity for basically all of 2011 and when you get to those levels it makes the price comparisons very straightforward and it's frustrating for consumers," said Porter, who has been tracking price differences between the two countries since the loonie soared in 2007.

Hockey parents have noticed that equipment is cheaper in the United States and some are finding ways to bring it back to Canada unnoticed.

"It depends on the equipment, but it can vary from 20 per cent to 45 per cent cheaper in the U.S.," said one parent. "When you get into the high-quality products, the price difference is higher."

Some U.S. retailers such as Hollister, the California surfer clothes chain, are upfront about advertising their two-tiered policy, listing both Canadian and U.S. prices on their price tags.

Others, like American fashion retailer J. Crew, charge an average of about 15 per cent more in Canada compared with its U.S. stores and website.

A Senate committee plans to study the price gap, a process that will take time and could run into 2012, which would miss the holiday shopping season.

Tariffs on most goods between Canada, the United States and Mexico were phased out under trade deals signed in the late 1980s and early 1990s.

But there are still import duties paid on some goods not covered by these trade agreements as well as a range of clothing and sporting goods that come into Canada from Asia, Europe, South America and other countries.

There's also the cost of doing business in Canada, which adds to the price of goods -- from bilingual labelling to transportation, payroll taxes and real estate, said marketing professor Ken Wong of Queen's University in Kingston, Ont.

"The other part of it is quite simply what the market will bear," Wong added.

"So, to a certain extent, there is an element of artificial inflation of some Canadian prices. From a consumer perspective, you could say it is gouging. From a manufacturer's perspective, I would guess you see it as smart business."

Cotton clothing such as T-shirts and track suits, women's and girl's ski jackets and overcoats, pillows, cotton bras, towels and bed linen face import duties of between 14 and 18 per cent, according to the Retail Council of Canada.

These items aren't out of the ordinary, said Anne Kothawala, a spokeswoman for the council, which would like to see the tariffs removed.

"Clothing and sporting equipment are the particularly egregious areas," she said.

Federal Finance Minister Jim Flaherty has conceded that removing such tariffs might be one way the government could help, but he wants the Senate committee to take a thorough look at the whole issue.

A bright spot for Canadians is consumer electronics, such as TVs and laptops, because the price difference between the two countries usually isn't significant, according to Christopher Bennett, spokesman for Best Buy Canada and Future Shop.

Technology is getting cheaper and being mass produced and is resulting in ever lower prices, he said from Vancouver.

"The up and downs every month of the dollar in the U.S. or Canada won't drive your excitement," Bennett said of consumers buying consumer electronics.

Meanwhile, Kothawala said there was "no question" Canadians would see a reduction in prices if import tariffs were removed.

"However, because of the time lag in the supply chain and the time it takes to place an order for products, that will not be able to happen overnight," she said.

And, she added that Canadians shouldn't expect to see absolute parity on consumer goods even if tariffs are removed.