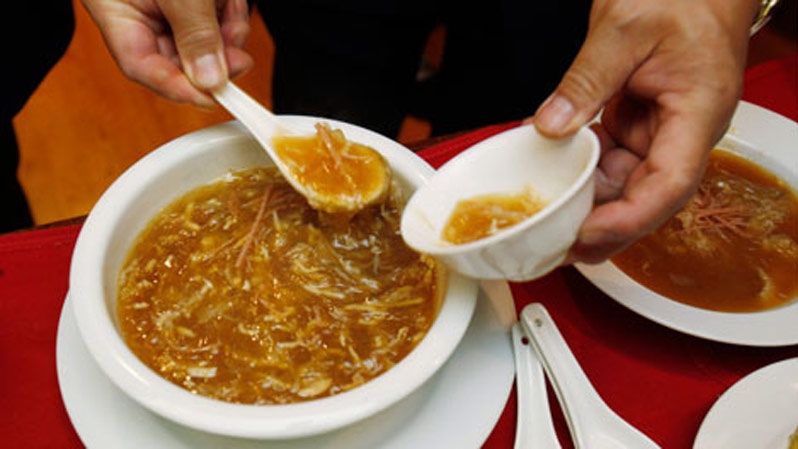 A bowl of shark fin soup being served at a Chinese restaurant. The controversial dish has been pushed into the limelight after Green Party Leader Elizabeth May has called for a ban in B.C. (AP/Paul Sakuma) Aug. 29, 2011

The federal government is banning a controversial Chinese delicacy offered by some Vancouver restaurants.

The federal Liberals' rewrite of the Fisheries Act, known as Bill C-68, aims to protect fish habitats, support new sustainability efforts and ban the import and export of shark fins into Canada.

The bill was approved by the Senate on Tuesday and is moving to receive royal assent.

The City of Vancouver has noted its opposition to shark fin imports, with city council endorsing a federal ban back in May.

"Sharks are so integral to our ecosystem and marine life, so they are threatened with extinction due to the amount of shark finning activity that happens," Coun. Sarah Kirby-Young told CTV News Vancouver at the time.

Shark finning is a practice where a caught shark's fins are cut off and the animal is thrown back into the water to die.

"This is a huge victory for sharks and for the many Canadians, advocacy groups and politicians who joined together to champion the ban of this cruel practice," said Kim Elmslie, the campaign director for Oceana Canada, in a statement.

But the ban has received pushback from local restaurants.

David Chung, the president of the B.C. Asian Restaurant Cafe Owners' Association and owner of a Chinese seafood restaurant in Richmond, said finning is banned in most countries and he doesn’t believe it is widely practiced.

"Most of the fishermen abide by the law. You cannot assume they do that kind of thing. Like, you can’t assume everybody is going to murder everybody else," he said.

The bill is expected to receive royal assent before the House of Commons rises for the summer break.