Can your kid cut class to go to a climate rally? Metro Vancouver schools weigh in 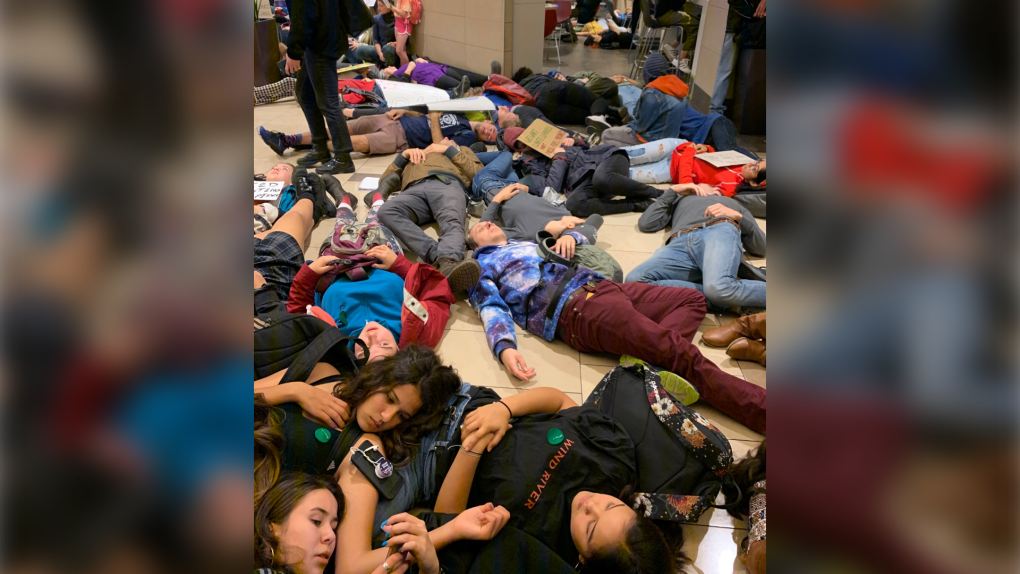 Vancouver youth staged a "die-in" at multiple locations Friday as part of a week of global action against climate change.

With a huge international climate strike scheduled for this Friday, Metro Vancouver school boards are weighing in on whether students will be allowed to attend.

Monday night, the Vancouver School Board voted unanimously to allow students to participate in climate rallies. Students attending a climate strike won't be penalized for missing class, as long as they have their parents' permission.

"There is ample evidence to support the argument that climate change is real and must be taken seriously. As a public school district, we play a crucial role in educating students about global warming and its potential impacts on our planet," said Scott Robinson in a letter posted to the school district's website.

"In many classrooms across the district, climate change will be a topic of discussion this week as teachers engage students in a variety of lessons and activities. I also encourage you, as parents, to discuss this topic and the global advocacy movement with your children."

Just like in Vancouver, Robinson said parents or guardians need to give permission for students to miss class.

The global protests are partly inspired by the work of Swedish teenager and climate activist Greta Thunberg, who has led weekly demonstrations over the past year calling on world leaders to take more action against climate change. She spoke at the UN Climate Action Summit on Monday.

Kicking off a week events, some students attended a "die-in" protest in downtown Vancouver last Friday. Around 200 young people took to the streets.

"The message here is that we see the doom and gloom of the future," said Samantha Lin, an organizer with Sustainabiliteens Vancouver. "We wanted to disrupt everybody's everyday lives while everyone is on their lunch breaks, and we wanted to draw attention that this climate crisis is happening and we can't ignore it anymore."

Experts believe carbon emissions need to be reduced dramatically in order to avoid a climate emergency.

"I feel so ashamed because my generation and our children, the boomers, have partied as if there's no tomorrow. We didn’t think about the world we were leaving," said environmentalist David Suzuki at last Friday's event.

North Vancouver, Burnaby and Surrey school districts posted similar letters to their websites, with some even suggesting teachers could organize events to the rallies as a field trip. As of early Tuesday morning, school districts in West Vancouver, Delta, Coquitlam and New Westminster did not have information about the climate rallies posted publicly.

Meanwhile, Emily Carr University has cancelled all of its classes scheduled after 12 p.m. Friday for the climate strike.

"The climate crisis is a defining issue of our time. We know that many of you care deeply about this global priority and have taken action in your daily lives," said a letter from Emily Carr's president, Gillian Siddall. "We’re inspired by and grateful for your collective efforts to end the climate crisis."

Langara College, University of British Columbia and Simon Fraser University have all posted statements on their websites saying that while students are encouraged to attend climate rallies, classes won't be cancelled and they must speak to their instructors beforehand.

Climate rallies are planned across Metro Vancouver on Friday and a full list of events can be seen on the Sustainabiliteens Facebook page.