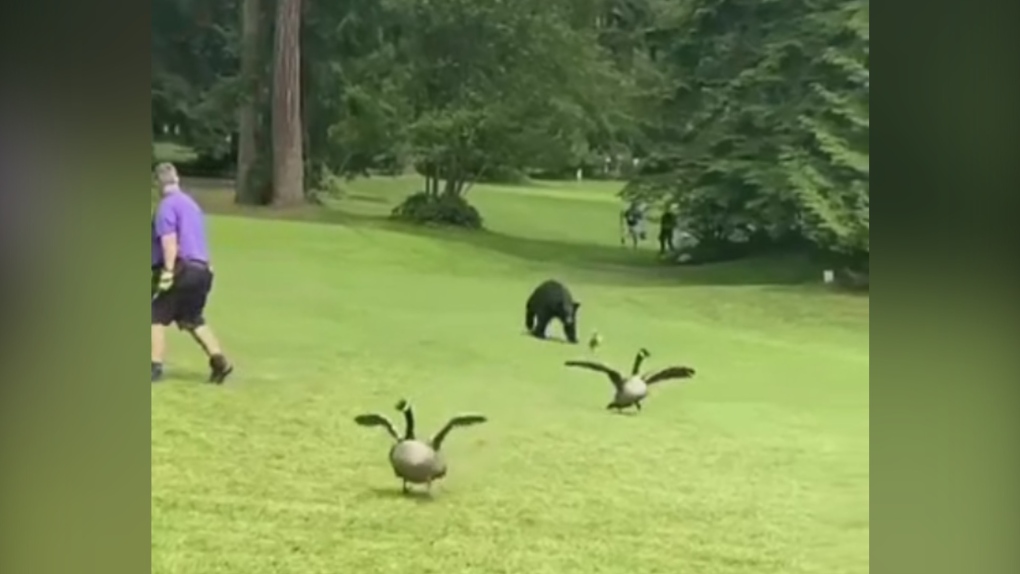 This screenshot from a video posted online shows a black bear on the pitch and putt course at a busy Metro Vancouver Park.

One video posted to Reddit shows a black bear on the pitch and putt course at Burnaby's Central Park. It chases two adult geese and a gosling, the older birds honking and flapping their wings while the younger one is unable to escape and is eventually caught by the bear. The animal comes within feet of people and one can be heard yelling "Get out of the way!"

Another video posted to YouTube shows a bear in the wooded area adjacent to the paved walking and biking path near the SkyTrain tracks. In the three-minute video, the animal slowly ambles out onto the path itself, coming very close to people cycling and strolling.

It is unclear if both videos show the same bear.

The Burnaby RCMP received "several calls" about a bear in the park and attended at least once between 11:15 a.m. and 3:15 p.m.

"In general, the callers stated the bear was not acting aggressively towards members of the public," says spokesperson Cpl. Mike Kalanj in an email, adding the BC Conservation Officers Service was made aware of the calls.

CTV News has reached out to B.C.'s Ministry of the Environment to see what the response was and this story will be updated if more information is received.

Two weeks ago, a black bear was spotted by residents of a neighbourhood on the Vancouver-Burnaby border. Police were called to the scene, where they shot and killed the animal.

The most recent data from the province on reports of black bear encounters is from April of this year. There were 935 calls received, 133 reports investigated, and 23 bears destroyed by the BC Conservation Officers Service. Those are the highest numbers recorded in the publicly available data, which dates back to 2011.

For the second time in less than a month, a resident of Ashcroft, B.C., died while waiting for health care.

Canadian home sales fall for 5th month in a row, down 29 per cent from last July

Canada's average resale home price fell 4.5% from a year ago in July and was down 5.4% on the month as buyers continued to sit on the sidelines amid rising borrowing costs.

A year after the Taliban seized control of Kabul, Canada's resettlement efforts have lagged behind official targets and the efforts to help those fleeing the war in Ukraine. More than 17,300 Afghans have arrived in Canada since last August compared to 71,800 Ukrainians who have come to Canada in 2022 alone.

Padma Lakshmi is supporting her ex-husband Salman Rushdie in his recovery. The 'Top Chef' star tweeted Sunday that she is 'relieved' Rushdie is 'pulling through after Friday's nightmare' in which he was stabbed multiple times while on stage in New York.

Colonial Building in Newfoundland won't be renamed after all: provincial government

The Newfoundland and Labrador government says it will not be changing the name of the Colonial Building in downtown St. John's.