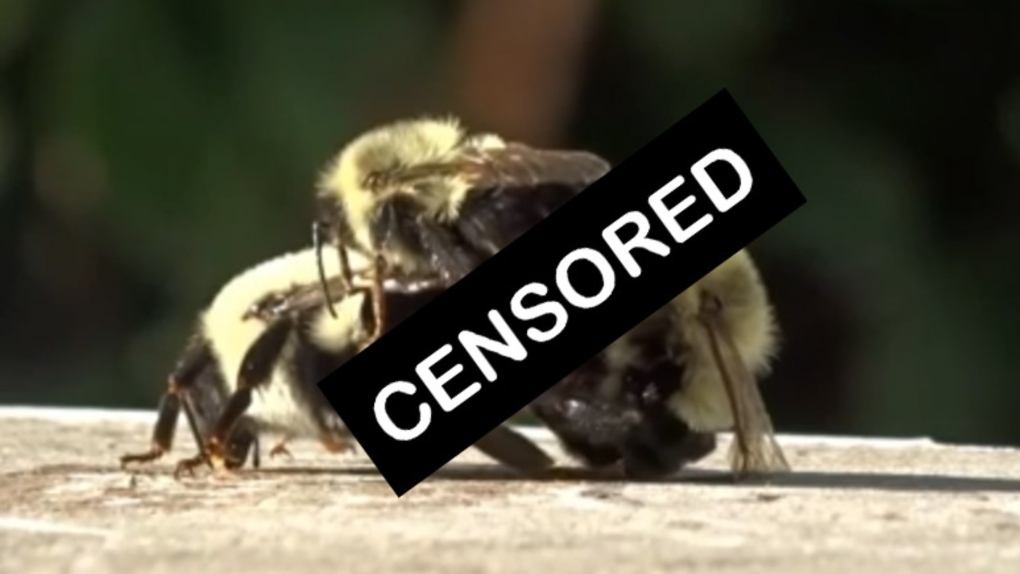 Two drones and a queen bumblebee are seen entangled in a mating incident gone wrong in Richmond, B.C. on Aug. 24, 2020. (Jonathan Alayon/YouTube)

VANCOUVER -- You don't have to go far to witness the wonders of the natural world in B.C.'s Lower Mainland.

For Jonathan Alayon, all it took was a stroll past the recycling bins outside his Richmond home. That's where he caught a glimpse of a rare and fascinating natural phenomenon: bumblebees engaged in three-way sex.

"I put the camera down and I waited and waited for them to get it over with," Alayon said Tuesday.

After doing some research online, Alayon discovered just how unusual the encounter was. Bumblebees usually mate for a matter of seconds, while his recording lasts about 33 minutes.

Alayon decided to upload the video to YouTube, giving it the eye-catching headline of "Longest bee sex of 2020 by far, caught on camera."

He also shared the video with CTV News. Alayon said he wanted to promote public appreciation of bees, which play an important role in food production. They're also rapidly dying out across North America and Europe, a problem blamed on human-caused climate change.

"You gotta promote the bees," Alayon said. "They work hard. They don't have a union. I don't think they take any breaks, I think they got to slow down."

Leonard Foster, a honey bee researcher at the University of British Columbia, said the video is indeed an interesting find. What it captured was two smaller male drones simultaneously mounting a queen, an act Foster said was actually more awkward than amorous.

Foster said the males were probably fighting over the queen and accidentally penetrated her at the same time, which left the three of them trapped mid-coitus.

While "bee-ways," as one might call them, are fairly rare, Foster said people actually have a better chance of witnessing them than normal bee mating. That's because bees usually stay airborne during sex – but three's a crowd, and entangled groups of bees tend to come crashing down to earth.

"When there's three involved, everybody is in everybody else's way," Foster said. "Whereas most of the bee mating you never get a chance to see because it happens in places where humans are not."

"What makes this one different, as the videographer suggested, is the length of time. Usually bees are able to separate themselves (faster) and go on their way," Foster said.

Though three-ways are strictly accidental, bumblebee queens do mate with dozens of drones. Foster said a queen will collect a male's sperm and store it in her body so once she's eventually laid an egg, she's able to fertilize it herself.

The bee researcher also noted the drones involved in Alayon's video likely died shortly after he stopped recording. The bumblebee mating process ends with the male's abdomen being ripped out.

"It didn't all end happily for everyone involved there," he said.