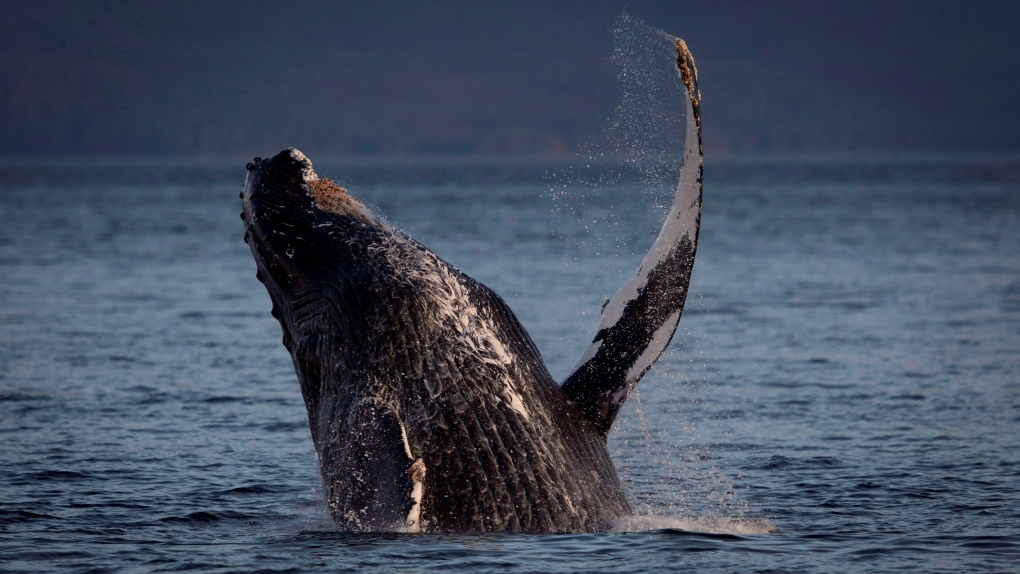 File photo: A humpback whale breaks through the water outside of Hartley Bay along the Great Bear Rainforest, B.C., Tuesday, Sept, 17, 2013. (Jonathan Hayward / THE CANADIAN PRESS)

VANCOUVER -- A B.C. whale watching group thinks a close encounter over the weekend may be because the humpbacks are used to being touched by humans.

Eagle Eye Adventures posted a video of the encounter Sunday on Facebook. See the video below.

The Campbell River, B.C., based group wrote that those in the boat had been watching the whales off the coast from a distance of about 125 metres.

But then the whales approached them, the group wrote.

Staff speculated that the whales may be so comfortable with humans because of encounters they've had further south.

"We suspect that these whales are being petted in Mexico area and so they are used to boats and people," the Eagle Eye Adventures wrote.

"We do not pet them, we just let them do their thing and after a while they will take off again."

The post described the experience as "pretty cool," and "once in a lifetime."

Several sightings of humpbacks have been caught on camera recently, including an incident in the Vancouver harbour earlier this month.

A breaching humpback was seen from a Burnaby retirement home with a view of the Burrard Inlet.

The video shows the massive whale rising from the water, then crashing back down. It's not far from a sailboat.

A whale conservation group told staff at the retirement home that it's rare to see humpbacks that far in the harbour, and a breach has never been reported.

And a boater sent video to CTV News showing a humpback whale in Howe Sound.

The whale was seen close to the shore of Keats Island, between Bowen Island and Gibsons.