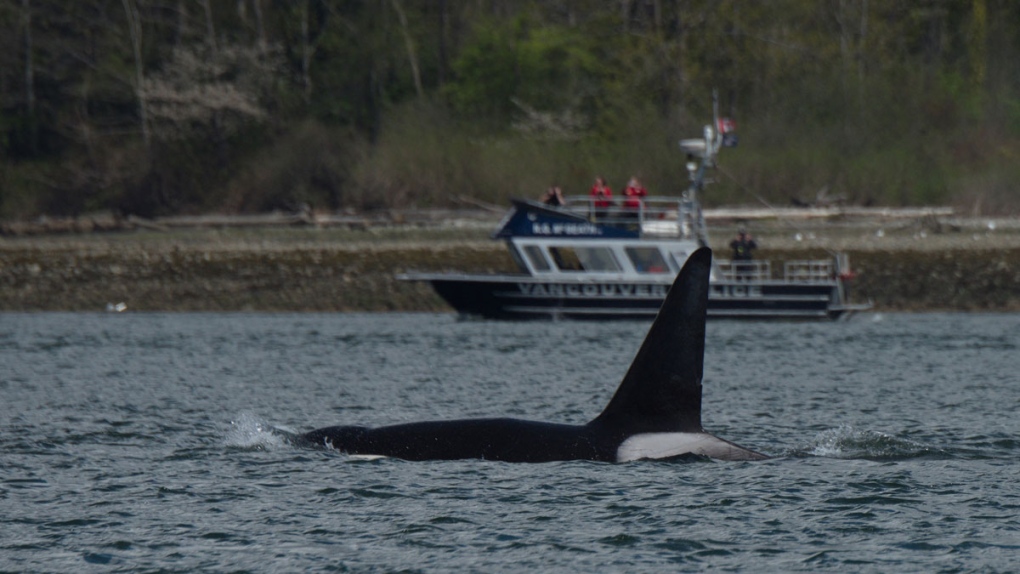 A transient orca is seen in an image provided by Ocean Wise.

A pod of transient orcas was spotted in the Vancouver Harbour earlier this week for the second time in April.

The Bigg's killer whales swam into the harbour on Tuesday to hunt seals, Ocean Wise said in a statement Thursday that included photos and video of the orcas.

The sighting came exactly one week after the orcas were spotted swimming near the Ironworkers Memorial Bridge.

Also in April, a group was spotted in the Strait of Georgia by whale watchers.

Bigg's whales feed on marine mammals including seals, sea lions, dolphins and other whales. Experts believe the amount of available prey in the waters off B.C.'s coast is the reason behind an increase in sightings.

"Harbour seals are popular prey for these apex predators and they’re discovering hotspots where they can find an abundance of them — it appears the Vancouver Harbour might be one of those spots," Lance Barrett-Lennard said in the statement.

Barrett-Lennard is the director of Ocean Wise's Marine Mammal Research program. Members of his team used the whales' distinctive dorsal fins and saddle patches to identify the whales as part of the T049A group.

It is not the same group of Bigg's that was spotted last week, Ocean Wise said.

Barrett-Lennard and his team are conducting a multi-year study of the whales that swim in the northeast Pacific Ocean, using an unmanned aircraft to collect images that are then used to monitor growth and changes in body condition.

Their aim is to determine whether their basic nutritional needs are being met, and whether changes to salmon population are impacting the whales.

In addition to transient orcas, they're also studying northern and southern resident killer whales and humpbacks.

In Thursday's statement, the research team spoke out against recent calls from fishermen for a seal cull to protect salmon.

"A cull of the seal population in the Salish Sea will negatively impact mammal-eating killer whales, and because seals eat more salmon predators than they do salmon, it could even harm the fish-eating whales."