B.C. to introduce legislation that would stop the time change 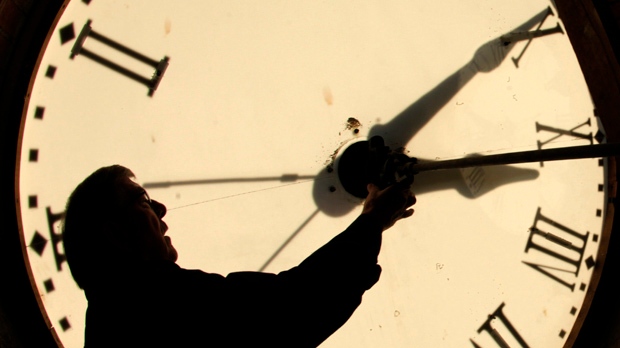 Custodian Ray Keen checks the time on a clock face after changing the time on the 97-year-old clock atop the Clay County Courthouse, in this Nov. 6, 2010 file photo taken in Clay Center, Kan. (AP Photo/Charlie Riedel)

VANCOUVER - The provincial government will introduce legislation Thursday that could effectively end the time change.

B.C.'s attorney general confirmed the update Wednesday. However, residents of the province will still set their clocks back this weekend, even if the bill is passed.

A daylight time poll commissioned by the province suggested a whopping 93 per cent would prefer to scrap the time change.

Most said health and wellness was the main reason, followed by more daylight during the winter evening commute and safety reasons.

Those who wanted to keep the current system said their biggest concern was balancing daylight hours through the year.

"One of the issues that's been raised in the engagement is ensuring we're on a consistent time zone along the west coast of the United States," Attorney General David Eby said.

"It's a huge market for us. We're an export-dependent economy so that's a consideration, as is the reality of many British Columbians with small kids."

Parents have raised concerns about the time change, as children often struggle with its impact on their sleep cycle.

The survey asked only if residents of B.C. wanted to keep daylight time year round. It did not ask if they wanted to stop the time change during standard time.

Daylight saving time is in effect from March to November. Clocks are moved forward an hour in the spring, then set back in the fall.

If the legislation introduced this week is passed, it would not come into effect immediately.

British Columbians would reset their clocks in the spring, then might leave them permanently if it takes effect in 2020.

Oregon and Washington are also considering making similar changes. While legislation has been introduced in those states, federal approval is needed to move to DST permanently.

California was considering permanent daylight saving time, but the bill was put on hold in September.

With files from CTV News Vancouver's Bhinder Sajan in Victoria