The largest public engagement in B.C. history shows people are fed up with changing their clocks twice a year.

More than 223,000 residents answered a government call for input, and a whopping 93 per cent said they preferred to keep the time the same year round.

Most said health and/or wellness reasons were behind their decision, followed by having more daylight during the winter evening commute and safety reasons. 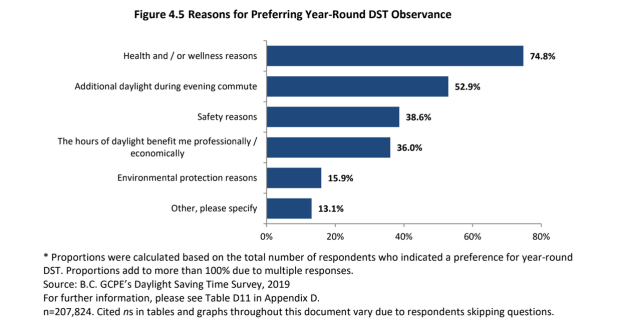 Those who wanted to keep the system we have now said their biggest concern was balancing daylight hours through the year, followed by health or wellness concerns and safety reasons.

A criticism that showed up often in the survey asked people if B.C. should keep daylight saving time year-round. Keeping standard time year-round wasn't an option.

When it came to what time to keep, opinions were split. A slight majority of survey respondents also said the time should match up with other west coast states, while the rest said B.C. should decide for itself.

California, Oregon and Washington are all considering making similar changes. While legislation has been introduced, federal approval is needed to move to DST permanently.

Forty-four per cent of respondents were from the Lower Mainland, 28 percent from Vancouver Island/Sunshine Coast and 15 per cent from the Thompson-Okanagan region.

The survey analysis found no significant difference in terms of demographic sub-groups; across the board, a vast majority supported the idea of one time zone, all year round.

The consultation period ran from June 24 to July 19 and people offered their opinions via an online survey or formal submissions. The government said there's never been a consultation with a higher level of engagement.

Read the final report below.