B.C. still on its own using carbon tax to fight climage change 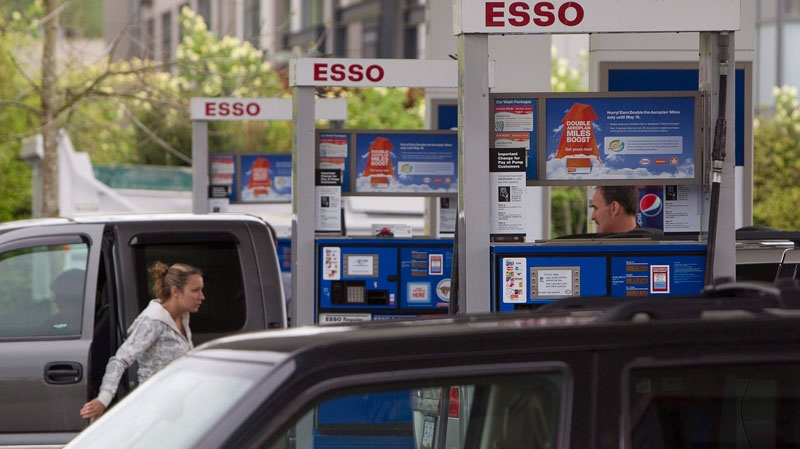 Motorists get gas at a station in North Vancouver, B.C. Tuesday, May 10, 2011. (Jonathan Hayward / THE CANADIAN PRESS)

British Columbia's carbon tax reaches its third anniversary on Canada Day, and that means paying another penny more per litre of gasoline for the fight against global warming.

Some consider that a small price -- perhaps too small -- in the war against climate change, while others suggest B.C. has been the lone soldier in the climate war for too long and it's time to consider a retreat.

"The problem for British Columbia is that we are dancing alone: we are the only jurisdiction in North America to levy a broadly-based carbon tax that rises over time," said Jock Finlayson, spokesman for the Business Council of B.C.

"An ever-increasing made-in-B.C. carbon tax isn't sustainable if other provinces and states decline to follow the same path."

B.C. introduced its carbon tax in 2008, starting at about 2.4 cents per litre of gasoline and other fuels as part of former premier Gordon Campbell's plan to legislate cuts to greenhouse gas emissions by more than 33 per cent by 2020. Gradual increases are built into the legislation.

On July 1, the carbon tax on gasoline will increase to 5.56 cents per litre from 4.45. It was originally slated to rise to 7.24 cents per litre next July, but recent government estimates peg the increase at about 6.8 cents per litre, or $30 per tonne in 2012.

The most recent statistics provided in the government's Greenhouse Gas Inventory Report indicate the province has a long way to go to meet its reduction targets.

He said he still favours a go-slow approach to the tax, maintaining the current annual $5 per tonne increases, to allow business and residents to continue getting used to paying a price for carbon emissions.

Weaver, who was part of a government-appointed committee that helped develop and oversee the Liberal climate agenda, said he supports the carbon tax completely but believes using the name carbon tax was a mistake.

"When you mention the t-word, people freak out," he said. "I remember talking to former premier (Campbell) about this and he said to me straight to my face, 'you know what, the only thing I regret about the carbon tax is calling it a tax."'

But the business council, one of the largest business organizations in the province, says there's a bigger problem with the carbon tax than its name. It's a dollars and cents issue that hurts B.C. businesses.

Finlayson said the carbon tax is unfair because B.C. businesses pay the carbon tax while their competitors outside of the province do not. Although the levy is "revenue neutral," meaning carbon tax revenues are returned to businesses and taxpayers in the form of tax breaks, most businesses still balk.

"The expectations, I think, B.C. had a few years ago was that other jurisdictions, including in North America, would be following suit quite quickly, and so far that hasn't been happening," he said.

But Matt Horne, a climate expert at the Pembina Institute, said some businesses are starting to use the carbon tax to their advantage. He said the University of British Columbia, University of Northern B.C. and the resort community of Whistler have all embarked on energy efficiency projects that have cut their energy costs.

"There are a bunch of projects around the province where the business case is definitely made better because of the carbon tax," he said. "It's an important driver on those projects happening."

He said recent polling indicated British Columbians are supportive of the carbon tax, and there is disappointment among environmentalists that no other North American jurisdictions have followed B.C.'s lead and instituted their own.

There are no scheduled carbon tax increases after 2012. The current government budget forecasts $740 million in carbon tax revenues this year and $950 million next year.

Horne said B.C.'s carbon tax must increase substantially if the province is going to achieve its greenhouse gas reduction targets. A January 2010 report by the Pembina Institute and others suggested a carbon tax rate of $200 per tonne by 2020, about 44.5 cents per litre of gasoline.

"There's some evidence that it's starting to work at a relatively low price, but the idea behind a carbon tax is you start at a slow rate and you send a clear signal it's going to consistently and predictably rise over time," said Horne.

Finlayson said it's those kind of numbers that make the carbon tax unattractive to business and most politicians.

The three major provincial parties in Ontario -- the governing Liberals, the Conservatives and the NDP -- have explicitly vowed not to introduce a carbon tax in that province if they win the upcoming provincial election, he said.

"This suggests that B.C., with its escalating carbon tax, is out of step with prevailing sentiment on the issue in Canada and the U.S.," he said.

Yet even in B.C., the carbon tax landscape continues to shift.

The Liberals, under Gordon Campbell, seemed unlikely champions of an environmental levy but the New Democrats' "axe the tax" campaign played a major role in the party's 2009 electoral defeat, backfiring as prominent environmentalists like David Suzuki urged voters to support the Liberals or the Greens over the tax-fighting Opposition.

The party has since acknowledged that their anti-carbon tax campaign was a failure and they now support a carbon tax.