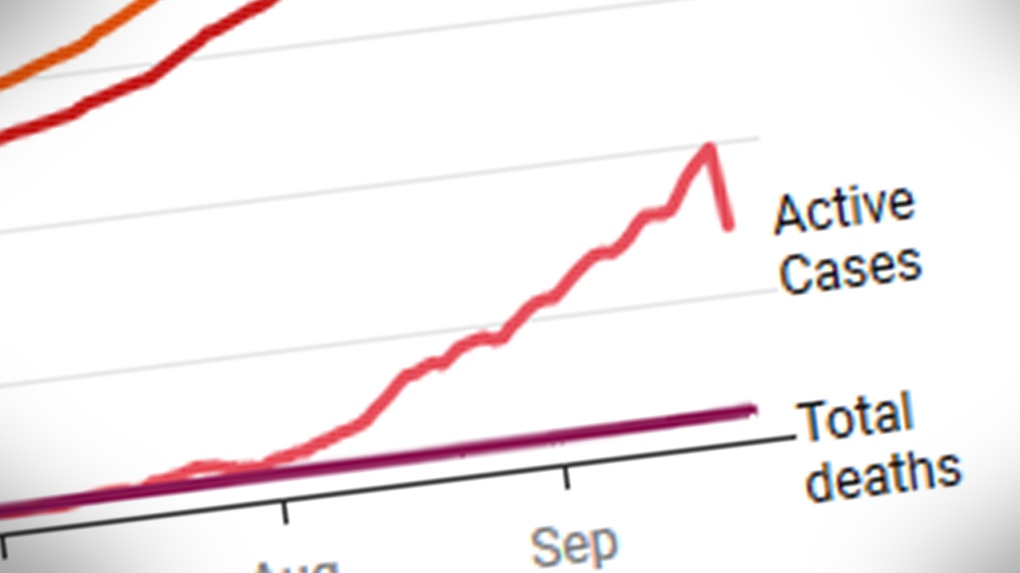 VANCOUVER -- Tuesday's COVID-19 update for British Columbia wouldn't have been particularly striking, if not for an unusually large drop in active cases.

Even though officials announced another 96 infections, the province's active caseload plummeted to 1,465, down from 1,987 on Monday.

That's a drop of 522 cases, or about 25 per cent of the caseload – a sharp decline that's unprecedented in B.C., where active case numbers have usually been fairly stable whether they were going up or down.

The cause? An equally unheard of spike in recoveries. B.C.'s total number of recovered cases jumped to 6,589 on Tuesday, an increase of 617 from Monday.

The Ministry of Health told CTV News that was largely the result of a delay in the reporting of recovery data in the Vancouver area.

"The large shift in today's total recovered cases reflects Vancouver Coastal Health's delay in notifying (the B.C. Centre for Disease Control) of recovered cases in the last month, while they transitioned to a new data collection system," a spokesperson said in an email.

"The system is now fully implemented and the data is up to date. All cases were assessed and cleared by public health from isolation at the appropriate time."

Previously, the highest number of recoveries announced in a single day was 121 cases back in March.

Vancouver Coastal Health continued reporting new COVID-19 cases from the region during its transition to a new data collection system. A spokesperson for the health authority told CTV News that teams prioritized new case data and case management over recoveries.

"Once the system was fully implemented and we were confident in it, our contact tracers had to go in and manually enter the cases that have been removed from isolation," the spokesperson said in an email.

"It was strictly a data reporting issue. No one was left in isolation longer than they needed to be."

The majority of recovered cases that were added during Tuesday's update were for people cleared since Sept. 14, according to the health authority.