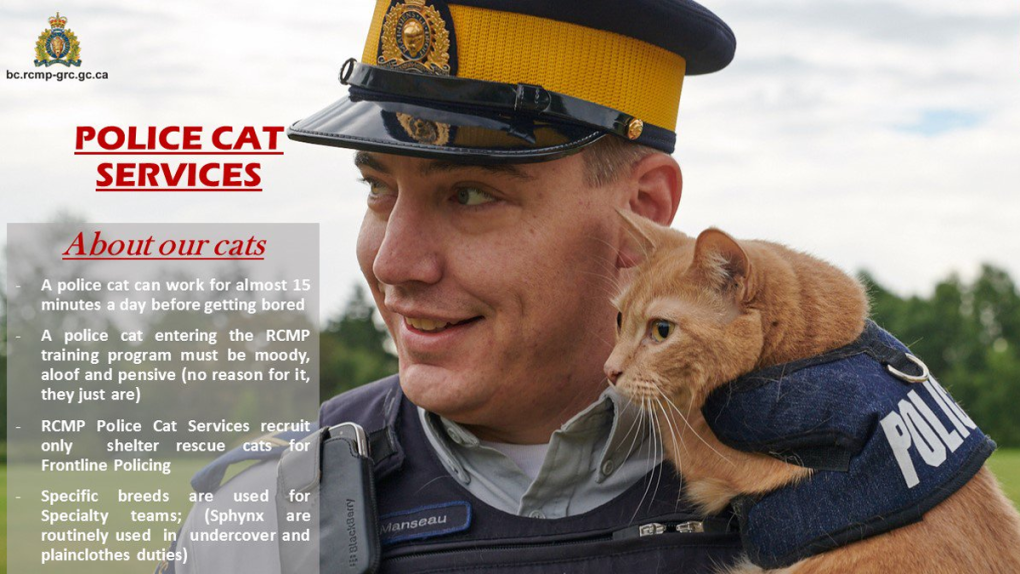 The B.C. RCMP's newest recruits are furry, feisty and can work "almost 15 minutes a day before getting bored" – or they could, if they weren't just another April Fools' Day gag.

"A police cat entering the RCMP training program must be moody, aloof and pensive (no reason for it, they just are)," the B.C. RCMP said in a tweet.

It was just one of several pranks pulled by police across the Lower Mainland this year. The Ridge Meadows RCMP detachment debuted a new hot air balloon for surveillance, dubbed the Federal Air Reconnaissance & Crime Enforcement vehicle – or F.A.R.C.E.

"This immediately confirmed our expectations that hot air balloon technology will enhance our covert approach methods, when attending crimes in progress, through its stealth-like and peaceful presence," Hyland said in a statement.

The Ridge Meadows detachment added the balloon will help cut back on rising fuel costs while offering a "greener and more environmentally friendly" kind of tactical police response.

Further east in Abbotsford, police apologized for an bring-your-pet-to-work initiative that had supposedly gone awry.

The department released a staged video of the station overrun with animals, including multiple snakes, a tarantula, a chicken and a horse.

Abbotsford police said it's cancelling the program due to "overcrowding… allergies, and an overabundance of love and attention showered on our pets," but assured it's moving forward with its very real therapy dog project.