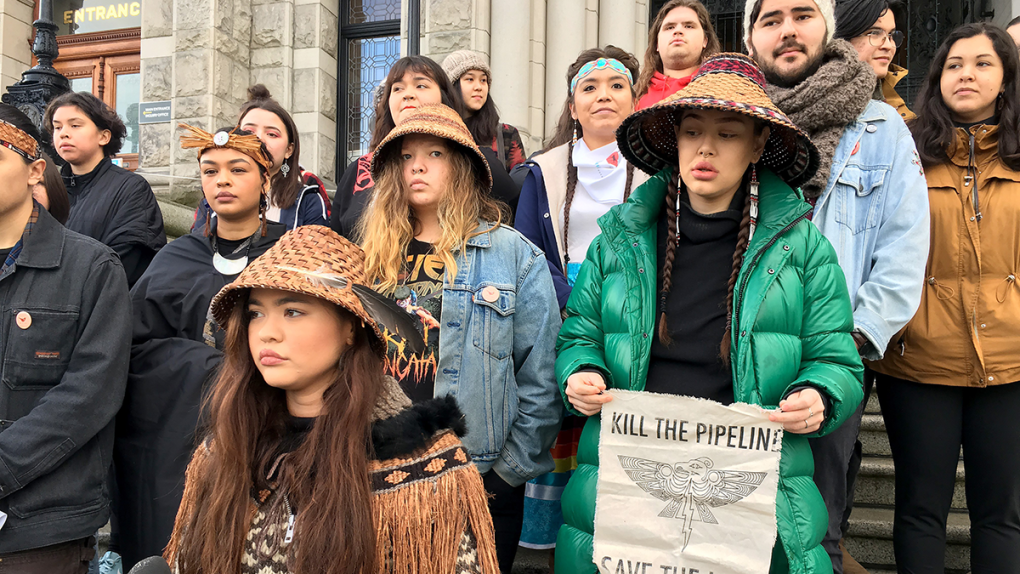 Ta'Kaiya, front, and Sii-am Hamilton, holding a sign, are seen standing with Indigenous youth demonstrating support for the Wet'suwet'en hereditary chiefs in northwest B.C. opposing the LNG pipeline project, in front of the B.C. legislature in Victoria on Friday, Jan. 24, 2020. (Dirk Meissner / The Canadian Press)

Cullen represented Skeena-Bulkley Valley, a sprawling part of northern British Columbia that includes the Wet'suwet'en traditional territory, until last year when he decided not to seek re-election.

The premier's office says Cullen will work with Wet'suwet'en leaders, the RCMP, Coastal GasLink, the provincial public sector and other parties.

It says he will focus on de-escalating the conflict surrounding a court-ordered injunction regarding the company's access to a forest service road outside of Houston.

Supporters of the clan chiefs felled trees along the road and built encampments after the chiefs issued an eviction notice to the company soon after the injunction was granted.

Premier John Horgan says in a statement that he's pleased all parties have agreed to the appointment of a liaison.

"Nathan has agreed to act as an intermediary in the hopes of finding a solution to this challenging dispute," Horgan says.