'Stand up, fight back,' Indigenous youth chant at anti-pipeline protest 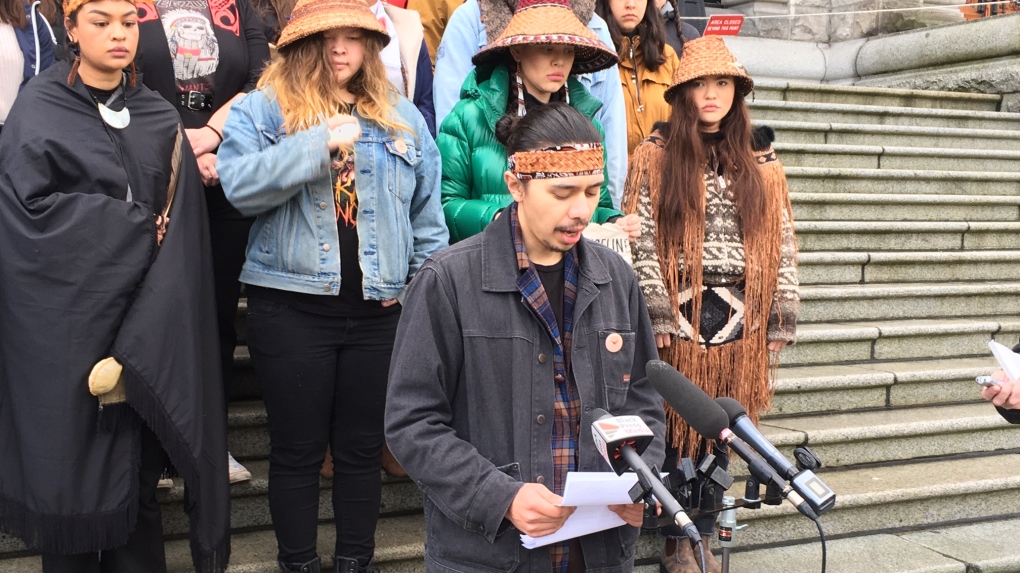 VICTORIA -- Indigenous youth who rallied at the British Columbia legislature say their arrests earlier this week are minor when compared to the sacrifices of hereditary Wet'suwet'en chiefs who oppose a liquefied natural gas pipeline running through their traditional territories.

The protest comes two days after Indigenous youth occupied a B.C. government Energy and Mines Ministry office that ended when Victoria police arrested 13 people. Four of those arrested spoke during the protest on Friday.

Ta'Kaiya Blaney, 18, said she was arrested by police at the ministry protest but has yet to be charged. She said Indigenous youth back the hereditary chiefs who are protecting lands that will ensure the survival of their people.

“When you attack one, you attack us all,” she told the crowd. “We, as Indigenous youth, know that what Canada is willing to do to Wet'suwet'en people is a demonstration of the measures they are willing to go to bulldoze and destroy Indigenous lands in the name of profit and industry.”

RCMP arrested 14 people at a Wet'suwet'en protest camp in northwest B.C. last January and police are now back patrolling the same area.

The youth protesters at the legislature chanted “stand up, fight back.”

Sii-am Hamilton, 25, said she was also arrested at the ministry office.

“What we are doing right now is we are standing in solidarity with our relatives because we know what they have created at that camp is setting precedence for the rest of the world,” she said. “They are defending the land.”

The hereditary chiefs from the Wet'suwet'en Nation near Smithers say the 670-kilometre Coastal GasLink pipeline project does not have their consent. Supporters of the chiefs felled trees along a road to a Coastal GasLink work site and are building a new support camp.

A B.C. Supreme Court judge extended an injunction against Wet'suwet'en members and anti-pipeline supporters on Dec. 31. It authorizes RCMP to arrest and remove anyone they have reasonable or probable grounds to believe is knowingly in contravention of the order.

Horgan said last week the courts ruled in favour of the project and the rule of law will apply to ensure work continues on the pipeline, which would start near Dawson Creek and extend to an export terminal at Kitimat.

The pipeline is part of the $40 billion LNG Canada project and has received approval from 20 First Nations along the pipeline route, said Horgan.

“When you say that the project is proceeding and that the rule of law must apply in B.C., you are citing a court ruling that effectively says Indigenous law is ineffective,” he said. “It should also be noted that in this country the rule of law has also included the potlatch ban and the residential schools.”