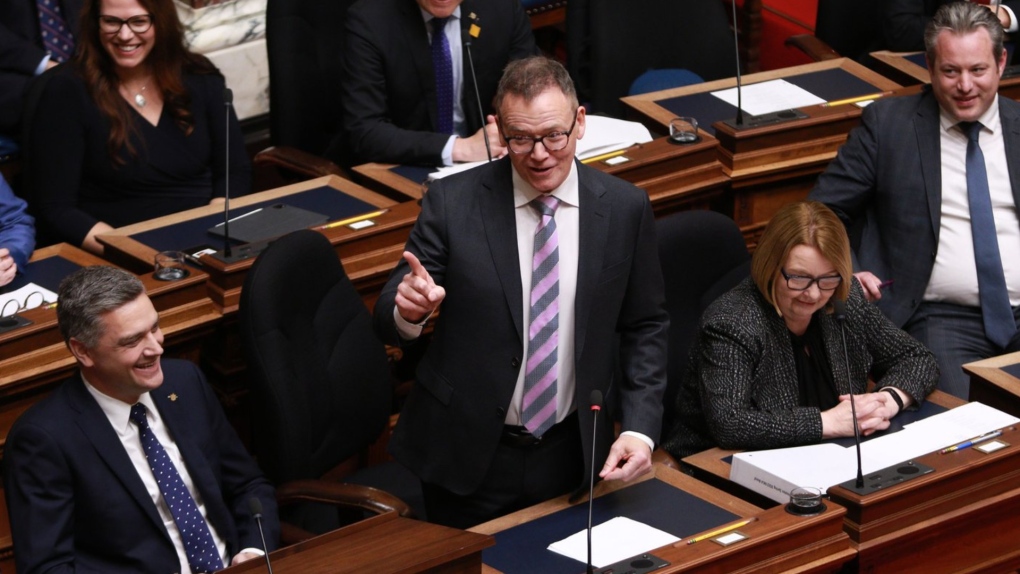 Opposition B.C. Liberal party Leader Kevin Falcon gives a speech following his oath ceremony and introduction in the legislative assembly in Victoria on May 16, 2022. Liberal party members are gathering in Penticton this weekend for a convention where they will welcome Falcon and map strategy ahead of the next election, possibly under a new party name. THE CANADIAN PRESS/Chad Hipolito
Victoria -

Members of British Columbia's Liberal party are set to gather at a convention in Penticton this weekend to welcome new leader Kevin Falcon and map strategy ahead of the next election, possibly under a new party name.

Falcon, who won the leadership race earlier this year, promised to renew and rebuild the party in a “root-to-branch” process that includes Saturday's vote to begin a process that could see the Liberals running under a new name in the scheduled fall 2024 provincial election.

“We've got to leave this in the party's hands, and I think that's the best place to do it,” said Liberal Trevor Halford, who represents the Surrey-White Rock riding in the legislature.

“I can tell you what I've heard is there's a strong appetite to look at what the options are and see that potential for change,” he said in an interview from Penticton.

About 800 delegates are registered to attend the Penticton convention and launch a process that could result in the name change.

The B.C. Liberals are not affiliated with the federal Liberal party and have described themselves as a “made-in-B.C. free enterprise coalition.”

“We've always been most successful when we're united,” said Halford. “When we're together, and that's federal Liberals and federal Conservatives, coming together and understanding that a provincial government is much better run than what we're seeing under the NDP.”

“For many, many years there has been a large group of the membership that has wanted to see a name change,” she said. “Part of how you express your identity as a party is through your name.”

Polak, a former four-term MLA for Langley, where federal Conservative roots are deep, said she often had to explain to constituents during elections that she was not running for the federal Liberals.

“Sometimes I'd knock on the door and the homeowner would come out and say, 'Mary, have you switched allegiances?”' she said.

The Liberals were reduced to 28 seats in the province's 87-seat legislature in the last election but are coming off a spring legislative sitting where they challenged the New Democrat government on health-care issues and plans to embark on a major museum rebuilding project.

“We are seeing a government that's focused on a billion-dollar museum when we've got schools that have not been seismically upgraded. We've got one in five people who cannot find a family doctor, almost one million people,” Halford said.

The recent political performance of the Liberals in the legislature, the new leader and the lifting of COVID-19 restrictions to permit gatherings have contributed to a family reunion atmosphere at the convention, he said.

“We are focused on the next step and the next step is to become government,” Halford said. “We've got a very, very energized group right now that's seen the massive cracks that are showing in this NDP government.”

Falcon is scheduled to address the convention on Sunday.

This report by The Canadian Press was first published June 10, 2022.

Tyre Nichols' fatal encounter with police officers in Memphis, Tenn., recorded in video made public Friday night, is a glaring reminder that efforts to reform policing have failed to prevent more flashpoints in an intractable epidemic of brutality.