VANCOUVER -- A Craigslist ad selling a bicycle and some bike accessories comes with a racial prerequisite.

The ad says, “‘Enough’ black lives murder I will only sell this to a visibly lily-white person as I am plain & simple.” The ad showed the poster’s location to be in New Westminster.

A Vancouver man who came across the ad says he was shocked by the overt racism.

"So obvious it's racist and offensive to non-white people," the man says. He doesn't want to be identified because he's concerned there will be retribution.

He says he felt compelled to speak out because racism should not be tolerated.

"To me, Vancouver is a place where many nationalities live together, like a beautiful flower garden….and this guy's behaviour is like a bad weed, it needs to be removed."

He says he's in the market for a foldable bike but even if the poster had what he wanted, he wouldn't buy it from them.

"If he says that kind of thing, I'm not going to buy it. If I'm white, I don't think I'd buy it either because it's inappropriate," he says.

In a response to CTV News, the poster, who did not identify themselves, says the objective of the post was to “cause discussion.”

The person also doubled down on their stance.

“I'm an innocent railroaded #metoo victim and now with all this black lives murder and such my attitude has worsened, no-women, no-blacks for me, no queers, piss me off more and I'll keep going,” they wrote in an email. "Tired of trying to appease everyone whether they deserve it or not.”

The ad was removed shortly after CTV News received a response from the poster. 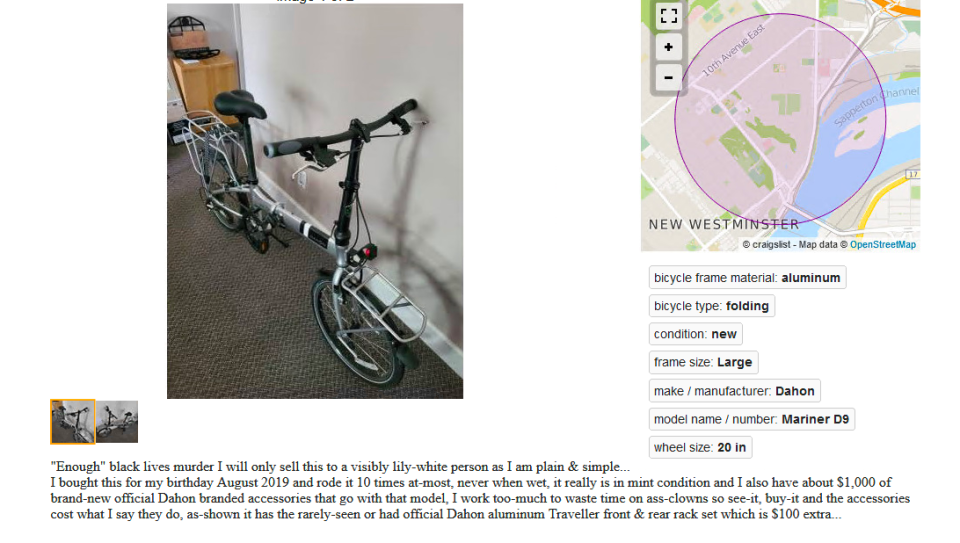 Claire Atkin, co-founder of CheckMyAd.org, says the challenge of filtering Craigslist ads is many users are not providing their contact information, unlike a traditional classified.

“The biggest challenge with Craigslist is anonymity,” Atkin said. “[Craigslist does] their best to enforce some minimal Terms of Service but it's generally a laissez-faire kind of environment.”

She added this challenge is not unique to Craigslist. Many other communication companies, like Facebook, Twitter and WhatsApp, have been struggling with moderation since their inceptions.

“They didn't understand that they had to be very responsible about what was happening on their platforms,” Atkin said. “It’s making it very easy for propaganda and hate speech to spread.”

Atkin says the solution for regulating hateful ads and comments is twofold: tech and human solutions.

The tech solution would be implementing keyword blockers that would flag derogatory words and slurs, followed by employees who would filter the questionable ads and take action to remove those posts.

“[Companies] are making a lot of money off of our usership, and they need to be responsible for keeping users safe,” Atkin said.

There is now growing pressure from corporations to compel online companies to take a stronger stance against hate speech.

“We're in a political situation where because of the breakdown, or because of the lack of governance on tech platforms, private companies are actually having to start to take a stand on where they sit on lively political issues,” Atkin says. “[Consumers] are saying, ‘Hey, are your ads funding hate speech? Are they funding racism?’ Brands are having to take a stand on that.”

Craigslist did not respond to a request for comment in time for deadline. CTV News Vancouver will add their response to this story if we receive one.