The B.C. Centre for Disease Control reported 366 test-positive COVID-19 patients in hospital on Thursday, but the centre now says that total was incorrect, and should have been higher.

"The COVID-19 dashboard was mistakenly updated with incomplete data for the number of cases currently hospitalized in Vancouver Coastal Health on Aug. 18," a BCCDC spokesperson said in an email Friday evening.

The correction came after CTV News inquired about an unusual pattern in the data. While the overall hospital population had declined from 385 on Aug. 11 to 366 this week, hospitalizations had actually grown in three of the province's five regional health authorities.

Of the two health authorities that saw their hospital populations decline, Island Health showed a modest decrease, from 72 people in hospital with COVID-19 to 66.

Vancouver Coastal Health, meanwhile, had plummeted. The dashboard showed that health authority – which is home to nearly 400,000 more people than Island Health – also had only 66 COVID-19 patients in its hospitals. On Aug. 11, it had 111.

The purported 45-patient drop meant Vancouver Coastal Health single-handedly accounted for the entire province-wide decline in hospitalizations during the week.

The data on the dashboard has since been corrected. It now shows 390 people in B.C. hospitals with COVID-19 this week, and Vancouver Coastal Health's share of the total has been revised to 90.

The BCCDC apologized for any confusion created by the error.

As a result of the correction, the trend in B.C.'s hospital population no longer looks like a gradual decline, but rather a plateau, as seen in the following graph. 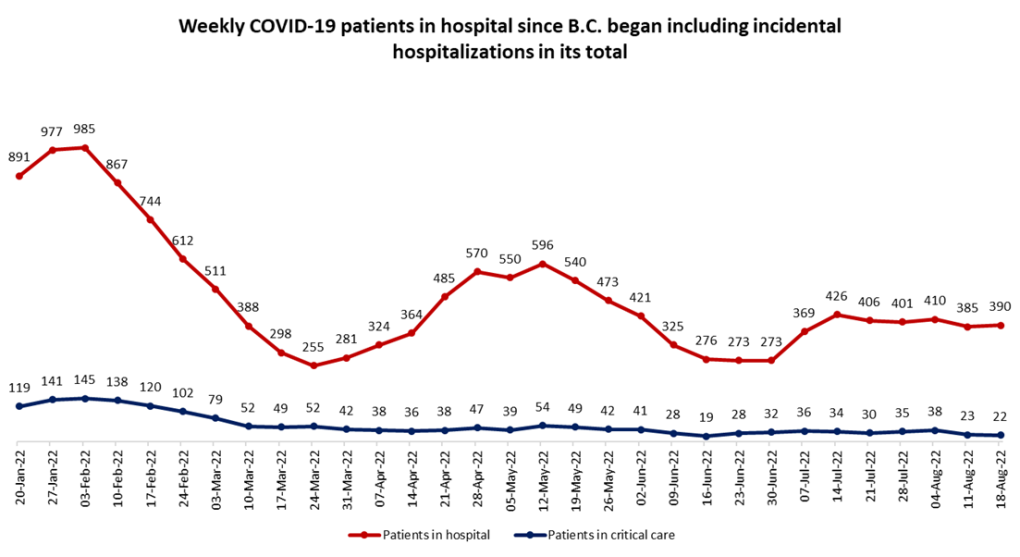 This graph shows the number of COVID-positive patients in B.C. hospitals on Thursdays since the province switched to a "hospital census" model for counting them in January. (CTV)

As mentioned, the number of COVID-19 patients in hospitals in Fraser Health, Interior Health and Northern Health all increased this week, with Interior Health hitting its highest total since May: 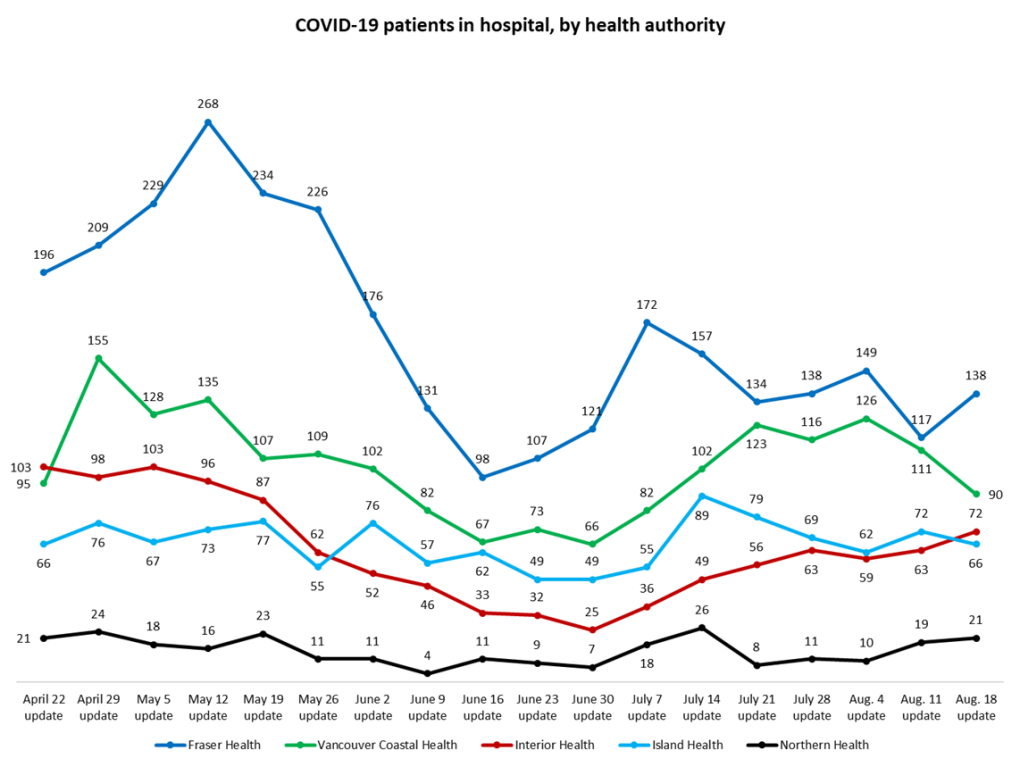 This graph shows the number of COVID-positive patients in hospital in each health authority on Thursdays since April 22. (CTV)

The number of coronavirus patients in B.C. hospitals reported each week includes both those who have serious cases of COVID-19 and those who are admitted to hospital for other reasons and test positive incidentally.

Since the province began counting hospitalizations this way in January, there have been as many as 985 and as few as 255 patients in hospital when the BCCDC's weekly updates are released on Thursdays.

Prime Minister Justin Trudeau visited Monday the graves of victims of a deadly stabbing rampage at a Saskatchewan First Nation before he was to meet with family members in private.

A former employee of Quebec's power utility who is charged with spying on behalf of China was granted bail Monday while he awaits trial.

After a surge of RSV cases among children overwhelmed hospitals across Canada in recent weeks, one infectious disease specialist explains how the respiratory virus can affect vulnerable adults.

The world's largest active volcano spewed some ash and lava Monday and officials warned residents of Hawaii's Big Island to prepare for the possibility of a larger eruption.

The white gunman who massacred 10 Black shoppers and workers at a Buffalo supermarket pleaded guilty Monday to murder and hate-motivated terrorism charges, guarantying he will spend the rest of his life in prison.