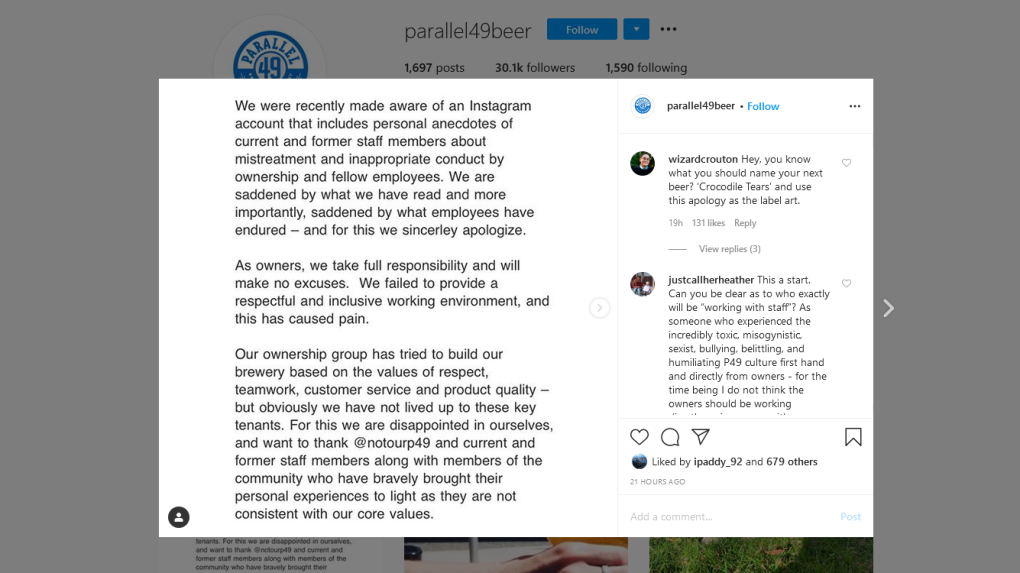 VANCOUVER -- A B.C. brewery issued a public apology over the weekend after allegations surfaced on social media of what it calls "mistreatment and inappropriate conduct."

Those behind the account say it was created for people who worked at the brewery and wished to share their stories anonymously.

In five days, 40 posts have been shared detailing a range of allegations against the brewery and the East Vancouver pub St. Augustine's.

People identifying themselves as employees claim they witnessed "racist and transphobic actions" while working for the company.

Other posts outline allegations of sexism, homophobia and misogyny. Many describe the workplace as "toxic."

The brewery responded to the messages in an apology posted on Instagram Sunday. It did not confirm or address specific accounts, but thanked those behind the post for "bravely" sharing their experiences.

"As owners, we take full responsibility and will make no excuses. We failed to provide a respectful and inclusive working environment, and this has caused pain. Our ownership group has tried to build our brewery based on the values of respect, teamwork, customer service and product quality – but obviously we have not lived up to these key tenants."

The post, which has been "liked" by several hundred Instagram users, was met with criticism by some.

Some wondered what actions the brewery will be taking, likening the apology to "crocodile tears."

Others – including the account that prompted the apology – said it wasn't enough, but some thanked the brewery for taking responsibility in its post.