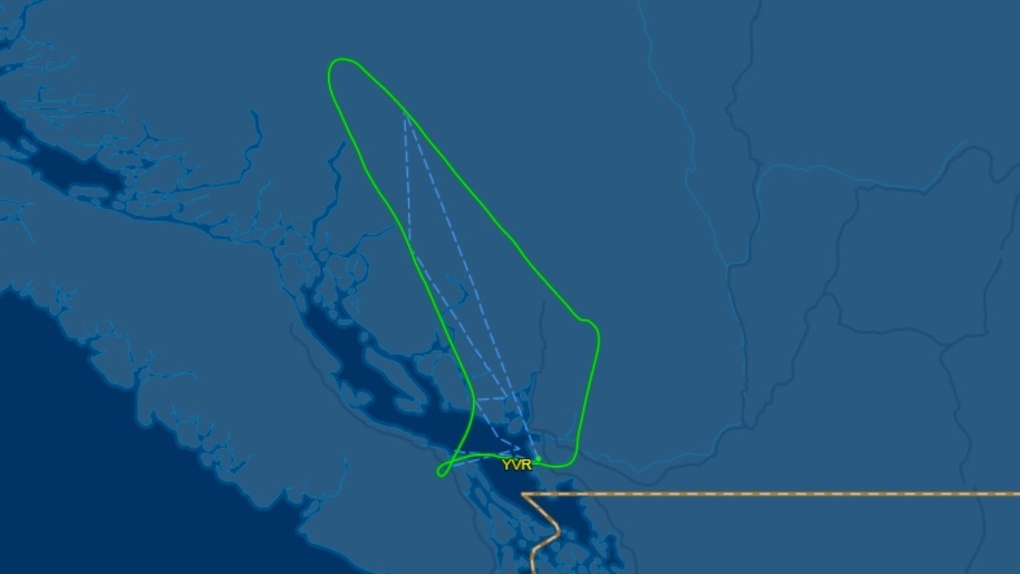 The flight path shows the plane - Air Canada flight 538 - departing YVR on time, travelling toward its destination of Anchorage, Ak., and then turning around mid-flight. (Image: FlightAware)

An Air Canada flight bound for Alaska was forced to make an emergency landing at Vancouver International Airport Sunday afternoon.

The flight path posted on the live flight tracking site FlightAware shows the plane - Air Canada flight 538 - departing YVR on time, travelling toward its destination of Anchorage, Ak., and then turning around mid-flight.

Air Canada confirmed that the flight had returned to Vancouver after an engine shutdown. There were 112 passengers on board, the airline said in a statement to CTV News.

"Aircraft are designed to fly on one engine and our pilots are trained for such situations," the airline said.

Katy Yacovitch, of Montreal, was one of the passengers on the flight. She told CTV News beverage service had just begun when a flight attendant noticed an odd smell near the 20th row. Shortly after that, the seat-back screens on the Airbus A320 went dark, Yacovitch said.

"They paused beverage service and there was no further news or announcements, but the plane had clearly turned around," she said. "The captain came on the speaker to say we were making an emergency landing in Vancouver in 10 mins due to an abnormal sensor reading."

Yacovitch said passengers experienced a lot of vibration in the middle of the plane, as though the landing gear were deploying over and over again.

After the plane landed successfully and had taxied to the gate, the pilot announced that an engine had failed in mid-air and that the plane had made it back to Vancouver on one engine.

"[The] flight crew was exceptional," Yacovitch said. "They did not get any of us worried."

She said Air Canada had distributed food vouchers to the passengers and was working to make sure everyone was comfortable as they waited for a new plane that was scheduled to board at 5 p.m. Sunday.

"Overall, if you're going to have a mid-air emergency, it was extremely well-handled," Yacovitch said.