8 arrested for mischief and obstruction at Vancouver anti-pipeline protests 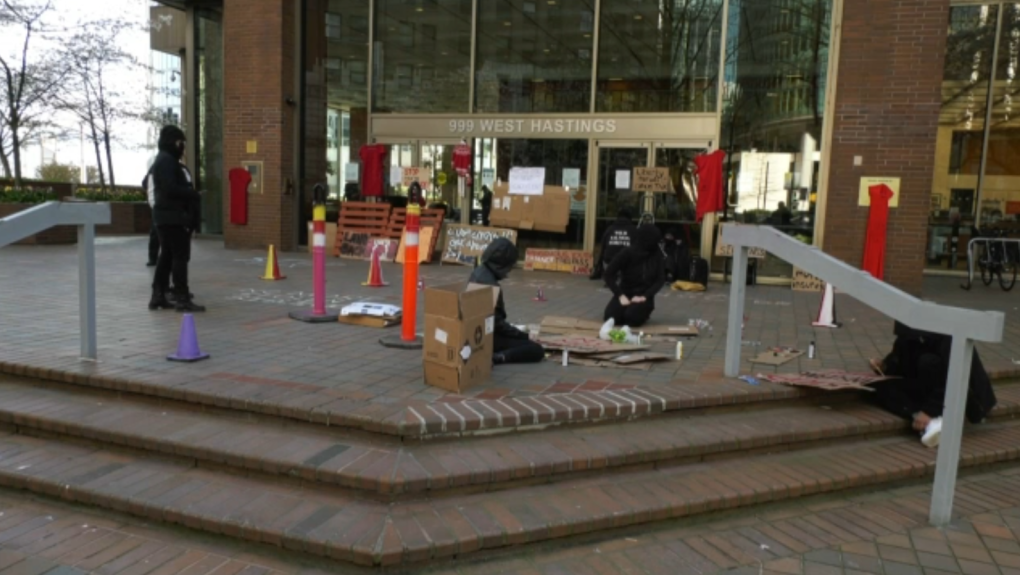 Describing themselves as “Indigenous and settler land and water protectors,” the group said in a news release that they were locking down the buildings to put pressure on the insurance companies inside them. (CTV)

VANCOUVER -- Police say they “had to” arrest eight people who were blocking the entrances to two downtown Vancouver office buildings and refusing to leave Wednesday.

“For several hours, officers and building managers asked them to leave as this was creating a serious safety hazard,” Visintin said.

Describing themselves as “Indigenous and settler land and water protectors,” the group said in a news release that they were locking down the buildings to put pressure on the insurance companies inside them.

Chubb Insurance and Liberty Mutual are both insurers of the Trans Mountain Pipeline, according to the protesters, who said the two companies, as well as other insurers of the federally owned pipeline, must stop insuring it.

“As long as insurance companies like Liberty Mutual and Chubb continue to back TMX and enable the project to continue, direct action against TMX and its insurers will escalate," said Eric Masuskapoe in the group’s news release. "We demand that Liberty Mutual and Chubb stop insuring the genocidal and ecocidal Trans Mountain Pipeline expansion project."

This is the second time protesters have been arrested for targeting the Vancouver offices of an insurance company associated with the Trans Mountain Pipeline. On Feb. 19, four people were arrested after a demonstration at AIG’s office in downtown Vancouver.

Police said protesters at that incident occupied the building and blocked off the main entrance, refusing to leave and being “aggressive” with police officers.

The protesters alleged police brutality, and video from the incident shows officers pulling one protester by their hair and dragging another along the sidewalk. The video was sent to the VPD’s professional standards section for review, and protesters have made a complaint about the incident to the United Nations Human Rights Council Committee on the Elimination of Racial Discrimination.

Police said the arrests they made at Wednesday’s protests were for mischief and obstruction. The eight people arrested are between 22 and 38 years old, and are all expected to be released from police custody pending court dates, according to the VPD.