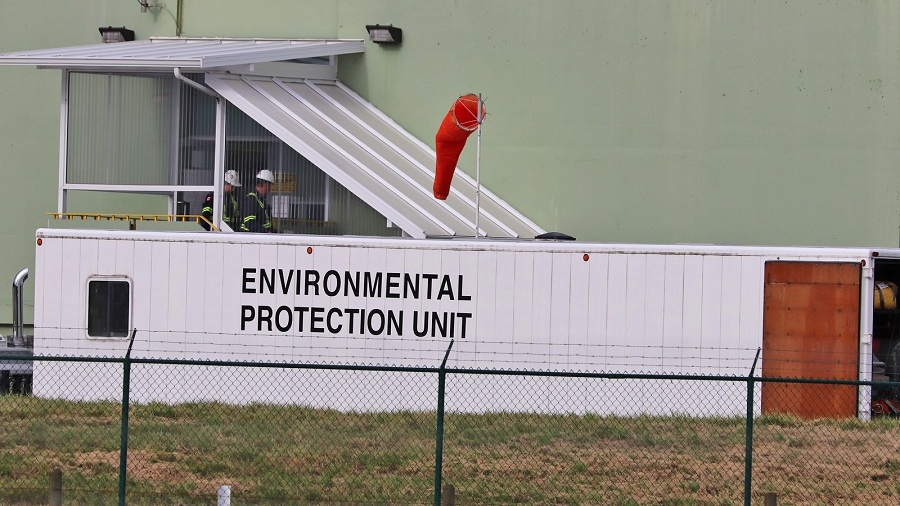 A crude oil spill from the Trans Mountain pipeline in Abbotsford, B.C., was contained and crews were brought in to clean up the site.

VANCOUVER -- Investigators have released a report on what they believe went wrong nearly a year ago, causing thousands of litres of crude oil to spill from a B.C. pumping facility.

The Transportation Safety Board released its report Tuesday into the incident in Abbotsford, B.C., in June 2020.

The Trans Mountain pipeline had to be stoppered when as much as 190,000 litres of light crude oil spilled from the Sumas pump station.

At the time, the Crown-owned company said the cause of the spill was a fitting on a 2.5-centimetre pipe.

The aging pipeline is controversial. At its current capacity, it is able to move about 300,000 barrels of petroleum crude oil and refined petroleum products a day from Alberta to B.C.'s waterfront for shipping.

The federal government has approved an expansion of the pipeline that will triple its capacity.

Those opposed to the project have cited reasons including the risk of spills like the one in Abbotsford last year.

In its report, the TSB wrote that the crude oil was released from an above-ground section of tubing within the pump station.

The site in Abbotsford is monitored 24 hours a day by Trans Mountain's Control Centre Operations in Edmonton, the TSB wrote. At the time of the spill, there were no employees at the site.

An alarm went off in Edmonton shortly before 11 p.m. on June 12, the report says. One minute later, an on-call technician was contacted.

Combustible gas was detected in the pump building at 10:56 p.m., which triggered an automatic shutdown of the pump station.

Additional personnel were asked to head to the site a short time later, and a controlled shutdown of the Trans Mountain pipeline began at 11:03, the report says. It took 25 minutes to fully shut down the mainline.

The field technician confirmed oil had been released at 11:38 p.m., and the source of the leak was found at 3:32 a.m.

The TSB confirmed the cause cited by Trans Mountain. A compression fitting had separated from a section of tubing.

According to the board's report, the tube had "pulled free" from the fitting in a way that suggested "insufficient tightening of the compression fitting at the failure location." Ultimately, an analysis conducted by a laboratory found the fitting failed because of improper tightening during its installation, which was in 2015.

It was reported that Trans Mountain used the manufacturer's instructions, but did not conduct an inspection of the individual fittings.

However, the company did do a pressure test, and no leaks were seen.

The leaked oil flowed into the pump station's drainage system, through an oil-water separator and into a culvert.

Seven cubic metres of the released oil migrated into an agricultural field as a result, the TSB wrote.

The oil-water separator does not have an automated isolation system or manual isolation valves, the TSB wrote, so when oil began to flow into the field, there was no way to stop it until the source of the leak was found.

Since the incident, Trans Mountain has added such a valve, among other safety actions that include upgrades to the Sumas pump station's containment and drainage features. A full list is included in the TSB report.