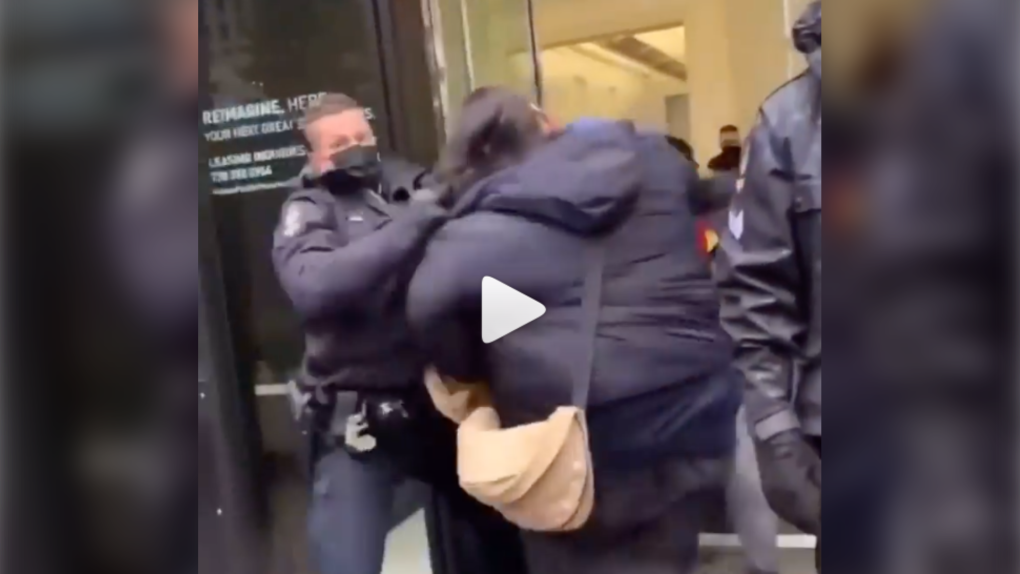 A still image of a video circulating on social media, which appears to have been taken at the Feb. 19 anti-pipeline protest, shows a Vancouver police officer pulling a protester forcefully by the hair (Instagram).

VANCOUVER -- A group of Indigenous anti-pipeline demonstrators say they're filing complaints to a United Nations committee over allegations of police brutality.

The complaint will be made to the UN's Human Rights Council Committee on the Elimination of Racial Discrimination, the Union of B.C. Indian Chiefs said.

It stems from a rally in Vancouver on Feb. 19, when dozens demonstrated outside the offices of Trans Mountain pipeline insurer AIG.

Video from the rally shows officers dragging one of the protesters along the sidewalk.

Another woman says her cousin was the victim of police actions, and says the group was seated and burning medicines when police interrupted.

The Vancouver Police Department said the actions of officers involved will be reviewed by a professional standards committee.

Other video showed members of the VPD aggressively handling and pushing protesters to the ground. In one instance, it appears an officer pulled a person by their hair.

"The appropriate review of the officer’s actions will occur, however it’s important to remember that the 30-second clip fails to show what happened leading up to that interaction and what happened after. The clip does not provide complete context," said Const. Tania Visintin in an email last month.

In a statement about the UN complaint, the group of Indigenous youth involved in the protest also criticized Trans Mountain's recent move toward trying to keep its insurers confidential.

"Trans Mountain thinks that by attempting to get confidentiality… they will assist these companies in hiding from accountability for destruction of Indigenous peoples lands and waters," the Braided Warriors wrote.

"What Trans Mountain and these insurance agencies fail to understand is that until the insurance agencies release formal documentation that they have withdrawn from the project, we will continue to target their companies, hold them accountable, and demand they stop insuring genocide."