43 overdoses in a single night in Vancouver: firefighters 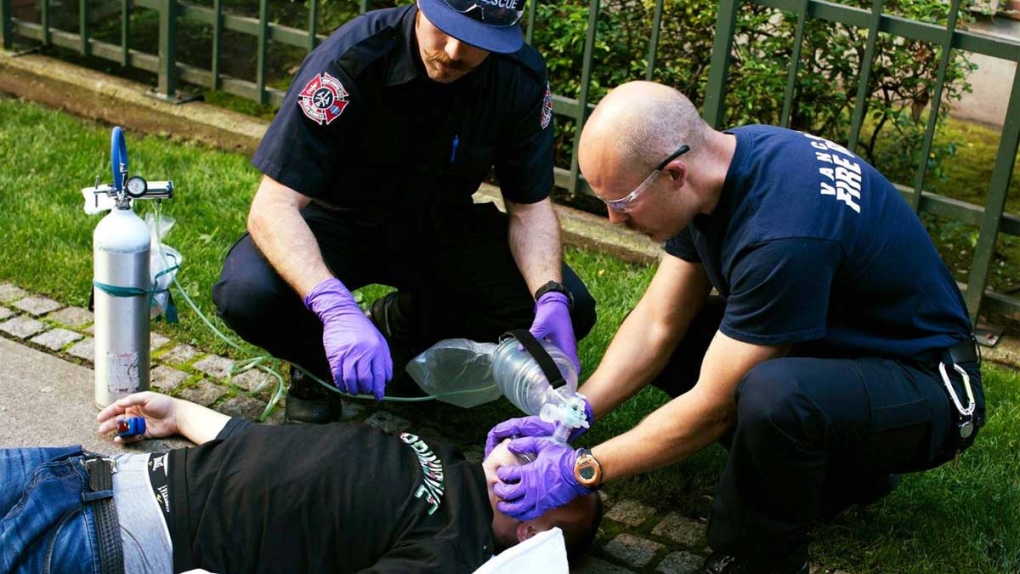 A union representing local firefighters posted this photo on Twitter, writing, 'This weekend crews working in the (Downtown Eastside) were faced with a staggering 75 incidents in 24 hrs.' (@IAFF18)

A local official posted a startling statistic on Monday about the overdose crisis in Vancouver.

There were 43 overdoses in a single night in the city, Deputy Fire Chief Tyler Moore said. The overdose calls all came in overnight Friday, he said.

Moore posted the number in response to a message posted on Twitter by the Vancouver firefighters union saying weekend crews received 75 calls over a 24-hour period in the city's Downtown Eastside.

"Sadly many of those were drug overdose calls," the tweet from the union read.

"Incredible work of all first responders including (BC Emergency Health Services) and volunteers at the #OverdosePrevention Society."

The latest data from the BC Coroners Service suggests an average of three people die from illicit drug overdoses each day in the province.

Ninety people died in the month of January. However, while the number is still high, it represents the fewest deaths per month since 2016.

Fentanyl and other highly potent opioids like carfentanil were found in 87 per cent of cases last year, when 1,310 people died of overdose.

The Friday night numbers come at the same time as paramedics are speaking out about a shortage in staffing.

The same night, 17 ambulances were out of service in the Lower Mainland, a union representative told CTV News over the weekend, because there weren't enough people to staff them.

Cameron Eby, president of Ambulance Paramedics and Emergency Dispatchers of B.C., said low staffing is taking a toll on employees. Paramedics and dispatchers are feeling fatigued and burnt out, and some are experiencing occupational stress injuries such as post-traumatic stress disorder.

Eby said there are vacancies in several cities across the region, and until those jobs are filled, people requiring an ambulance may have to wait longer.

BC Emergency Health Services said it is working to fill shifts, and is aware that paramedics are responding to more calls than ever as a result of the aging population and overdose crisis.

There were 43 overdoses in @CityofVancouver last Friday. @IAFF18 @VanFireRescue were very busy this weekend. #vfrs https://t.co/kXtMUbNrB2