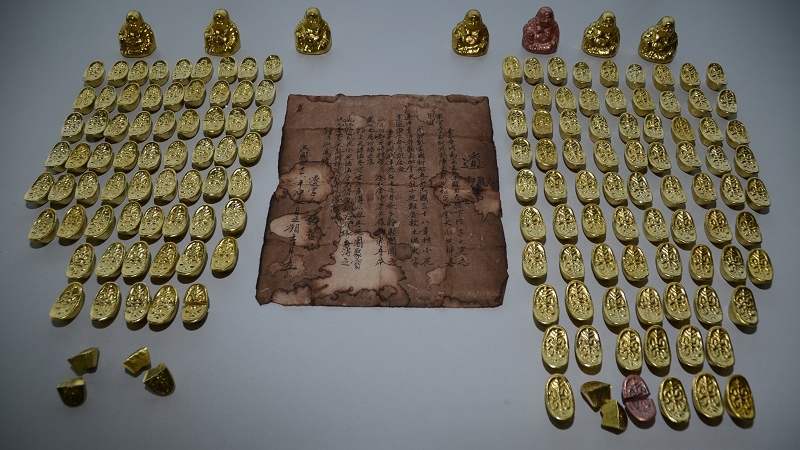 Gold artifacts that police allege are fake are seen in this image released by Richmond RCMP.

VANCOUVER - An investigation that stretched from British Columbia to San Francisco has led to charges against two Chinese nationals, accused in a scheme to sell what RCMP allege are phoney gold artifacts.

Mounties in Richmond, B.C., say they were contacted by a man who claimed he purchased what he was told were priceless Chinese artifacts, but soon discovered the gold figures and ingots were fake.

The complaint was received late last month and members of Richmond's Economic Crime Unit were able to link it to a similar complaint in neighbouring Surrey.

Cpl. Marco Sallinen says two suspects were identified and, with help from Canada Border Services Agency and the San Francisco District Attorney's Office, arrests were made on Jan. 6.

Fifty-two-old Dejin Xu and 49-year-old Zhong Yang, both from China, are each charged with two counts of fraud over $5,000, and remain in custody.

Mounties say it is best to be cautious when approached by someone selling items of great value and they recommend purchasers have all gold pieces individually tested by an independent lab and use a lawyer to protect both the buyer and the seller.