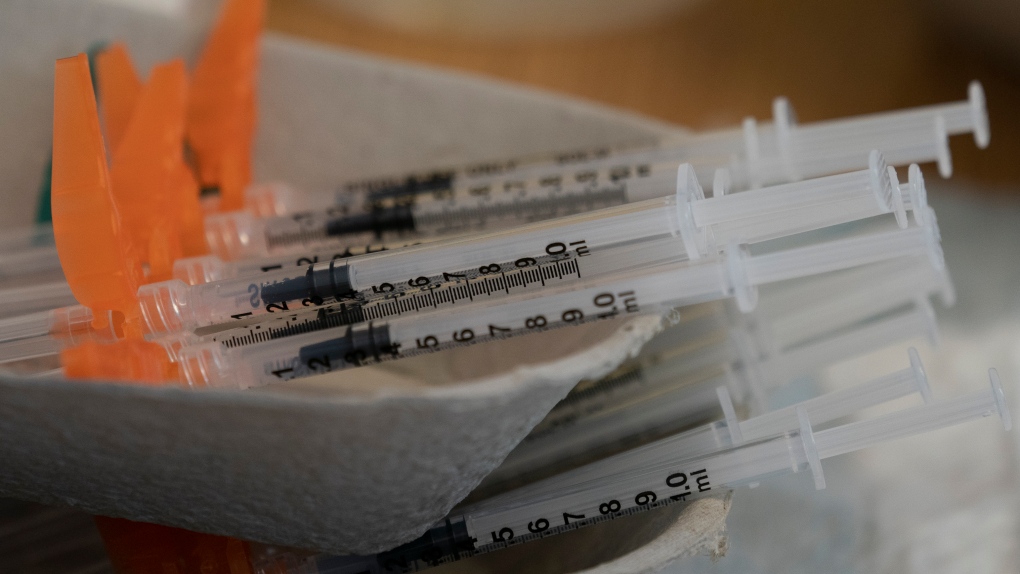 Needles are seen filled with the vaccination for COVID-19 at a truck stop along highway 91 North in Delta, B.C., Wednesday, June 16, 2021. THE CANADIAN PRESS/Jonathan Hayward
VANCOUVER -

In a period of three days, 16 deaths in British Columbia have been attributed to COVID-19, the health ministry said in an update Monday.

The update included that another 1,270 cases of the disease were confirmed within the same period. This brings the total number of cases of the novel coronavirus confirmed in B.C. to 213,020.

The latest update brings the rolling seven-day average for daily cases down to 474, from 498 on Friday.

It's the lowest average the province has seen since Aug. 13, when the average dipped to 463.

Of the 376 infectious COVID-19 patients in hospital, 116 are being treated in intensive care units.

The ministry said 206,665 people have recovered since the start of the pandemic; 2,273 have died.

Of the latest deaths, eight people were in the Island Health region. The remaining half of deaths were spread over the other four health authorities: one in Fraser Health, two in Vancouver Coastal, two in Interior Health and three in Northern Health.

No new health-care outbreaks were reported, leaving the total number of facilities with ongoing outbreaks at 23.

For more on the update, including how many people are now vaccinated against COVID-19, and how many of the most recent cases were in people who've received both shots, just one, or none, see the health ministry's news release.