WorkSafeBC report says fatal mill explosion could have been prevented 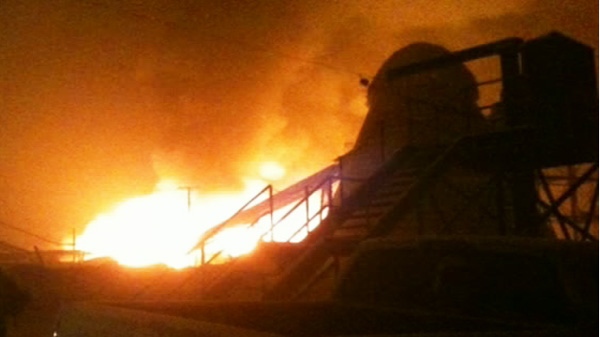 An explosion at a sawmill in Burns Lake, B.C. in Jan. 2012 left at least 29 people injured and two workers dead.

VANCOUVER -- The sister of a man killed in an explosion at a northern British Columbia sawmill wants to know how the tragedy could ever have occurred, after the province's worker safety agency released an investigative report that found the fatal fire was preventable.

WorkSafeBC released its report publicly Thursday into the blast at Babine Forest Products mill, after the Crown announced last week it would not pursue charges, in part due to a flawed investigation.

The report was cold comfort for Lucy Campbell, whose brother Carl Charlie, 42, and his co-worker Robert Luggi, 45, were killed when the explosion ignited a fireball through the mill.

"The report says this was a preventable incident so that really upsets us, because if this was preventable why wasn't it prevented? Why didn't the actions take place? Why wasn't the mill secure for my brother and the other workers to be in there?" Campbell asked.

The agency's investigation left significant evidence inadmissible in court, the Crown said, citing specifically that investigators failed to obtain search warrants or warn witnesses of their charter rights before taking statements. A number of charges recommended by WorkSafe were not considered by the Crown because of the inadmissibility of evidence.

Based on the remaining evidence, the agency still recommended four charges for violations of the Workers Compensation Act and Occupational Health and Safety Act, but the Crown felt the company had a defence of due diligence, and there was no likelihood of conviction.

Jeff Dolan, the director of investigations for WorkSafeBC, said the investigative techniques used by the agency have been in place for many years and have led to successful prosecutions. However, the agency is now working with the Crown to make changes to ensure evidence in future is not compromised, Dolan said.

Although there will not be charges, the agency is weighing appropriate orders and penalties against the company.

"Our work on this is not complete," Dolan said.

The January 2012 explosion that killed Luggi and Charlie injured 20 other workers.

The investigation did not definitively determine the cause of the fire but the report offers a glimpse into the terrifying moments after the explosion in the basement.

The electrician recounted being thrown from the second floor to the courtyard below and the basement attendant watched the fireball race toward him. The watchman heard a fire alarm before the explosion and had entered the basement to find the source when the wall of flame hit him.

The saw-filer felt the floor beneath him lift before he, too, was engulfed in flames, and the yardman saw the roof of the sawmill blow off as the fireball erupted into the sky.

The basement attendant was knocked out in the blast and awoke to find his clothes on fire. He escape but suffered serious burns.

Investigators found the company knew it had an inadequate dust collection system, even after a similar explosion and fire almost a year earlier.

The February 2011 fire was also blamed on accumulated dust, another in early December and several smaller blazes leading up to the explosion. The company was cited for an occupational health and safety violation in December 2011 for failing to adequately reduce or control airborne wood dust.

The report set out a lengthy involvement of WorkSafeBC with the Babine mill.

"Prior to the incident, WorkSafeBC did not enforce the combustible dust provisions of the Occupational Health and Safety Regulation at the Babine sawmill," the report said, pointing out the violation order that was issued for excessive levels of airborne dust.

"As the employer, Babine was ultimately responsible to ensure that its operations complied with occupational health and safety legislation."

The company should have taken action to control wood dust, it said.

The company made a down payment on system improvements but the additional equipment required an electrical upgrade. Preliminary work had begun but rather than reduce production while it was done, the mill actually increased production.

The mill had an ineffective inspection and maintenance system and inadequate supervision, the investigators found.

Jim Sinclair, president of the B.C. Federation of Labour, said the controversy has shaken confidence in the provincial agency.

It prompted Premier Christy Clark to appoint deputy minister John Dyble to look into the case.

"When I have the facts, I'll be in a position to make a decision on what happens next," she said following a speech in Vancouver.

Clark said for justice to be done, it must be seen to be done. While she was "reticent" to set a timeline for the probe, Clark said it is an urgent review.

"If there are lessons to be learned, I intend to make sure that we learn them because the people of Burns Lake have been through a lot," Clark said.

A few months after the Babine explosion, an explosion at a mill in Prince George killed Alan Little, 43, and Glenn Roche, 46.

The two incidents raised the alarm about beetle-kill timber and led to an inspection campaign in B.C. mills.

The Babine Forest Products mill has been rebuilt and is expected to return to full capacity production next month.