Worker in cattle cruelty case given jail time, but able to work at other farm 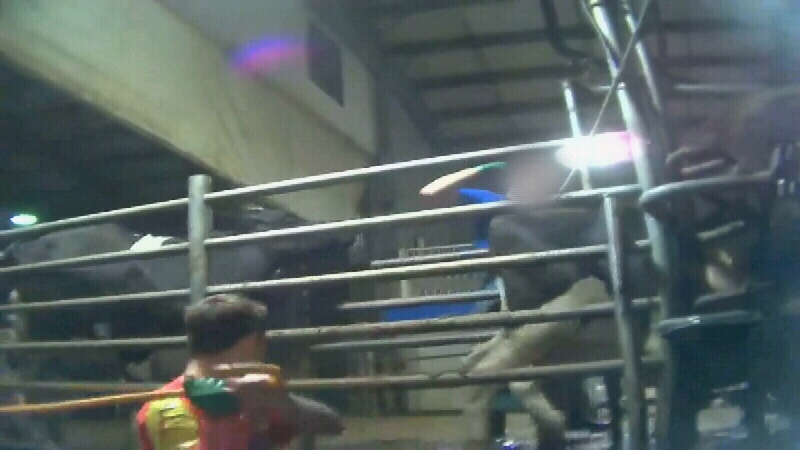 A man who pleaded guilty to animal cruelty charges stemming from an undercover investigation Chilliwack, B.C. is now working at another dairy in the Lower Mainland.

Brad Genereux was one of several Chilliwack Cattle Sales workers charged after video shot by activist group Mercy for Animals showing cows being abused was released to the public.

The footage captured in 2014 appeared to show workers punching and kicking cows, hitting them with canes and ripping hair from their tails. One cow was lifted by a chain around her neck using a tractor, and some of the bulls had milking equipment attached to their testicles.

Some clips show bystanders cheering in the background without intervening or making an effort to stop the abuse.

Genereux pleaded guilty in June to two counts of animal cruelty, and was sentenced Wednesday to 45 days in jail. He's the sixth employee to receive a jail sentence, and the seventh to plead guilty.

As part of his sentence, the worker is also prohibited from having custody or care of large animals for 18 months, a representative of Mercy for Animals said. However, the court decided to make an exception to his probation terms.

He will be permitted to work at Cedarwal Farms in Abbotsford, a 350-acre dairy home to 400 cows.

Mercy for Animals said Genereux was among the people seen on camera beating the cows, and that his employment at another farm "belittles today's convictions for egregious and malicious animal cruelty."

CTV News called Cedarwal Farms, and was told by the person who answered the phone that they were unable to comment.

The Chilliwack Cattle Sales case marks the first time in Canadian history that factory farm workers have been jailed for animal abuse exposed by undercover investigation conducted by an animal protection organization.