“It’s not uncommon to be in an office tower in Vancouver and find yourself surrounded by people who are delivering food,” said Sylvain Charlebois, scientific director of the Agri-Food Analytics Lab at Dalhousie.

Apps like Foodora, DoorDash and UberEats are becoming the go-to choice for take-out delivery service but according to the survey, they have some improvements to make.

The survey found the biggest turn-offs for food app users were high prices, complaints about food temperature and too much packaging being used.

Twenty-eight per cent of those surveyed didn’t like food apps at all because their favorite restaurant didn’t use the service.

Others complained they didn’t get as much food via the app as they did in the restaurant, and there were also complaints about delivery people and menu options. 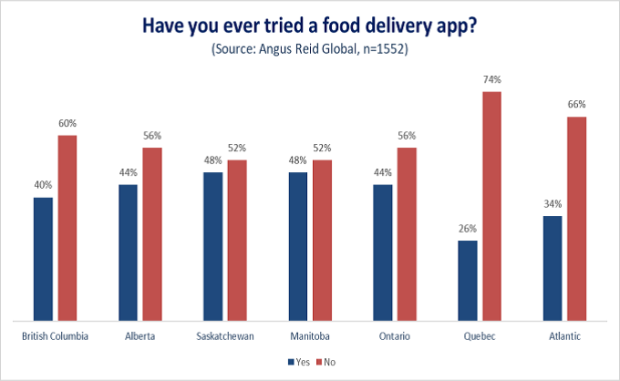 Despite the complaints, the survey also found that many people are turning to these apps. Five years ago they did about $100 million in business in Canada, but that has grown substantially.

“The market is actually exploding,” said Charlesbois. “We estimate over $1.5 billion, and it’s growing fast.”

The majority of those using the apps are under 34 years old – 67 per cent. But according to the survey, 39 per cent of Canadians have tried a food delivery app at least once. Some regular users use them at least once week.

Charlebois expects that as food app popularity grows, a lot more “ghost kitchens” will show up too.

Those are kitchens without a restaurant operation or store front - basically a bunch of cooks in a building, in a low-rent area in the suburbs, making various types of food and advertising it for sale on apps only.

Meal kits, which Charlebois says are the healthier choice, are not as popular. Those are the boxes delivered to your home with fresh ingredients, along with recipes to prepare the food yourself.

“Only four per cent of Canadians do order them on a regular basis,” said Charlebois.

Part of the problem is the price - it costs about $10 per meal.  He says the industry is currently subsidizing that cost to try to change habits and get people to use meal kits on a regular basis. Once people are hooked, the price could go up.

But the bottom line – whether ordering a meal kit or a food delivery app, there is a price for convenience.

“If you use food delivery apps, you won’t get a bargain. You will pay more,” Charlebois said.