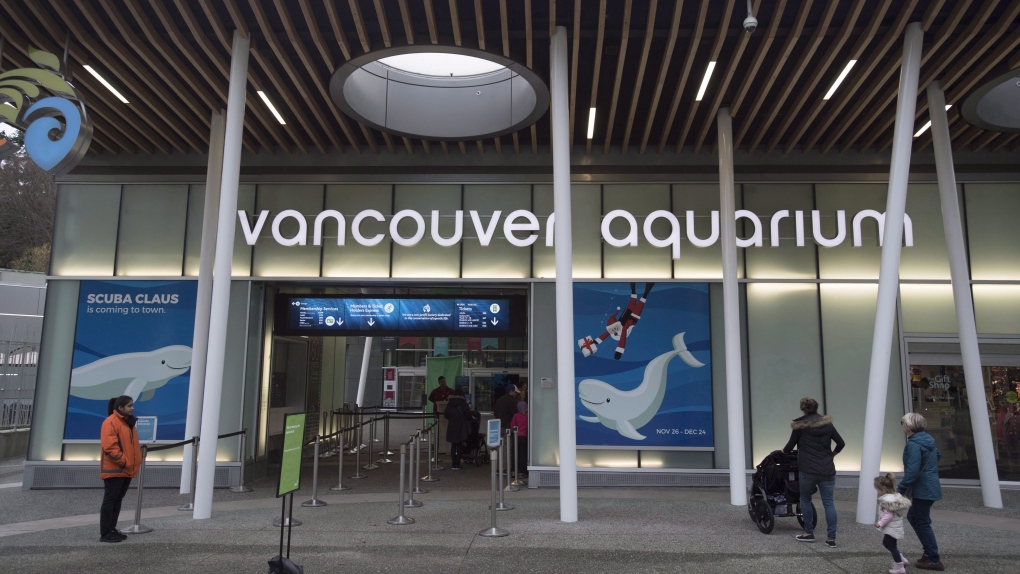 The outside of the Vancouver Aquarium is pictured in Vancouver, B.C. Friday, Nov. 18, 2016. THE CANADIAN PRESS/Jonathan Hayward

VANCOUVER -- Lillooet stepped out of her travelling cage, stretched her wings, shook her tail feathers and looked around the empty foyer of the Vancouver Aquarium.

The 22-year-old African penguin recently took a stroll outside her enclosure without having to dodge the crowds of people who would normally be watching the shimmering jellyfish or schools of fish in the glass cases that surrounded her.

The aquarium closed its doors on Sept. 7 as it sorts through the financial devastation of COVID-19 on one of the city's most popular tourist destinations.

Lasse Gustavsson, president and CEO of the aquarium's operator Ocean Wise, said they need to find a way to function that is profitable and safe during the pandemic.

“So, right now we're looking at how can we run the pandemic safe operation? How can we attract visitors in the numbers that carry the costs of the operation?” he said in an interview.

Ocean Wise was launched in 2017 as a non-profit organization that focuses on global ocean conservation and it signed a new licence agreement last year that allows the aquarium to operate in Stanley Park for the next 35 years.

The Metro Vancouver Convention and Visitors Bureau says the aquarium is the country's largest and attracts more than one million visitors a year.

The aquarium needs about $1 million a month to cover its costs. With no money coming in from ticket sales, the aquarium is dependent on donations from the public, funding from the federal and provincial governments and dipping into the organization's savings, said Gustavsson.

Although it closed its gates, he said the Ocean Wise Conservation Association's other initiatives will continue including the Great Canadian Shoreline Cleanup, its research programs and marine mammal rescue service.

The aquarium, which is home to about 70,000 animals, closed when the pandemic was first declared and when it reopened in June with visitor restrictions, ticket sales were down by almost 80 per cent, causing it to continue operating in the red.

Its board of directors is now trying to find a way of remaining financially viable and accelerating its conservation mission, but Gustavsson said he doesn't know what that will look like.

“I don't think anybody knows that,” he added.

Several aquariums and zoos across North America are looking at how to run their operations during the pandemic, he said.

“My guesstimate, and it's not really underpinned with serious data, is a lot of aquariums in North America would go under this year or next unless we find a very fast solution to the pandemic.”

Gustavsson said he doesn't know when the Vancouver Aquarium will be open to the public again.

“I don't think it's realistic to expect any visitors in the aquarium before maybe June next year at the very earliest,” he said.

“We will open again, one day, somehow.”

The aquarium has laid off 209 full-time, part-time and casual positions, leaving it with 75 staff to take care of the animals.

It is home to a number of animals that have been rescued and are now cared for by its keepers including a California sea lion blinded by gunshot and a two-month-old otter named Joey that was found on Vancouver Island next to a dead adult presumed to be his mother.

Cherry Brook Zoo in Saint John, N.B., had to close its doors permanently earlier this year because of financial hardships that were compounded by COVID-19.

Facette said there will be a place for zoos and aquariums after the pandemic because of the healing power of animals, including the Vancouver Aquarium.

“I'm confident that they'll be back sometime in the new year. When? I don't know,” he said.

“Is there a possibility of things going sideways? That possibility exists for anybody, so I can't give you a 100 per cent guarantee but I'm very, very confident in senior management.”

This report by The Canadian Press was first published on Sept. 17, 2020.