'We left on our terms': Daniel, Henrik Sedin have no regrets over retirement decision 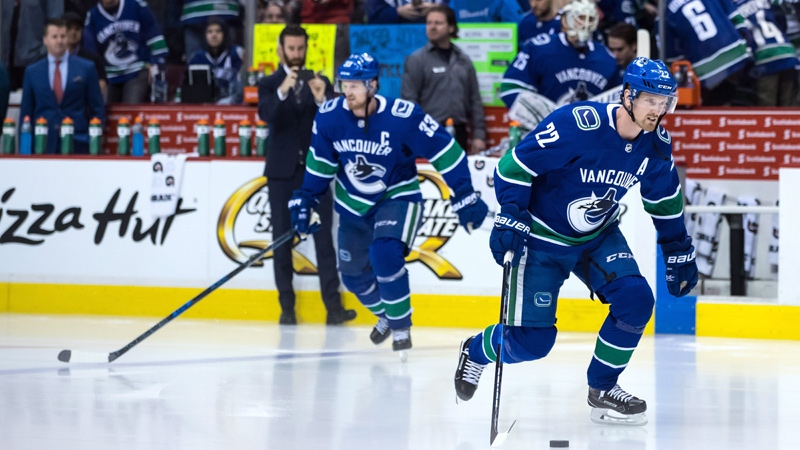 Vancouver Canucks' Henrik Sedin, left, and his twin brother Daniel Sedin, both of Sweden, skate during the pregame before playing in their last home NHL hockey game against the Arizona Coyotes, in Vancouver on Thursday April 5, 2018. THE CANADIAN PRESS/Darryl Dyck

VANCOUVER -- There are many things Daniel and Henrik Sedin miss about playing hockey, but the Swedish twins who will be remembered as two of the best players in Vancouver Canuck history have no regrets over their decision to retire from the NHL.

“It's been great,” Daniel said Monday, as the Canucks kicked off a week of celebrations surrounding the retirement of the brothers' numbers. “We left on our terms. We knew it was time.

“You still miss, like any other job, the camaraderie, you miss our teammates, the training staff, coaches you've had. You also realize what it takes to be at your best game in and game out. That takes a lot of hard work. When you can't put the work down anymore, I think it's time to leave.”

Henrik, the former Canuck captain, said the transition away from the game has been easy for the brothers who continue to live in Vancouver with their families.

“You hear a lot of stories about guys who walk away, depression, things that don't go as planned,” he said. “For us it hasn't been that way. It says a lot about our families and also about where we were when we finished. We were mentally prepared.”

Henrik's No. 33 and Daniel's No. 22 will be raised to the rafters at Rogers Arena Wednesday night when the Canucks play the Chicago Blackhawks. Past Canuck captains Trevor Linden, Markus Naslund and Stan Smyl will attend the ceremony.

Monday night, when the Canucks played the Nashville Predators, Linden, Naslund and Smyl were honored in a Legions Night.

The Sedins' community work and contributions to the city and province will be recognized in a ceremony prior to Sunday afternoon's game against the Anaheim Ducks.

Henrik gave a typical Sedin response when asked about a whole week of celebration in their honour.

“I don't know if it makes sense,” he said with a smile. “You could have done it in one day, but it's nice.

“We're going to try to enjoy it as much as possible. I'm sure there are going to be emotions, a few nerves.”

Drafted second and third overall in 1999, the Sedins played 17 years in Vancouver before retiring in at the end of the 2018 season. They became the face of the Canucks franchise, gifted players on the ice who also left their mark in the community.

In 2010 the brothers donated $1.5 million to help build a new BC Children's Hospital. They also established The Sedin Family Foundation which works to improve healthy, education and family wellness in B.C.

In retirement Daniel is a crossing guard as his son's school.

Henrik, known primarily as a setup man who would rather pass than shoot, won the Art Ross Trophy as the league's top scorer in 2009-10, with 112 points. He also won the Hart Trophy as league MVP.

Daniel, the triggerman, won the Art Ross in 2010-11 with 104 points. He won the Ted Lindsay Award as the league MVP voted on by the players.

Current Canuck captain Bo Horvat said the Sedins were important for his development as a player.

“They are world-class people,” said Horvat. “They came to the rink every single day to work. They are leaders on and off the ice, in the community, around the rink. For a young guy seeing that, what they did for this organization, do half of what they did and I'd be happy.”

The Sedins were part of the Canuck team that lost Game 7 of the Stanley Cup final to the Boston Bruins. Over the final seven years of their career, Vancouver didn't win another playoff series and missed the playoffs four times.

This year the Canucks head into the stretch run of the season as legitimate playoff contenders.

Henrik believes the twins' retirement might have helped Vancouver's progression.

“They have a lot of young stars,” he said. “I think they have been able to take this step. I think it might have taken longer if we had stayed.

The competitive spirits still burns between the brothers. They have taken up running, often six times a week, logging around 100 kilometres.

On Sunday they participated in a local half marathon.

“We don't take it that serious,” said Daniel. “I beat him by one second, but it's not a big deal.”

That brought a response from Henrik.

“He did not,” said the older brother by six minutes. “He was very smart. He started a second behind me. His chip count was a second less (but) we crossed the finish line at the same time.”

This report by The Canadian Press was first published Feb. 10, 2020.