Virtual kidnapping warning renewed after another incident in Vancouver

VANCOUVER – Police are renewing a warning about so-called "virtual kidnappings" after yet another incident was reported in Vancouver.

In a statement Thursday, the Vancouver Police Department said a 27-year-old man was targeted the night before.

"Foreign fraudsters" tried to extort the man out of thousands of dollars, the VPD said.

They didn't provide specific details on what happened, but called the attempt "elaborate." It was ultimately unsuccessful, as police were alerted to the incident and are now investigating.

"The scam has all the hallmarks of similar virtual kidnappings that happened last year," the VPD said.

Virtual kidnapping is a term that made local headlines last spring. Typically, the victim is called by scammers and are told a story involving police.

In some cases, they're told there's a warrant out for their arrest in China, while in others, they've been told Chinese police need their help investigating something.

"The suspects then tell the victim to go into hiding and to make fake videos claiming they've been kidnapped," Sgt. Aaron Roed explained in the VPD statement.

"The scammers send the videos to the victim's family and friends asking for money to pay for their release."

Typically, the victims are women in their early 20s. Often, they're from Mainland China, and are in Canada on a student visa.

Police believe there may have been more instances than they've been aware of, as they suspect several have gone unreported.

They issued a simple reminder for those targeted by scammers: "Police from outside Canada will never arrest you in this country, (or) ask for photos or videos of yourself pretending to be a victim of crime."

Anyone who receives a call from someone claiming to be part of a foreign police agency is asked to call 911 immediately.

Police also ask anyone with more information on virtual kidnappings to contact them at 604-717-3679. Tips can also be left anonymously through Crime Stoppers. 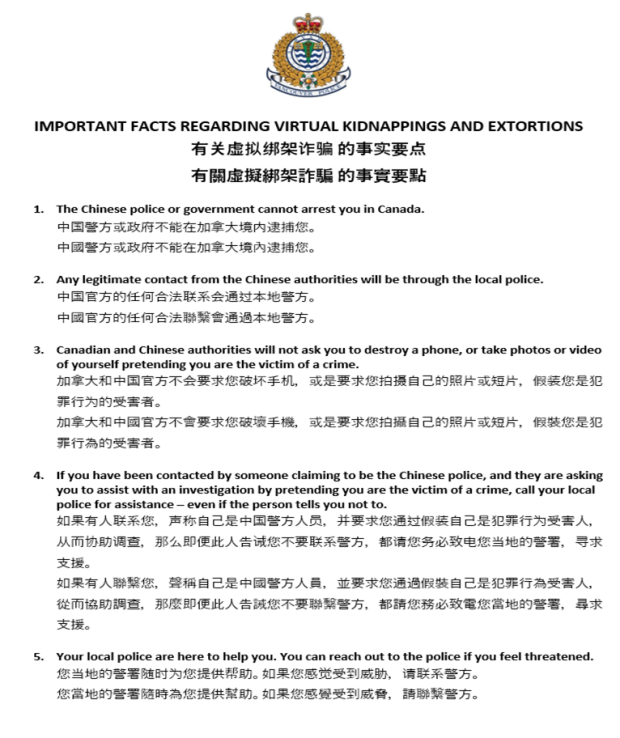