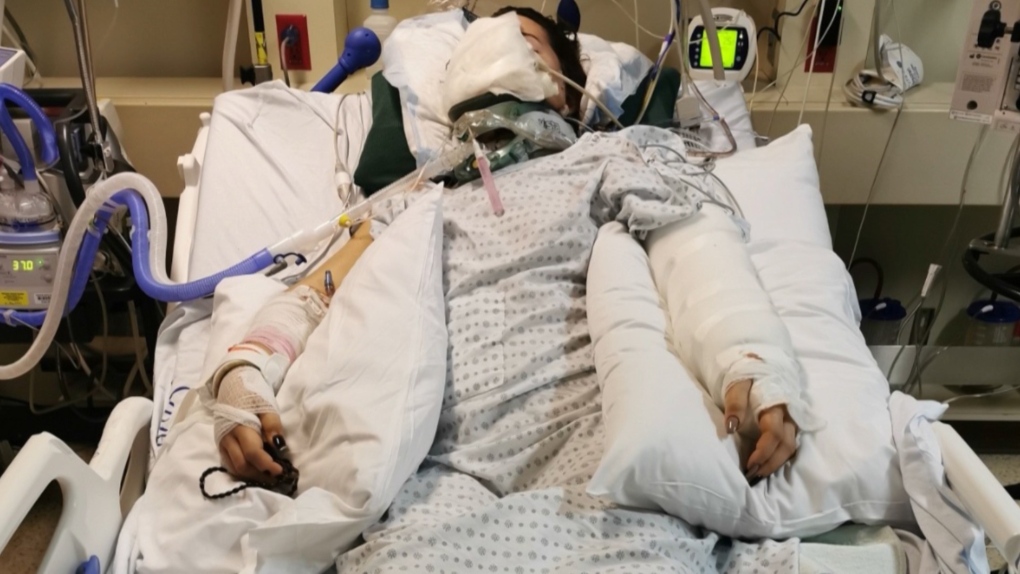 Desiree Evancio is already recovering from her third life-saving surgery in Vancouver General Hospital as seen in this photo provided by the GoFundMe page set up for her.

VANCOUVER - CTV News has learned Vancouver police have obtained surveillance video showing a Burnaby woman in the moments leading up to a horrific incident that saw her dragged under a vehicle for several blocks, crushing her face and breaking bones in the process.

Twenty-four-year-old Desiree Evancio was crossing the street at East Hastings and Jackson Avenue early in the morning on Saturday, Oct. 12 when she was somehow caught up between a van with Illinois plates; police said at the time the driver didn’t realize she was there until he came to a stop blocks away.

“There’s no conclusions being made at this time,” said Sgt. Aaron Roed. “We can confirm there is evidence which indicates the victim walked between the van and the cargo trailer as it was stopped in traffic.”

Witnesses who’d been outside the SBC Restaurant on East Hastings that night told CTV News they were startled to see a body underneath a commercial van with a trailer that pulled up to the venue soon after a live show had finished; they say the victim was at the rear of the van near the trailer.

American punk-rock band Off With Their Heads suspended their North American tour in connection with the investigation due to “an accident a band member was involved in,” according to a Facebook post. The band’s frontman, Ryan Young, wouldn’t confirm which band member, citing the ongoing investigation, but told CTV News: “All I can say is that I am heartbroken for (the victim).”

Vancouver police have not named the person who was driving during the accident, only confirming that he is an American and that they're looking to see what role alcohol may have played.

Evancio has been hospitalized with life-threatening injuries, undergoing several surgeries to reconstruct her face and will need a prosthetic eye at a later date. A GoFundMe page updated by her sister adds, “The surgical team was able to use muscle and tissue from her stomach to cover the area of her brain that was exposed and seal it off.”

Her sister, Ashley Danh, told CTV News they expect Evancio to be hospitalized for 6 months to a year, but that her recovery is expected to take much longer.

Vancouver police won’t speak to any potential charges in this case, and have insisted throughout the investigation that serious motor vehicle incidents require detailed investigative work that’ll take place over the course of weeks or months.