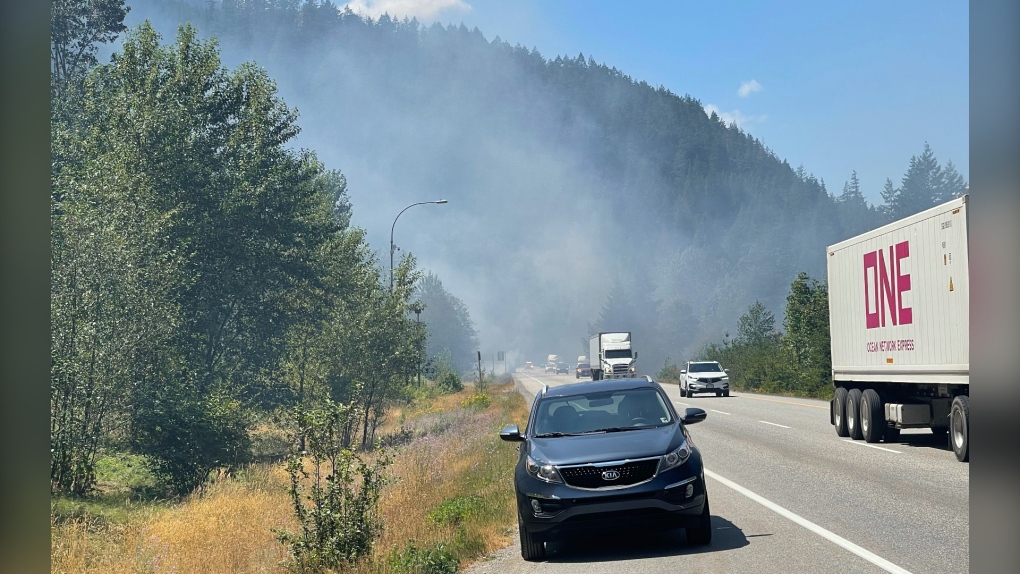 A northbound section of Highway 5 was closed at around 1:30 p.m. at the split with Highway 3 due to the fire, the RCMP's B.C. Highway Patrol said in an advisory. Southbound and westbound traffic was unaffected.

By 4 p.m., authorities had reopened a single lane of traffic to pass around the scene as crews cleared the area. By about 4:30 p.m., the highway was reopened in both directions.

According to officials, the vehicle on fire was parked on the Coquihalla Highway near the Othello pullout.

"The fire is in BC Forestry’s jurisdiction. Conditions are very dry and the BC Wildfire Service is deploying a helicopter with water bucket to the scene," BCHP said.

Fortunately, no one was injured in the fire. The RCMP said firefighters would remain at the scene for a time in case of any flare-ups.

A man who said he'd driven the occupants of the truck to Kamloops after meeting with the RCMP said the people involved lost everything in the fire.

Sean Cote told CTV News they'd told him they were moving their daughter, who had recently been in a serious car crash, then were heading camping.

He said they told him they'd just bought the truck, and had it fully serviced.

Cote said it sounded like it may have been a fuel leak. They told him the truck went up in flames quickly, and they barely got out without being harmed.

The federal government announced Thursday that Canada will receive 2.9 million doses of Pfizer’s pediatric COVID-19 vaccine shortly after its approval by Health Canada for the five to 11 age group.

The Vancouver Police Board is to hear a report Thursday recommending the force change its handcuffing policy after the arrest of an Indigenous man and his 12-year-old granddaughter at a bank in 2019.

Ontario is no longer providing the federal government with COVID-19 flight exposure data, citing an increase in public health measures and vaccinations.