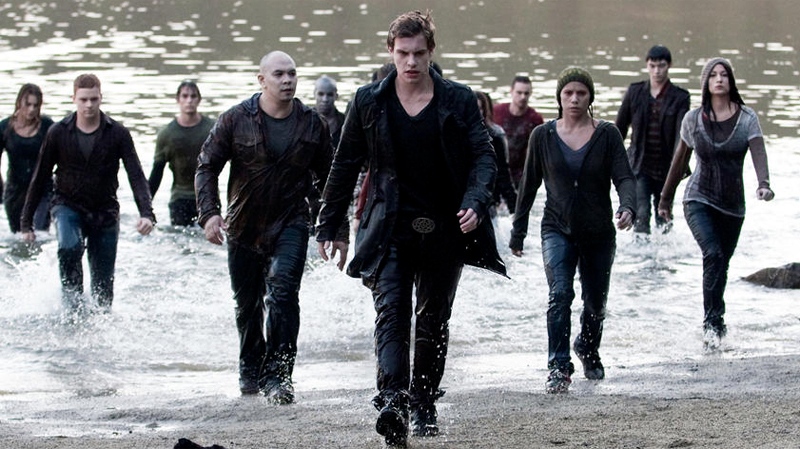 Xavier Samuel as Riley and the rest of VIctoria's army in Summit Entertainment's 'The Twilight Saga: Eclipse'

One of the newest members of the "Twilight" universe says he's learned the hard way not to approach raccoons in Vancouver's Stanley Park.

Aussie actor Xavier Samuel says he was bitten by one last summer while in town to shoot the third instalment of the movie series.

The 26-year-old says the mishap occurred as he and Bryce Dallas Howard, who plays the villainous Victoria, took a stroll through the city park.

He says raccoons are not common in Australia, and that he asked Bryce to take a picture of him next to the wild creature. It ended up biting his finger.

Samuel plays the newborn vampire Riley in "The Twilight Sage: Eclipse," which opens in theatres on June 30.

He and cast members Kellan Lutz and Ashley Greene are in Toronto for the MuchMusic Video Awards.

Samuel jokes that he has been waiting to turn into a raccoon vampire ever since his painful encounter.

"I didn't know that they were kind of nocturnal and aggressive little creatures," Samuel said Sunday during a round of media interviews at a Toronto hotel. "But one of them had this grey, kind of lazy eye, I should have known."

"You should see the photos because it's kind of like a before and during shot.... There's one photo of me happily sitting next to this raccoon and the next photo is this furry ball launching at me. It bit my finger and Bryce was still taking photos and I was like, 'Bryce I think I need medical attention.' "

Otherwise, Samuel says he enjoyed filming in Vancouver and describes his entry into the "Twilight" universe as a "whirlwind."

He says that soon after he auditioned in Sydney he was flown to Vancouver "on a maybe" and then shooting began.

Even before filming started, a cadre of Riley fans made themselves known, he says, noting that his character came with a dedicated following built up by the Stefenie Meyer book series.

"I've had a few people on the street go, 'Riley, Riley!' Which I think is kind of funny. It's a little bit bizarre that attention at first, because I hadn't actually done anything yet but (fans) are waiting outside the hotel," he says.

"But I think that sort of support and enthusiasm is really wonderful. People obviously really enjoy these stories and I think that's a great thing."