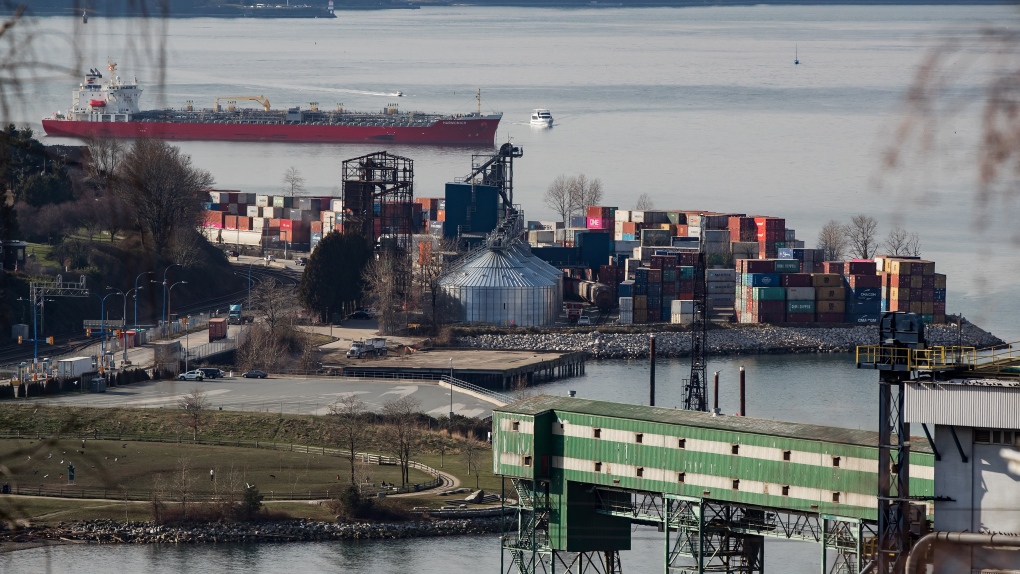 Cargo containers are seen stacked at port in Vancouver, on Friday, February 21, 2020. THE CANADIAN PRESS/Darryl Dyck

VANCOUVER -- The head of Canada's largest port says the novel coronavirus is eating into trade following a year that saw cargo volumes dip.

The number of cancelled sailings is on the rise as broad swathes of the Chinese economy remain effectively shut down due to the outbreak, said Vancouver Fraser Port Authority CEO Robin Silvester.

“We're certainly seeing some impact,” he said in a phone interview. “There's definitely a longer-than-normal slowdown.”

If the virus continues to spread, market quarantines could severely dent trade with Japan and South Korea, which together with China account for well over half of freight volume at Canada's Pacific gateway, Silvester said.

The port saw trade with its largest partner fall 14 per cent in 2019 as China cut wheat and canola shipments from Canada amid diplomatic tensions.

Canadian grain exports to the mainland dropped 37 per cent year over year, with canola exports leading the plunge at 62 per cent.

Mild diplomatic “thawing” between the U.S. and China in recent months could work out well for Canadian bulk exports, Silvester said.

The CEO also commended police for enforcing injunctions and responding “thoughtfully and carefully” to rolling blockades barring access to the port over the past three weeks. Demonstrations in support of Wet'suwet'en hereditary chiefs opposed to a natural gas pipeline slated to bisect their traditional territory in northern British Columbia have disrupted rail service across the country.

“There's no doubt that when we had blockades locally at the port that that introduced friction into the system and we saw spikes in the cargo on the dock waiting to get onto rail,” Silvester said.

Port cargo amounted to 144 million tonnes last year, down two per cent from a 2018 record but still the second-highest in port history - “in one of the most turbulent years of trade that any of us have lived through,” he said.

Fewer oil imports and crude exports by sea dragged down overall petroleum volume by 35 per cent as U.S. refineries turned to domestic sources for crude supply and pipelines for transportation.

However, grain, potash and container shipments reached record highs, despite Chinese trade barriers to Canadian wheat and canola. The three segments rose 3.5 per cent, two per cent and 0.1 per cent, respectively.

“We saw strong trade growth through the port during the first half of 2019 that reached record levels, and a softening in the back half due to various issues affecting global markets,” Silvester said.

The number of automobiles arriving via the port was down by one per cent due largely to lower Canadian sales.

This report by The Canadian Press was first published Feb. 27, 2020.