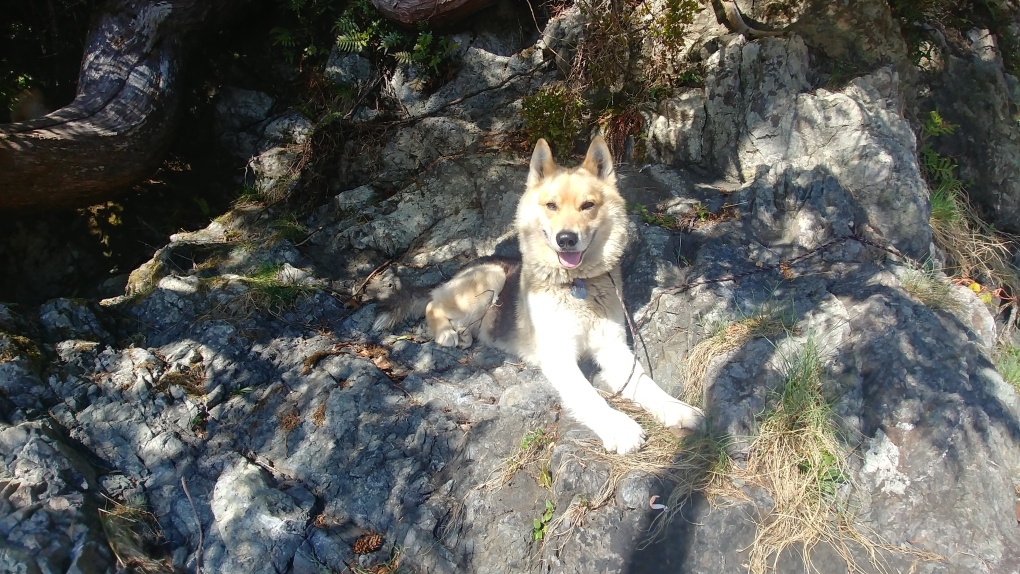 Shannon Boothman was setting up a tent near Tonquin Beach on the night of Nov. 2 when her dog Itska, a tan and black husky mix, "wandered off," something she said he has done before. (Shannon Boothman)

VANCOUVER -- A Tofino woman whose dog has been missing for nearly three weeks is still desperately hoping to get it back.

Shannon Boothman was setting up a tent near Tonquin Beach on the night of Nov. 2 when her dog Itska, a tan and black husky mix, "wandered off," something she said he has done before.

"It was getting dark and I was setting up my tent because I felt like spending a night by myself," Boothman told CTV News Vancouver Island. "So even though I should have had him on a leash, I didn't. I finished setting up my tent and then I was going to go get him because I assumed he went to the beach."

When she got to the beach, she soon ran into an RCMP officer, who told her he had seen her dog with a tourist couple, and that he would bring the dog back to her.

The officer told her to wait for him to return with Itska. She says she did, for about 45 minutes, but the officer didn't return.

At that point, Boothman went to look for him, and for her dog.

She went to a friend's house, where she thought Itska might have turned up. The dog wasn't there.

"So then I just went walking," she said, describing her search for the dog. "I just assumed I would come back and my dog would be there."

When Itska hadn't returned by morning, Boothman called the police. At this point, her version of events and that of police diverges.

She told CTV News she spoke to the officer who had promised to return with her dog. According to Boothman, he said he went back to where she had been waiting and didn't find her, so he returned the dog to the tourist couple and told them they could keep it.

"He made the decision that I was a bad dog owner and gave my dog away," Boothman said. "He said he felt he made the right decision because he came back to look for me and he couldn't find me."

CTV News contacted Tofino RCMP multiple times for comment, but was informed that the person who could speak to media about the case - detachment commander Sgt. Todd Pebernat - was away and would not be returning until Monday, Nov. 25.

A desk officer referred CTV News to comments Pebernat made to the local newspaper, the Tofino-Ucluelet Westerly News.

Pebernat told the paper that the RCMP officer did not take the dog from Boothman or tell the tourist couple they could keep it. He added that he suspected the couple would give the dog to the SPCA out of concern for its welfare, in which case police would not pursue the incident as a theft.

Boothman told CTV News she has been in touch with the Coastal Animal Rescue and Education Network and the SPCA, and posted about Itska on missing animal Facebook groups, but so far her dog has remained missing.

She said she received a tip that Itska had been spotted at a ferry terminal in Nanaimo, but wasn't able to confirm details with the person who provided the tip. She fears that her dog has left Vancouver Island.

Itska is not wearing a collar and does not have a microchip or tattoo to identify him. That said, he is "a very unique-looking dog," according to Boothman. She said she hopes someone will recognize him and return him to her.