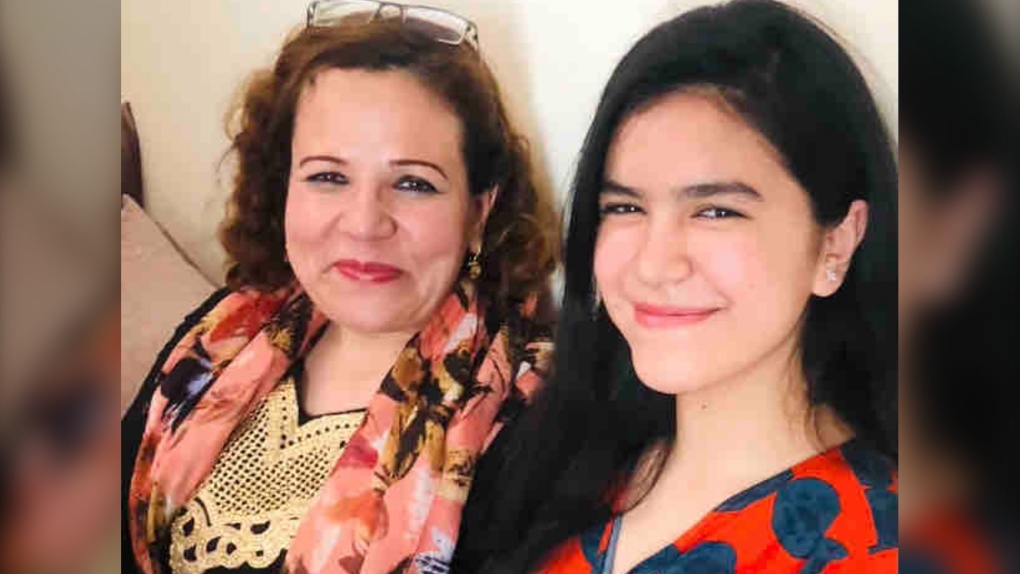 Maryam, right, and her mother are seen in this photo from her GoFundMe campaign.

The last nine months have been extremely stressful for Maryam.

The University of British Columbia student was safely in Vancouver when her hometown of Kabul fell to the Taliban in August. Most of her family was not so fortunate.

Maryam's mother – a women's rights activist and education advocate in Afghanistan before religious extremists retook the country – was still in Kabul.

Her father and two brothers were also living in the Afghan capital, and would likely be targets of the new regime as well.

"It all happened so suddenly, the fall of Kabul," said Maryam, who asked CTV News not to use her last name out of concern for her safety and that of her family.

"It was very scary."

Heather Labrun was also scared by the news reports coming out of Afghanistan as her home country – the U.S. – withdrew from Kabul.

Labrun said she met lots of wonderful students while working for the program, but "Maryam really stood out."

The two kept in touch via Facebook, and when the Taliban returned to power, Labrun messaged to see if Maryam was OK.

"I didn't know if she was back in Afghanistan for the summer," Labrun said. "She wrote back that she was safe, that she was here in Vancouver, but that her family was stuck, and she just said, 'Can you help me?'"

STRANDED AT THE AIRPORT

Labrun's initial thought was that the answer might be no. She didn't have any connections in Afghanistan or the U.S. State Department, and she wasn't sure who she could talk to about getting Maryam's family members on an evacuation flight.

"I would read news articles and I would see who was interviewed and then I would look them up on LinkedIn and reach out to them," Labrun said. "I just began networking like that."

Soon, she said, her efforts grew into "a full-time job." She was able to get in touch with the State Department and secure visas for Maryam's family members, as well as spots on passenger manifests for evacuation planes.

Labrun told CTV News about calling and texting with the family as they made their way to the airport. Unfortunately, they were unable to get through the crowd of people at the checkpoint, despite their visas.

"My family was (at the airport) for a week," Maryam said. "They kept going back and forth, but they couldn't get on any flights."

TALIBAN AT THE DOOR

While Labrun, Maryam and others made more calls to try to secure a way out of Afghanistan for her family, the harsh realities of life under the Taliban set in.

The family's home was subjected to random inspections by agents of the Taliban looking for documents or other evidence of connections to the "infidel" countries of the West.

On one occasion, a group of Taliban going door-to-door in the neighbourhood visited the house and saw Maryam's mother inside.

"He screamed at my mother saying, 'Why is she showing herself?' and, 'She should be invisible because she's a woman,'" Maryam said.

On another occasion, her 17-year-old brother was stopped by the Taliban for playing soccer with his friends. When they noticed his tattoo, they beat him with steel cables, Maryam said.

"He usually hides his tattoo with sleeves, but because he was playing soccer, he was going sleeveless," she said. "They noticed that and then they started beating him."

In April, the family was finally able to leave Afghanistan for a neighbouring country, and a Metro Vancouver group has been approved to sponsor them as refugees. CTV News is not naming which country they're in, again due to safety concerns.

The family is currently waiting on final approval from Immigration, Refugees and Citizenship Canada before making their way to Canada.

In the meantime, both Labrun and Maryam have started GoFundMe campaigns to help cover the family's expenses.

Labrun's fundraiser aims to collect $50,000 to cover the family's expenses once it arrives in Canada, as well as some of the cost of living in the interim country. Maryam's fundraiser was set up explicitly for that latter purpose, but was temporarily frozen by GoFundMe for allegedly violating the company's policy against fundraisers benefiting people in Afghanistan.

Maryam and Labrun said they'd attempted to explain that the family is no longer in Afghanistan. The fundraiser remained frozen for days, but was unfrozen again by Monday morning.

While it was frozen, they were asking those interested in helping to donate to Labrun's fundraiser, but they can now contribute directly to the main campaign.

Funds will also help secure a visa for Maryam's sister, who is currently studying in Uzbekistan and would likely face significant danger if she returned to Afghanistan after finishing school.