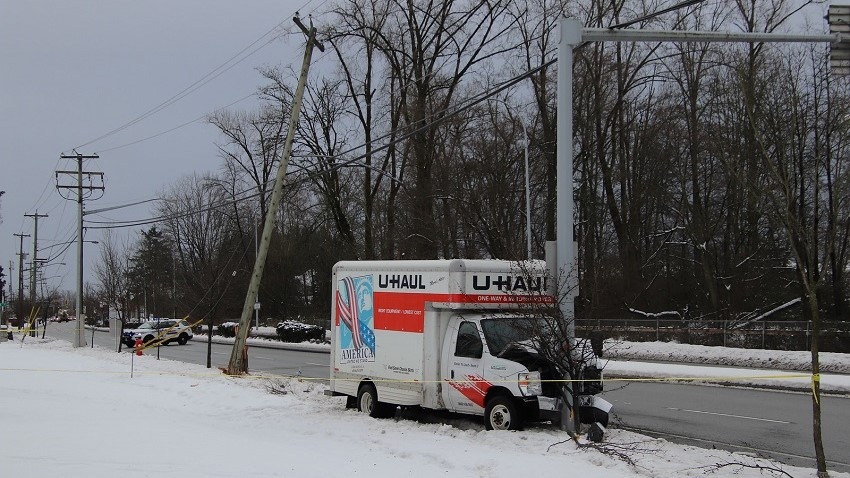 Mounties in Surrey are investigating after a U-Haul truck crashed into a utility pole in their city Saturday morning. (CTV)

VANCOUVER -- Mounties in Surrey are investigating after a U-Haul truck crashed into a utility pole in their city Saturday morning, knocking out power to more than 2,000 BC Hydro customers and disrupting traffic on a major road.

Police were called to the scene near the intersection of Fraser Highway and 184 Street around 10:20 a.m. for reports of the crash, according to Surrey RCMP Staff Sgt. Duane Honeyman.

Honeyman said the caller reported the driver walking away from the scene of the crash, carrying duffel bags. When officers arrived, they were able to locate the man nearby, with the help of witnesses at the scene.

The man was taken into custody, but Honeyman said it was too soon to say Saturday afternoon whether police would be recommending charges against him.

Police are unsure whether the driver was the legal operator of the vehicle, Honeyman said, adding that the RCMP has reached out to U-Haul to try to determine whether it was rented in the man's name or stolen.

Officers are also working to determine whether the contents of the vehicle and the duffel bags belong to the driver, Honeyman said. The truck was not full at the time of the crash, but there were several items inside, he said.

The crash closed the westbound lanes of Fraser Highway between 184 and 185 streets while police investigated.

BC Hydro crews responded to the scene to restore power. The company tweeted that more than 2,000 customers were affected by the incident. Its online outage map indicated that crews expected to have power restored by 4 p.m.