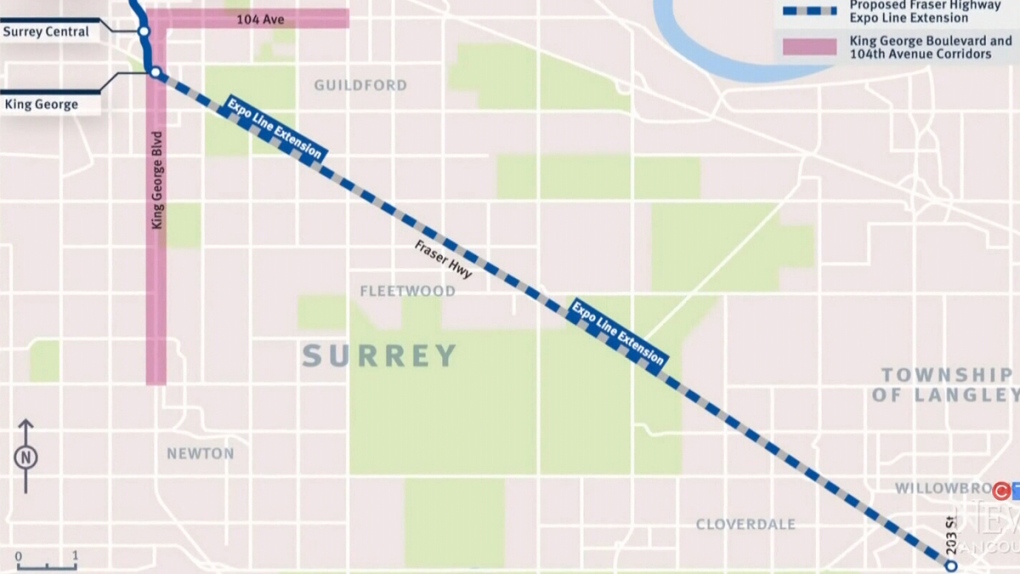 The proposed route for the 16-kilometre Surrey-Langley Skytrain. Source: TransLink

An overwhelming number of people in Metro Vancouver support the proposed Surrey-Langley SkyTrain, according to a new survey.

The results from the first stage of TransLink's public engagement on the project were revealed Thursday.

“This engagement received the second greatest number of responses in the history of TransLink engagements, second only to a topic that affected the entire region,” said TransLink CEO Kevin Desmond.

Commuters living in the City of Langley and Township of Langley showed the strongest approval with 90 per cent and 92 per cent support respectively.

In Surrey, 82 per cent of residents liked the idea while the rest of Metro Vancouver had 84 per cent support.

“Ridership is booming, especially south of the Fraser, and the incredible number of responses from this engagement demonstrates how important it is that we continue improving and expanding our transit system," Desmond said.

The proposed 16-kilometre extension will start from Surrey's King George Station with the route planned along the Fraser Highway to 203rd Street in the City of Langley.

The proposed line replaces a plan for light rail in Surrey, which was scrapped after Mayor Doug McCallum pushed for a SkyTrain instead.

The TransLink survey also asked people to rank their values for consideration for rapid transit options for 104 Avenue and King George Boulevard.

The feedback from the survey will help form part of the updates to the Mayors' Council in July.