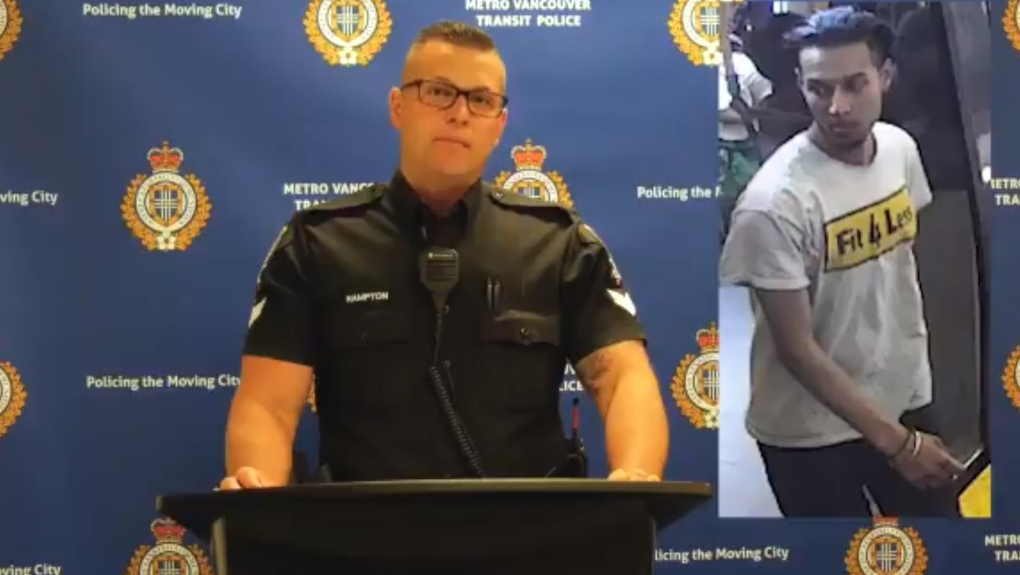 Sgt. Clint Hampton with a photo of the suspect involved in an alleged groping incident. (Metro Vancouver Transit Police/Twitter)

Metro Vancouver Transit Police are asking for the public's help in identifying a suspect believed to be involved in a groping incident on the SkyTrain.

Police say the incident took place on July 25 between 29th Avenue and Edmonds stations at around 11 a.m.

"The suspect boarded the SkyTrain, sat beside the victim, pressing his legs against hers," said Sgt. Clint Hampton, media relations officer for transit police in a video posted to Twitter.

"She shifted over to make room for the suspect. At that point in time, he put his hand on her thigh and left it there for several seconds. He stood up, stepped off the SkyTrain without ever saying a word to the victim."

The suspect is described as being a South Asian, possibly mixed-race male in his early to mid-20s. He's around 5'7" to 5'9", around 160 pounds with black hair and a goatee.

He was wearing a silver bracelet on each wrist and a Fit 4 Less T-shirt.

"This incident is particularly concerning because prior to the incident, the man was seen riding SkyTrain for approximately an hour and a half," Hampton said.

Police believe there could be other victims.

Anyone who knows this person, is a witness to one of these incidents or possibly a victim is asked to get in touch with transit police by calling their tip-line 604-516-7419 or text 877777 with information.

Groping is sexual assault and we investigate every report thoroughly. We need the public's help to identify a suspect allegedly involved in a SkyTrain groping, between 29th - Edmonds Station on July 25th. Please call @TransitPolice tip-line 604-516-7419 or text 877777 with info. pic.twitter.com/9La5kAlAkj