Trans Mountain pipeline shut down after spill in Darfield, B.C. 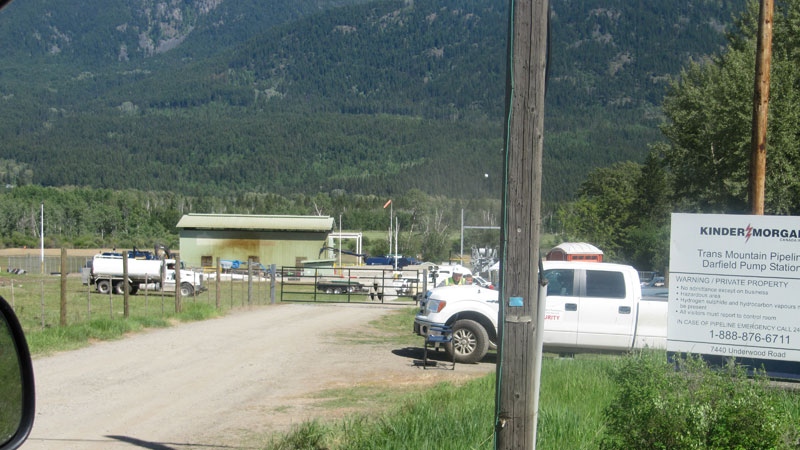 The Darfield pump station is about 80 kilometres north of Kamloops, B.C. (Sharon Halliwell)

Kinder Morgan temporarily shut down its Trans Mountain pipeline as a precaution Sunday after about 100 litres of crude spilled from a pump station in Darfield, B.C.

A spokesperson from B.C.'s Ministry of Environment and Climate Change told CTV News that crews responded immediately with vacuum trucks to suck up the oil after the spill was reported around 5 a.m.

He said a flow meter had leaked and product spilled onto the ground. He added the spill is considered relatively small, and was contained to the pump station property. He does not expect it to impact waterways or the environment.

According to a news release from Trans Mountain Expansion Media Relations, the spilled product was a medium crude blend. The Darfield spill occurred along the same pipeline Kinder Morgan is proposing to expand.

Sharon Halliwell lives in Darfield, a rural community along B.C.'s North Thompson River that's about 80 kilometres north of Kamloops. She told CTV her property is next door to the field where Kinder Morgan's pump station is.

She said a representative came to her door around 10:30 a.m. Sunday morning to inform her there had been a release of oil.

"I asked if a release means, like, a spill and he said yes," she said.

She said the representative told her to expect cleanup in the area for the next 10 days. The company said in its release that neighbours may notice an increase in vehicle activity.

According to Halliwell, Kinder Morgan representatives come by fairly regularly to let nearby residents know about odours when crews release pressure from the lines.

The company restarted the pipeline at approximately 3:30 p.m.