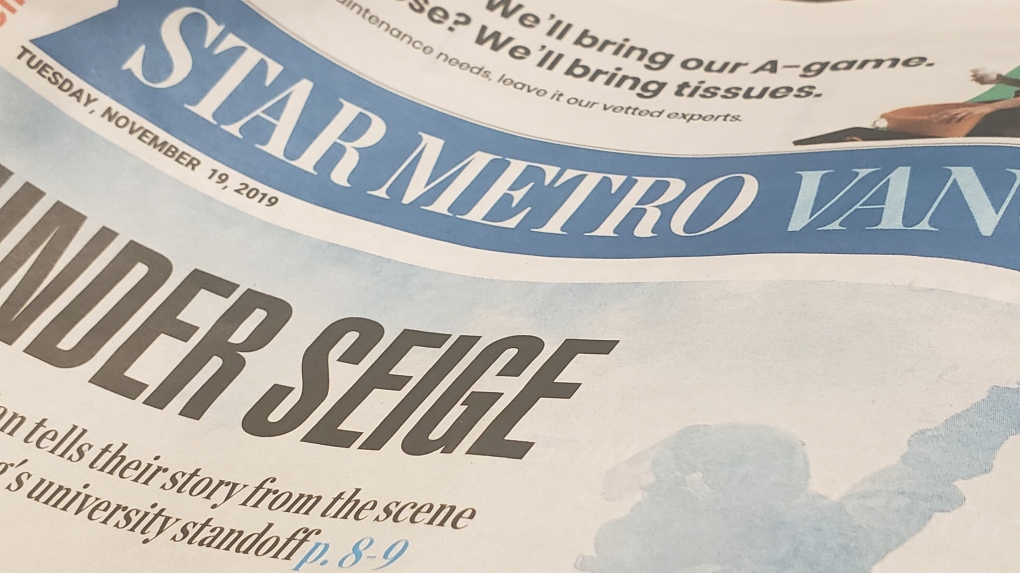 The front page of the Star Metro Vancouver newspaper is seen on Tuesday, Nov. 19, 2019.

Torstar Corp. said Tuesday it will shutter its StarMetro newspapers across the country and cut 73 jobs and will also offer voluntary buyouts to its Toronto Star editorial employees.

The company's StarMetro papers will publish their final editions in Vancouver, Edmonton, Calgary, Toronto and Halifax on Dec. 20.

“This difficult decision was made after an in-depth review of options for the papers,” wrote John Boynton, Torstar president, in a memo sent to staff Tuesday that was obtained by The Canadian Press.

“Print advertising volumes have decreased significantly in recent months to levels below those required to make them commercially viable,” he wrote, adding the papers developed loyal audiences over the years.

The decision will result in 73 layoffs in the editorial, advertising and distribution departments. Eleven of the employees are represented by Unifor. The union did not immediately respond to a request for comment.

Boynton said employees were provided with layoff notices and explanations of their severance entitlements.

Additionally, the company is offering a voluntary departure program to Star editorial employees, said a Torstar spokesperson in an email.

The deadline to apply is in early December. The company did not confirm what target it is looking to reach through the program and whether further layoffs would be required.

“At this stage, we do not know how many employees will apply,” the spokesperson said.

The company also announced in the memo it plans to open new Star bureaus in the coming weeks in four of the cities that will see their free, commuter papers shutter: Vancouver, Edmonton, Calgary and Halifax.

These will be staffed by Star journalists who will provide local coverage and job postings will be posted internally Tuesday and externally Wednesday.

StarMetro journalists will be able to apply for these postings along with others, Boynton said.

“Coming soon, we will be revealing news of a further expansion of our digital presence across Canada,” he wrote in the staff memo.

Torstar holds an investment in The Canadian Press as part of a joint agreement with subsidiaries of the Globe and Mail and Montreal's La Presse.