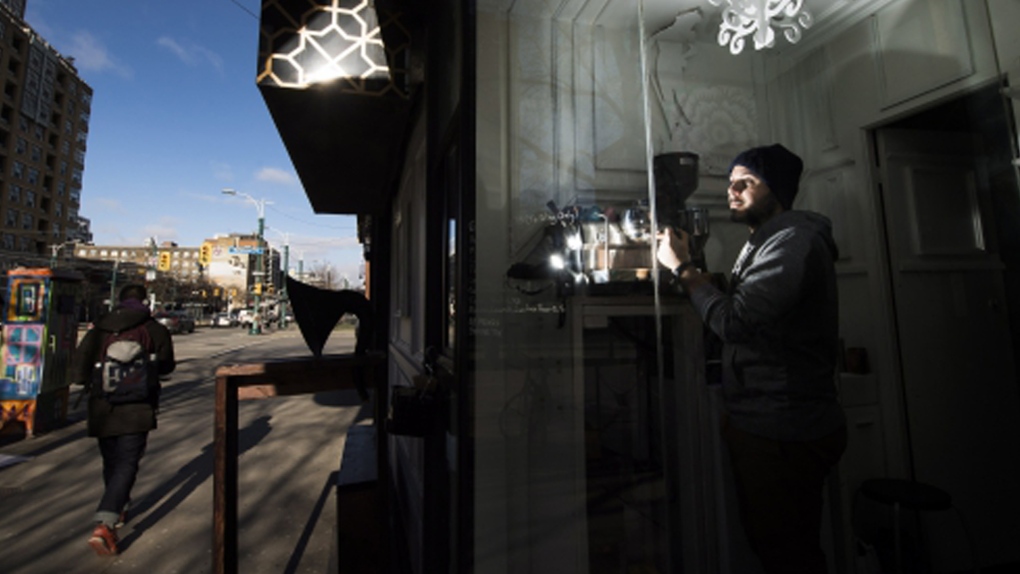 Joshua Campos, owner of The Coffee Lab, poses for a photograph while making a cup of coffee in his 18-square-foot small retail space located on Spadina Ave. in Toronto on Thursday, January 10, 2019. THE CANADIAN PRESS/Nathan Denette

VANCOUVER -- Customers who don't work in the building that houses Kento Kitayama's tiny cafe near Vancouver's Gastown neighbourhood better be prepared to settle for takeout. He can only take orders through a little window facing the sidewalk.

Iktsuarpok Coffee Stand, which opened late last month, has no seating and sparse furnishings. Kitayama could likely stand in the middle of the roughly 17-square-metre shop and reach out to touch the sink, refrigerator and shelving unit, counter, and espresso machine that mark the shop's boundaries without moving.

The cafe reminds the co-owner of how tobacco shops sold goods in his native Japan, but also suits his budgetary constraints. Kitayama and other business owners challenged by high rents in Canada's two most expensive housing markets are turning to creative solutions in tiny spaces to open cafes that otherwise might not be profitable.

For a typical 85-square-metre cafe space in the city, Kitayama said he'd likely pay about $3,000 monthly. That's unaffordable for his new business.

Robust data on average food retail lease prices in Canada doesn't exist, but some figures help shape a sense of the market.

Last October, Toronto's average commercial lease rate per square foot was $21.31, according to the Toronto Real Estate Board -- down 1.1 per cent from the same month in 2017. But that includes all retailers, and the data is part of only 40 total lease transactions that month where the price was disclosed.

Three of the four most expensive main streets in Canada are in Toronto and Vancouver, according to an annual report from Cushman & Wakefield. The company tracks nearly 450 of the top retail streets in 65 countries. In June 2018, rents on Toronto's Bloor Street were $300 per square foot and $100 on Queen Street West. On Vancouver's Robson Street rents averaged $183.

High and rising rents have caused several restaurants in both cities to shutter their doors in recent years.

"We are all familiar with our high cost of living which is reflected in higher rents, increasing food costs and the difficulty in recruiting and retaining staff," proprietor Andrew Wong wrote in a note to customers, adding the restaurant "is no longer viable in our current economic climate."

Lease prices also pose a big barrier to entry for new hopefuls like Kitayama, who have turn to smaller-scale operations in an effort to trim start-up costs.

Iktsuarpok Coffee Stand may be the newest diminutive shop, but it's not the smallest in the country.

Joshua Campos believes his less than two-square-metre shop (roughly the area of a twin mattress) may be the smallest in the world. He's applied for the Guinness world record, but has yet to hear back.

The Coffee Lab, which opened about seven months ago, operates out of a window in a small nook of a Toronto building. Floor-to-ceiling glass lets curious passers-by or customers see one staff member prepare drinks inside.

Campos, who previously operated a cafe out of a bookstore until the landlord sold the building, noticed a "for lease" sign in the window of what is now his new cafe.

The landlord first rejected Campos's idea, saying the lease sign was for an office space in a different part of the building. But Campos persisted and eventually, the landlord caved.

"The idea is just to keep the overhead super low," he said.

It came with a few logistical challenges. He had to find smaller espresso machines to fit the space, while maintaining drink quality. Only one staff member can work at a time, and the cold winter slowed business as customers balked at the idea of waiting outside for their caffeine fix.

Campos has applied for a patio license and plans to build a roughly five to nine square-metre heated enclosure.

Another Toronto coffeeshop, The Nugget, is housed inside a former garage nestled between two buildings.

Co-owner Jake Holton rented the attached building to open another location of his pizza chain, Village Pizza, and asked the landlord if they cared if he converted the garage into another eatery.

For such a small space, though, the monthly fee is low. Holton operates another coffeeshop, Hub Coffee, that's considerably bigger with about 25 seats. The Nugget, aptly named for its size, pays about one-sixth in rent in comparison.

While cheaper rent may be part of the business plan, these spaces can be a hit with customers because of their unique forms.

In the social-media age where Instagrammers hunt for the perfect shot of outrageous food or compelling backdrops, a pint-sized coffeeshop can generate buzz and draw a crowd.

"People seem to love the novelty of just having like a little walk-up counter."