Vancouver's Granville Street Bridge is set to get a significant facelift and six design options have been released by the city.

The city says the eight-lane bridge is underused. The redesign would convert some traffic lanes to cycling and walking lanes on the major artery into the Vancouver's downtown core.

After releasing possible designs, the public is now being asked to weigh in as part of the second phase of engagement in the bridge's upgrades.

So far, nearly $35 million worth of maintenance and repairs on the 65-year-old bridge have been underway for almost a year.

The structural upgrade project began in October of 2018 and, along with a redesign, includes maintenance of the concrete and steel on the bridge as well as replacing some of the expansion joints and bearings.

Option one: West side 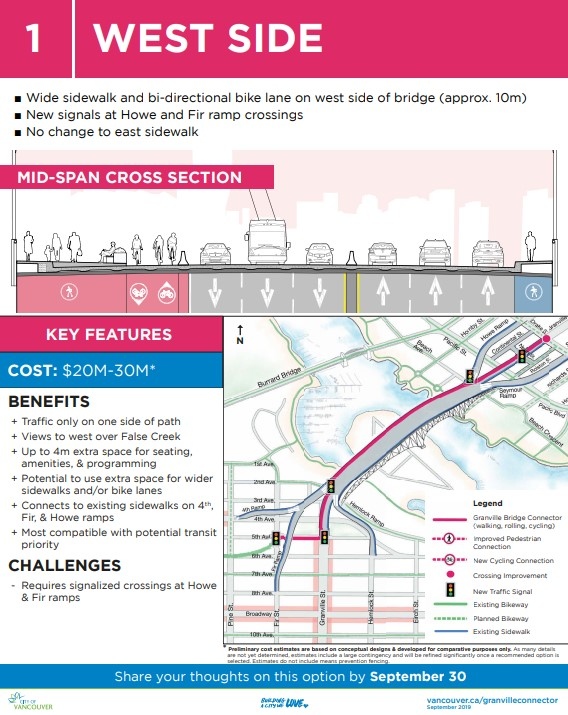 The second option would be similar to the first, with a west sidewalk and bi-directional bike lanes. However, a wide accessible sidewalk would be added to the east side, offering views of False Creek on both sides of the bridge. The cost for this redesign would be $30 million to $40 million. 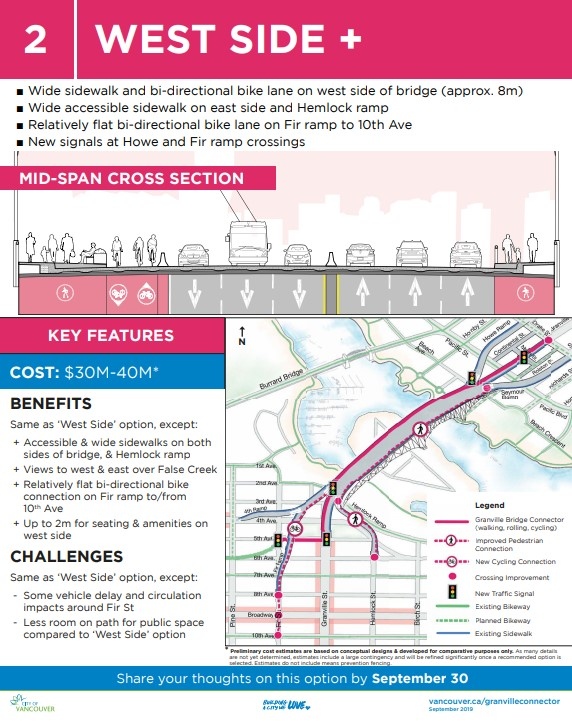 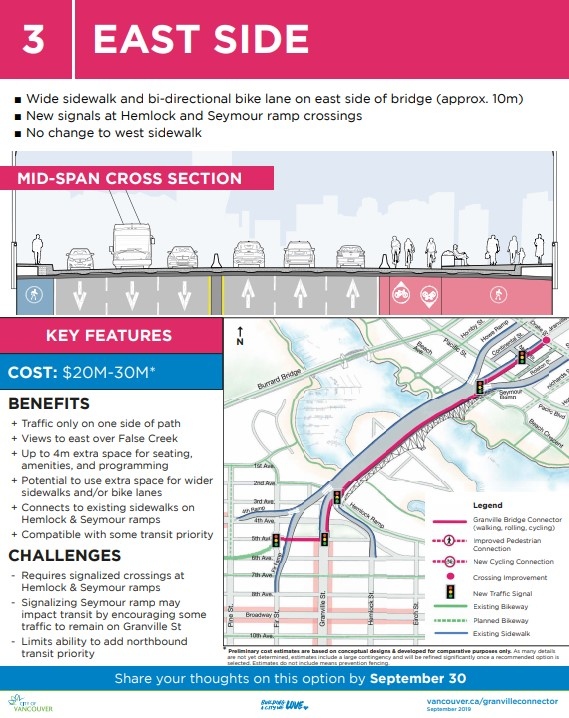 This redesign is similar to option three, in that there would be an east sidewalk and bi-directional bike lanes. However, a wide accessible sidewalk would be added to the west side as well. The cost for this option is $25 million to $35 million. 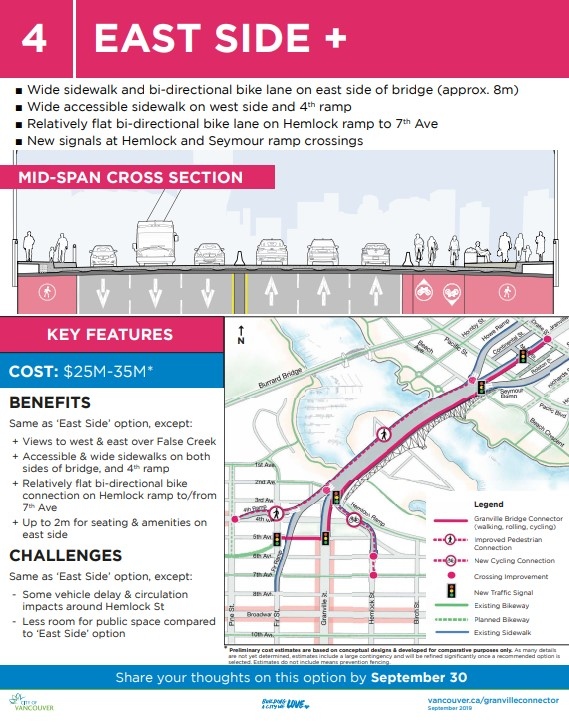 This option would bring a raised sidewalk and bike lane into the centre of the bridge, with traffic flowing on either side. The path would be elevated by approximately one metre, to provide views of False Creek and for separation from traffic.

In this option, there would still be the same sidewalks on the east and west side of the bridge. This option is the most expensive and would cost around $45 million to $55 million. 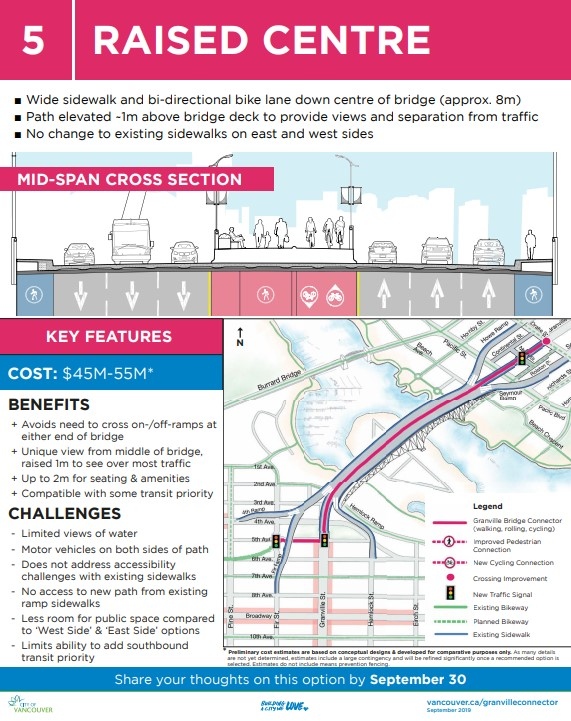 The final option would widen the existing sidewalks on both sides of the bridge slightly and put uni-directional bike lanes on both sides. This option would be similar to the Burrard Street Bridge and would cost around $20 million to $30 million. 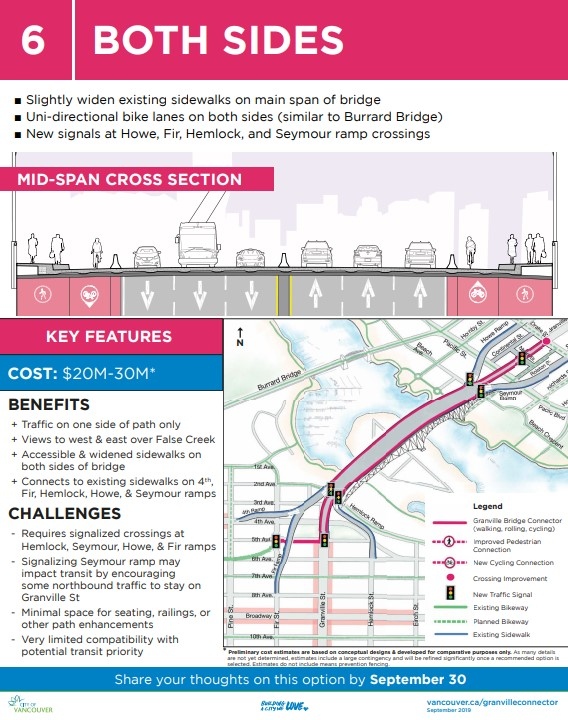 All six options would bring the eight lanes of traffic down to six, but would add bike lanes and wider walking paths. Each option would provide at least three metres for walking. 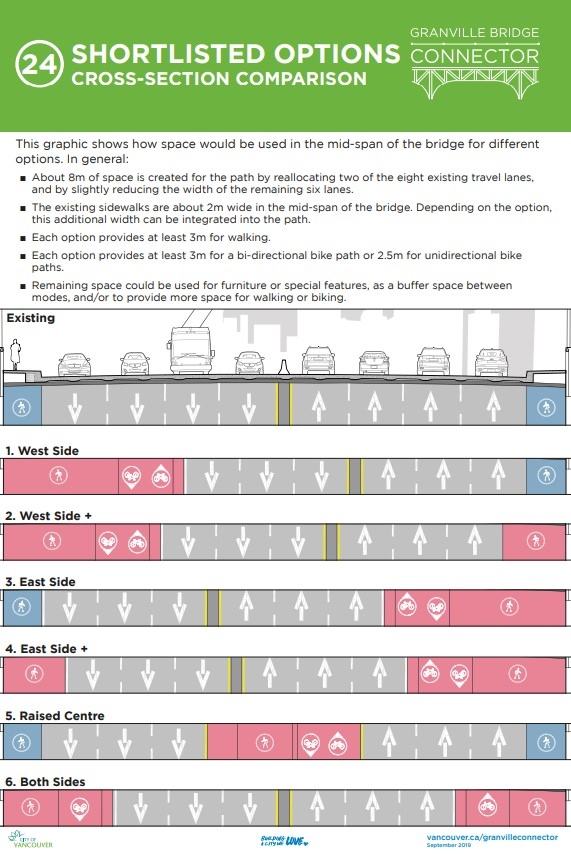 Feedback must be given to the city by the end of the month. Open houses are scheduled for Sept. 13, 14 and 17 and workshops will be held from Sept. 19 to 21. Public input will also be accepted through an online survey set to open on Sept. 13.

All images are from the City of Vancouver's Granville Bridge Connector public engagement display boards.