These are Surrey's 10 worst intersections for car crashes 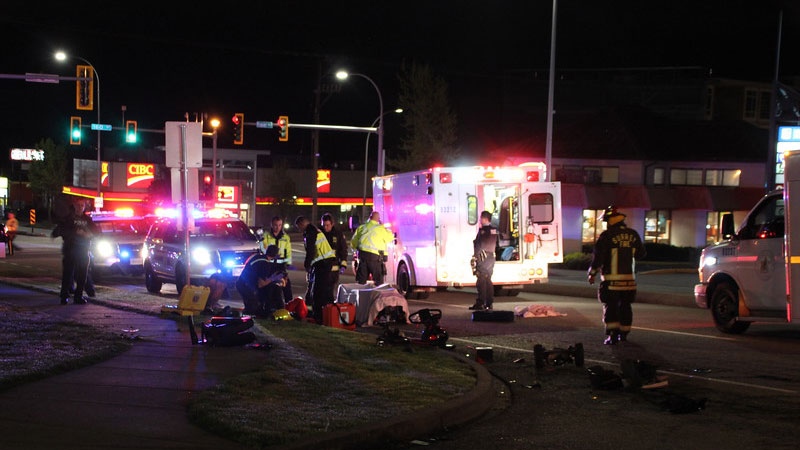 Emergency crews respond to a crash on Fraser Highway in Surrey in this April 2018 file image.

Police are shining a light on Surrey's worst intersections following a month marked by deadly and serious crashes on the city's roads.

Surrey recorded a crash-related death or serious injury every week in May, prompting the RCMP to release a list of the most common collision locations across the city.

At the top of the list is the intersection of 128th Street and 96th Avenue, which has seen 24 crashes over the past three years.

Six of the other top intersections occur along King George Boulevard, accounting for a whopping 95 collisions combined over the same period.

Mounties said they're sounding the alarm in the hopes that motorists will be extra vigilant about following B.C.'s traffic laws.

"Police enforcement alone can not make Surrey’s roadways safer," Sgt. Ian MacLellan of the Surrey RCMP Traffic Services said in a statement. "We urge our roadway users to follow the rules of the road, and to understand that by doing so, they will prevent motor vehicle collision deaths and serious injuries in Surrey."

High-risk behaviour such as speeding, distracted driving and drunk driving accounts for a "large proportion" of deadly and serious crashes, the RCMP said.

Last year, 19 people were killed in motor vehicle crashes across Surrey and another 20 were seriously injured. Police said 290 pedestrians were struck during the same time.

The full list of Surrey's worst intersections for collisions includes: