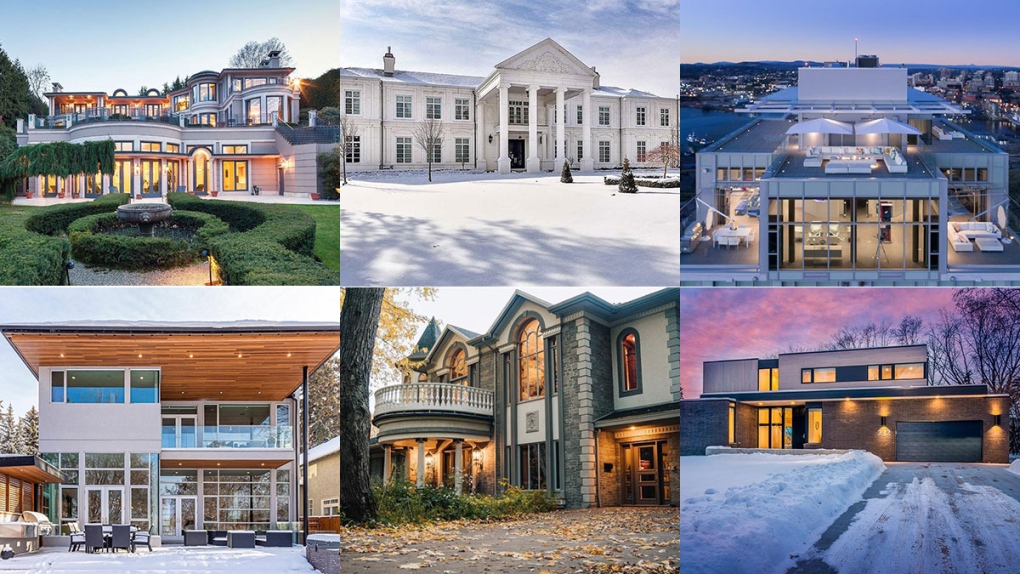 VANCOUVER -- From a $60-million oceanfront estate to a small bungalow on 63 acres of land, the most expensive homes for sale vary across Canada's real estate markets.

Whether you're in the market or just looking for a distraction at work, here's a look at some of the most expensive homes listed for sale online in markets across Canada.

And a warning before you begin: For some of these homes, the property taxes alone are more than the average Canadian earns in a year. 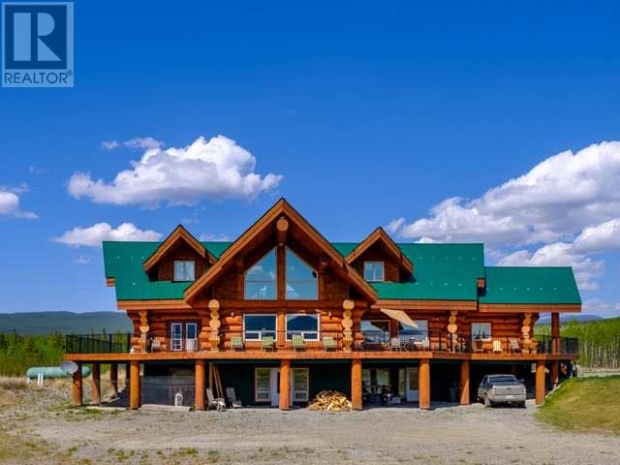 The 170-acre property features mountain views, a private landing strip, a well, and oversized septic field. The listing bills the large home as an opportunity for farming and tourism. 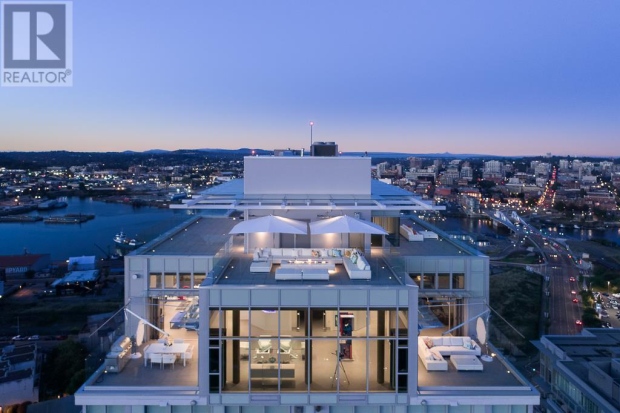 A more expensive estate is also for sale in Victoria, right on the water with sweeping views of the ocean and mainland mountains. It was featured in July. 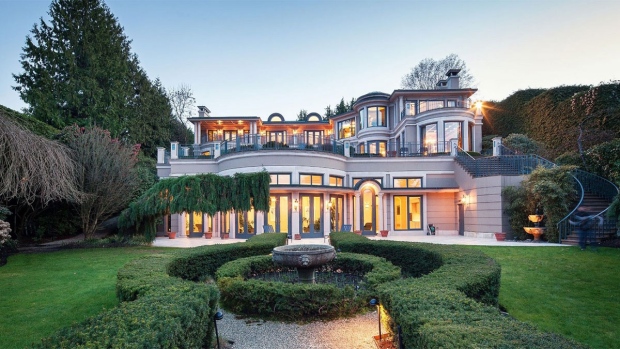 For a hefty price, would-be buyers could find themselves inside Belmont Estate, a five-bedroom home with views of the Pacific Ocean and Vancouver skyline.

The property's 1.28 acres includes a dozen full bathrooms, a stone waterfall, "soaring ceilings" and a grand hall that realtors say has been played in by world-class musicians. (Photo from Southeby's International Realty) 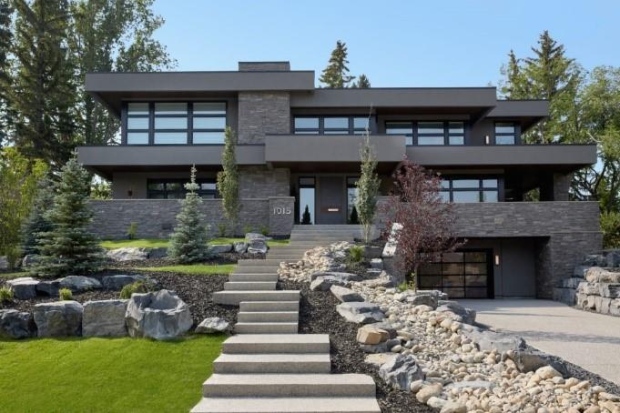 Moving east, one of the most expensive homes in the City of Calgary is a five-bedroom, six-bathroom house on Sydenham Road.

The 5,500-square-foot, Frank-Lloyd-Wright-inspired home was designed to feel like entering an art gallery. The master bedroom includes a closet bigger than many one-bedroom apartments, and the home also includes a "stylish" Federal Renaissance personal elevator.

Both Realtor.ca and Sotheby's list more expensive properties, but many are not within the city itself. One example is a "contemporary country castle" featured last summer, which appears to still be for sale several months later. 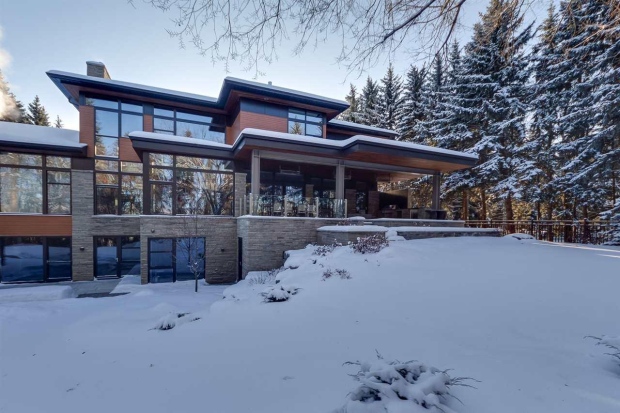 This four-bedroom, seven-bathroom home on Wedgewood Crescent backs onto a ravine.

The two-storey house is about 10,300 square feet, with a five-car garage, gated entrance and mature landscaping.

As with Calgary and other cities, there are pricier pads posted, including a "classic English brick manor" featured in July, which was still listed on Realtor.ca in February. 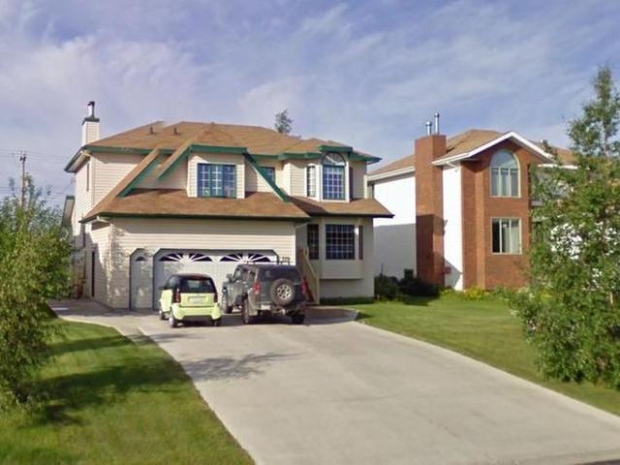 The priciest pad listed on Realtor.ca in the Northwest Territories capital is this three-bedroom, three-bathroom home.

The 2,600-square-foot house is centred on a fenced-in lot with an upper deck and lower patio, with views of Range Lake from the top floors. 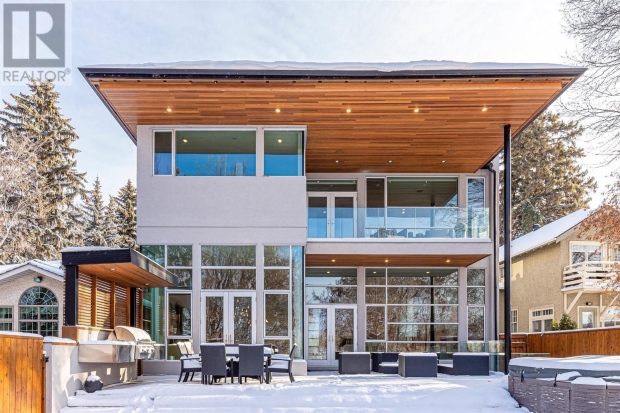 In Saskatoon, this "custom, architecturally designed, strategically engineered" seven-bedroom home is listed at just under $4 million.

The 5,000-square-foot space includes six bathrooms, three family rooms, two dining areas, an office, a craft room and a butler's pantry. It also has a glass-walled gym, and backs on to the bank of the South Saskatchewan River.

The backyard includes a three-tier deck, pool, hot tub and shed, and the driveway and garage are heated. 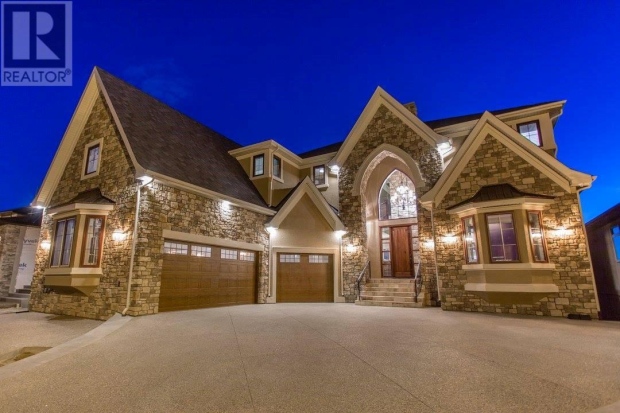 A seven-bedroom, five-bathroom two-storey home is the most expensive listing on Realtor.ca in Saskatchewan's capital.

The walk-in closets and curved staircase are custom, and the listing claims, "This truly is a mini castle perfect for a big family!" 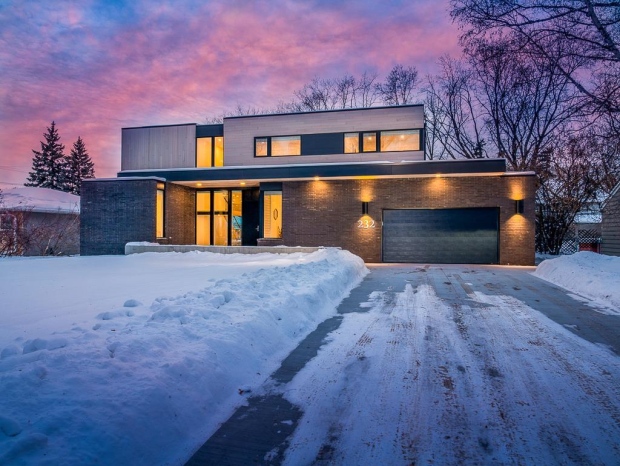 This new home features five bedrooms, five bathrooms and an open concept layout "that encourages entertainment and leisure," according to the listing.

At 975 square feet, the garage is bigger than many apartments, and includes in-floor heating, as does the rest of the house. 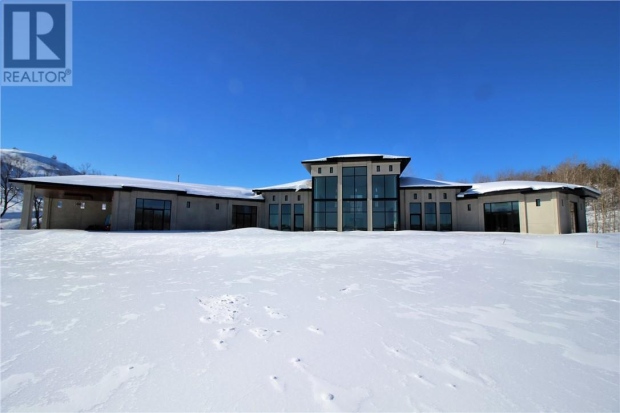 Located on Ramsey Lake, this property includes 800 feet of waterfront and a 200-foot sand beach.

The six-bedroom, five-bathroom home sits on almost three acres of land, and includes a grand entrance with 24-foot ceilings.

Floor-to-ceiling windows provide views of the lake, and the home also features a gourmet kitchen, master wing, theatre room with stadium seating and an 1,800-square-foot garage. 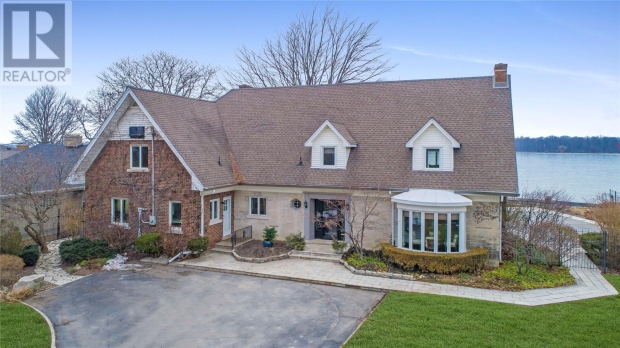 As of Feb. 19, this is the most expensive home listed within the City of Windsor, though there are more expensive properties posted in the surrounding area.

This 4,100-square-foot riverside house features three bedrooms and four bathrooms, as well as a recently renovated kitchen with two ovens.

The living and family rooms include wood-burning fireplaces, and the house has a walk-in wine cellar and two-storey solarium. It also has a heated pool, detached garage, and two-bedroom coach house. 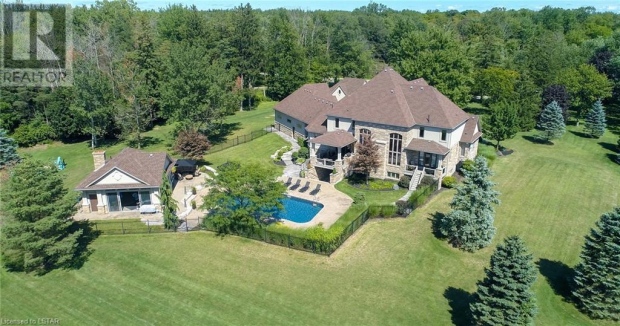 Looking only at properties within the city, the most expensive listing in London is this five-bedroom, six-bathroom house on four acres of property.

The house itself is approximately 5,500 square feet, and there's a cabana the size of a one-bedroom apartment and two garages on the grounds.

The listing boasts of coffered ceilings, extensive millwork and built-ins, as well as a wet bar and lounge, pool, patio and deck with a fireplace. 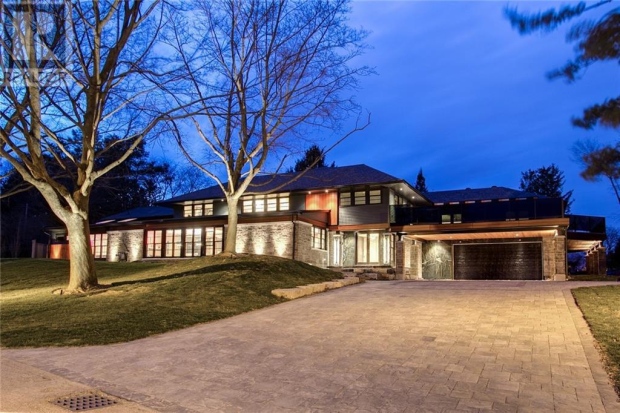 Described by listing agents as an "architectural masterpiece," this 10,000-square-foot home is the most expensive listing in Kitchener. 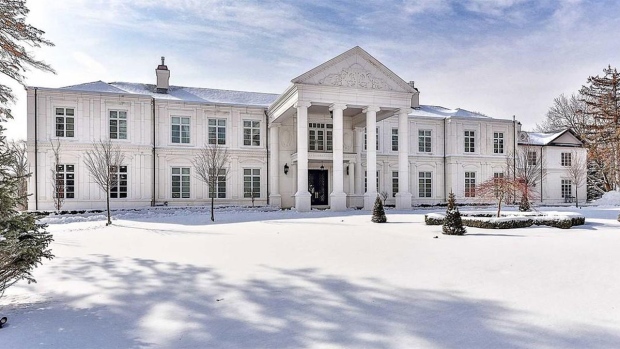 Excluding the rest of the Greater Toronto Area, this mansion on the tony Bridle Path is Toronto's highest-priced listing.

The listing says it includes a whopping 25 parking spaces. Last year, the property taxes for the home nearly reached $125,000. 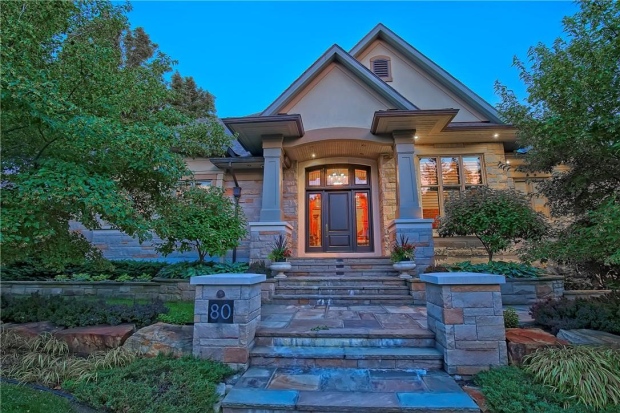 The most expensive listing on Realtor.ca in Canada's capital is this four-bedroom, four-bathroom home in the Rockcliffe Park area.

The house has heated floors and driveway, an oversized triple garage and a "resort-like main floor master suite," the listing says. 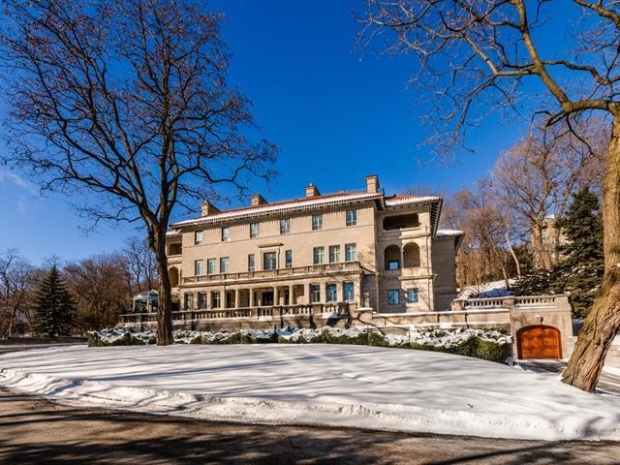 This is one of Montreal's most expensive homes for sale in February.

Featuring 10 bedrooms and eight bathrooms, the home sits on nearly two acres of land. The listing agents describe it as a "real life Downton Abbey," and say it was built by J.W. McConnell – an architect who built for the Rockefellers – in 1924.

Photos in the listing show fireplaces, wood paneling, ornate bathrooms and a bar. 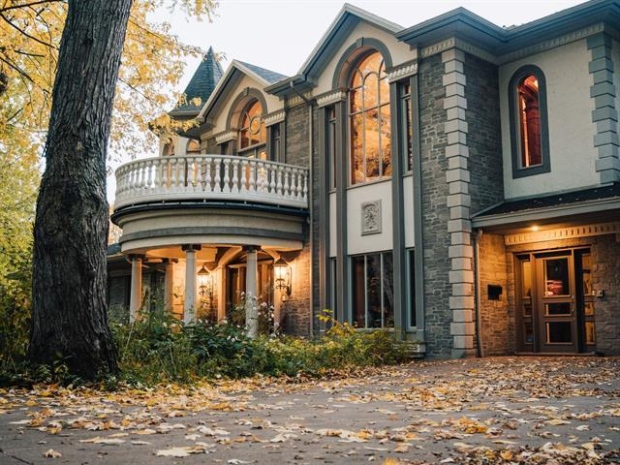 "Un site de rêve!" the listing boasts of this four-bedroom home on 50,000+ square feet of land.

The house includes three bedrooms, a triple garage, lots of lounge-type space and an indoor pool, as well as a recently renovated kitchen. 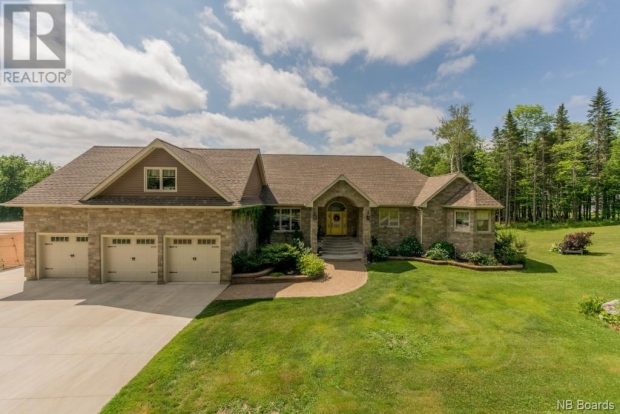 The New Brunswick capital's highest-priced listing located within the city is a six-bedroom, four-bathroom house on nearly six acres of land.

Described as the "ideal setting for elaborate entertaining," the house includes a butler's pantry, a master suite, craft room, great room and loft with a second, separate family room. 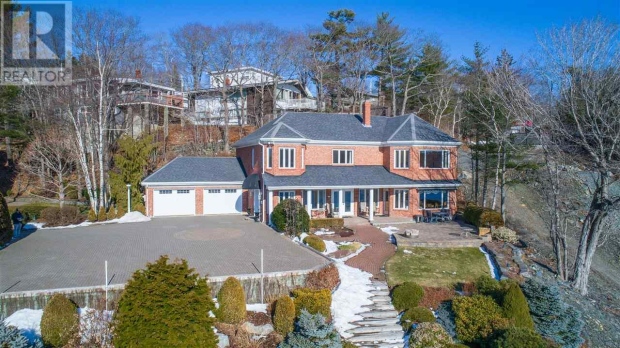 Billed as one of the most coveted addresses in the Nova Scotian city, this four-bedroom, four-bathroom home is the most expensive listing on Realtor.ca within Halifax.

The listing boasts about the view of historic Dingle Tower, as well as the home's pantry with wet bar, wood-burning fireplace, rec room and gym and cold room that could be turned into a wine cellar. 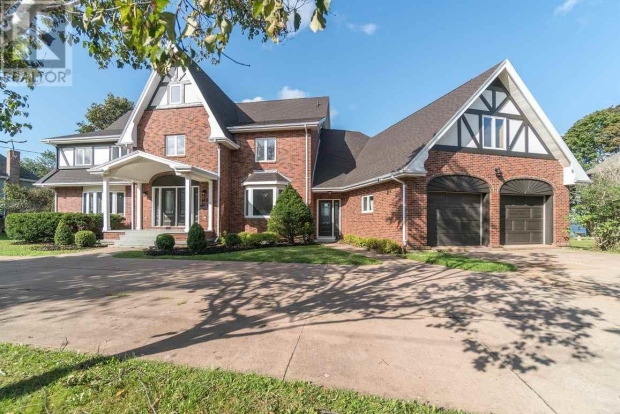 This waterfront home in P.E.I. is the capital city's most expensive listing.

It has six bedrooms and five bathrooms, and two levels of the home have recently been renovated.

Photos show a large back deck backing on to the North River. 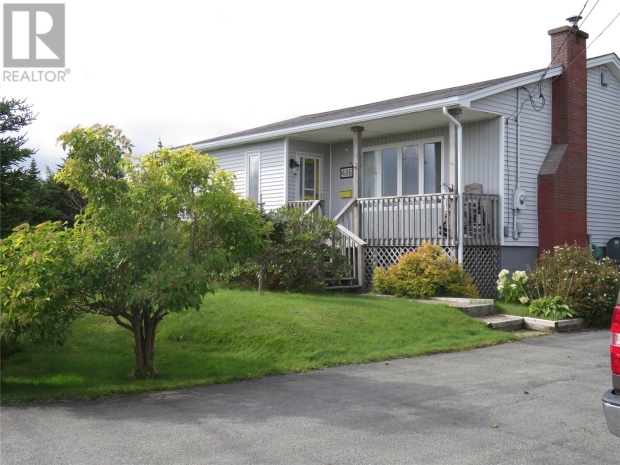 This higher-priced listing includes 63 acres and is next to a golf course, with views of the St. John's harbour and Signal Hill.

The home on the property is a three-bedroom, two-bathroom bungalow, and the listing suggests, "Value is in the land for sure."

All photos are from Realtor.ca unless otherwise stated.