These are some of the B.C. victims of the Iran plane crash 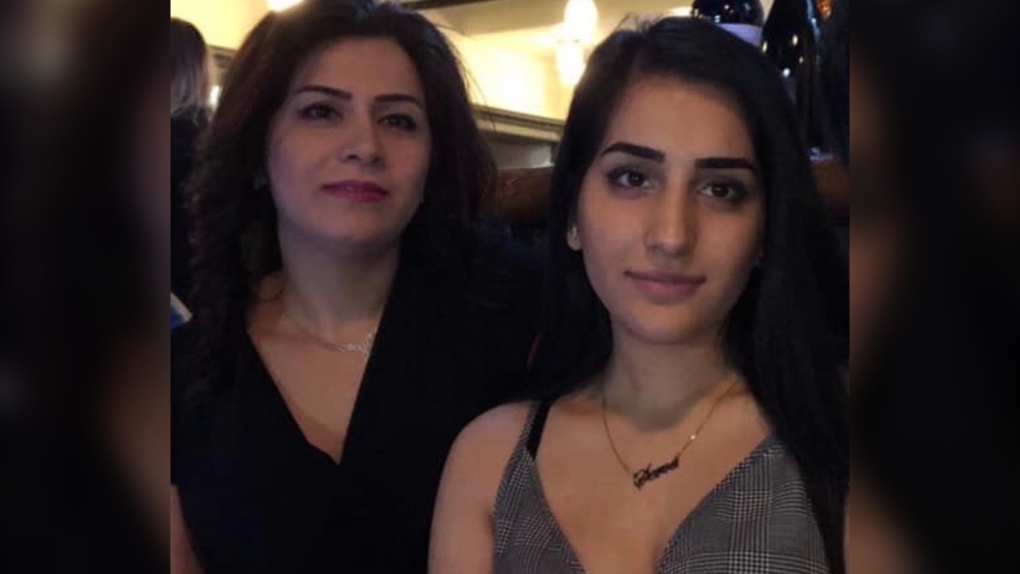 Ayeshe Pourghaderi and Fatemeh Pasavand, a mother and daughter who helped run Amir Bakery in North Vancouver, died in the disaster.

VANCOUVER -- Dozens of people with ties to Canada were among the 176 who were killed when Ukraine International Airlines Flight PS752 crashed after takeoff near Tehran, Iran.

Prime Minister Justin Trudeau has said that intelligence from multiple sources indicates that an Iranian missile downed the flight, though it might have been unintentional.

Here is a look at some of the victims with ties to British Columbia:

Mehran Abtahi and Mehrdad Taheran were from the same city in Iran.

Taheran found out through a mutual friend that Abtahi was on the doomed Ukranian flight.

“We wished to meet each other this year, but it will never happen,” Taheran said.

Abtahi, 37, had gone to Iran to meet his wife over Christmas.

The two men had finished their PhDs in June 2018 and were looking for jobs, Taheran said.

“Several months ago he told me that he found a decent job in Vancouver and moved to start a new chapter in his life,” he said. “Unfortunately it was the shortest, saddest and last chapter.”

In a statement, the University of British Columbia said Abtahi had joined the institution last year as a post-doctoral research fellow in the department of civil engineering.

The president of the Vancouver-based Civic Association of Iranian-Canadians, Kei Esmaeilpour, said a family of three from Coquitlam, B.C., was killed in the crash.

Esmaeilpour said Ardalan Ebnoddin Hamidi, an engineer, and Niloofar Razzaghi, who had just completed university training to become a teacher, lived in the Metro Vancouver city with their 15-year-old son Hamyar Ebnoddin Hamidi.

Esmaeilpour said the family was vacationing in Iran.

He said he worked with Ebnoddin Hamidi and the two had served on the civic association together for at least a decade.

Jessi Eiriksson, 15, said through tears that Kamyar Ebnoddin Hamidi was one of her best friends. Both were in Grade 10 at Riverside Secondary School in Port Coquitlam, B.C.

“He was the most caring person I have ever met. He was always there for me and he would be there for anybody whenever they needed someone to talk to,” she sobbed.

“It's the hardest thing losing him.”

He loved making music and wanted to become a producer when he was older, she said.

She said he also enjoyed playing soccer for fun and they would often kick a ball around together.

“He was shy except he's just such a loving person that everyone loves Kamyar. He makes everyone happy just with his smile and a joke.”

The University of British Columbia said Razzaghi graduated with a bachelor of science in math in 2010 and a bachelor of education in 2018.

A North Vancouver couple in their mid-50s, Firouzeh Madani and Naser Pourshaban were both award-winning physicians in Iran, said their niece Sara Hezarkhani. They were working towards getting their licences to practise in Canada.

“No words can describe their personalities, their true spirit, the passion that they had for the work,” said Hezarkhani.

The couple was in Iran for about two weeks over the holidays to visit family, she said.

Pourshaban and Madani had been living in Canada for about seven years, said Hezarkhani. Their daughter is a university student in the Lower Mainland. She was not on board the flight.

“This is a big loss for our family and it will be very hard to (get) over,” said Hezarkhani.

Dadashnejad was originally booked for a round trip on Lufthansa Airlines, departing Vancouver on Dec. 17 and returning on Jan. 7, but her passport was stuck in Ottawa as part of her student visa renewal application, he said.

She got her passport back the morning of Dec. 18 and rebooked with Ukrainian International Airlines for a trip leaving that day and returning Jan. 8, said Ahmadi, who added he was supposed to pick her up from the airport.

“She was a very loving and compassionate person with a very kind heart, very loyal to her friends, and always tried to help people. Always.”

Dadashnejad planned to become a dietitian because she was passionate about health, said her friend, who added the young woman was an avid yogi and loved spending time outdoors in Vancouver.

He said she's survived by her sister, who lives in Burnaby, B.C., and her mother and father who live in Tehran.

“We are heartbroken over the fatal tragedy that took place; our thoughts and prayers are with those in mourning.”

Nasim Hadadi said she first met Roja Omidbakhsh, 23, last September. The young women, along with another friend, shared student residences at the University of Victoria.

Omidbakhsh went to Iran to be with her family during Christmas, Hadadi said.

Hadadi said her roommate was booked on the Ukrainian Airlines flight from Tehran and was supposed to return to Victoria on Wednesday.

“She always tried to help us, and comforted her friends when they were going through hard times.”

The University of Victoria said Omidbakhsh was registered in the Gustavson School of Business and was in Prof. Mark Colgate's commerce class for her first term.

“Roja was very positive and had a keen interest in marketing. She was on the pathway to complete a bachelor of commerce,” Colgate said in a statement released by the school.

“We're heartbroken that this happened and our condolences go to her family and classmates.”

Friends of a man who runs a bakery in North Vancouver say the crash left his small family shattered.

“The family supplied bread to my store,” said Reza Varasteh, owner of Vanak Market and Deli, which is across the street from Amir Bakery.

The mother and daughter went to Iran about a month ago on vacation, he said, adding that he has known the family for about five years.

He described the family as hardworking and Pourghaderi as pleasant.

“She was always laughing, really kind.”

Varasteh said Amir Pasavand left for Tehran on Wednesday to be with his family.

Fatemah Pasavand was a student at Carson Graham Secondary School in North Vancouver and was going to turn 18 this month, he said.

“The dad was wishing he was in the airplane instead of them,” he said. “He had a hard time realizing he lost his family ... He had prepared a special meal that his daughter had asked for when she came back.”

“This has been a very trying day for the Denna Homes family. As a small office of 10 people, Daniel's passing is a significant loss to all of us. Daniel was a colleague, a friend and family. Both he and Faye will be sadly missed,” Dan Thomson, vice-president of marketing, said in a statement.

“Daniel and Faye both had a zest for life that lit up every room they entered.”

Farzad Taheri said he saw his cousins, who went by the English names Daniel and Faye, just before Christmas.

“We were the only family they had in Canada,” Taheri said.

His death is a “big loss to humanity,” he said.

“Faye was the most positive, also extremely kind and generous woman.”

The siblings were returning to Toronto after spending Christmas with their family in Iran, said Shani, who had known them for about six years.

“They frequently travel solo. It just so happens that this time the two of them were on the same flight,” he said.

The brother and sister were students at the University of Toronto, and had moved from Vancouver about 1 1/2 years ago.

Shani said he found out about their deaths through a flood of text messages and posts.

He described Mohammad as a “role model, an inspiration” and “a friend in a time of need.”

“In his 23 years Mohammad achieved more than most people do in their lives,” Shani said. “I really believe that.”

This report by The Canadian Press was first reported Jan. 10, 2020