VANCOUVER -- Canadian taxpayers have been stuck with the bill for Prime Minister Justin Trudeau's travel by military aircraft, even when that travel combines official government business with Liberal party events, a CTV News Investigation reveals.

The investigation, in connection with Bob Mackin of theBreaker.news, examined the prime minister's seven trips to British Columbia between May and August of 2019, and focused on a two-day trip in late May, and another in late August.

In both cases, while the trips combined official government announcements and either Liberal party fundraisers or the production of a Liberal party campaign video aired during the election period, the Liberal Party of Canada did not reimburse the equivalent cost of the prime minister's air travel, or a portion of it.

There is no indication the mixing and matching of official government and party business on the same trip violates any government guidelines, or election or campaign finance laws. And both trips took place before the official campaign period had begun.

But Aaron Wudrick, federal director of the Canadian Taxpayers Federation, questions whether political parties should be paying back at least part of the prime minister's transportation bill.

"I think if you've done three events, and one of them is a partisan event, splitting the bill three ways is a fair way to do it," Wudrick said.

On Aug. 29, the prime minister and seven members of his staff flew from Ottawa to Vancouver onboard a government-owned Challenger jet, records obtained from the Department of National Defence through a Freedom of Information request show. 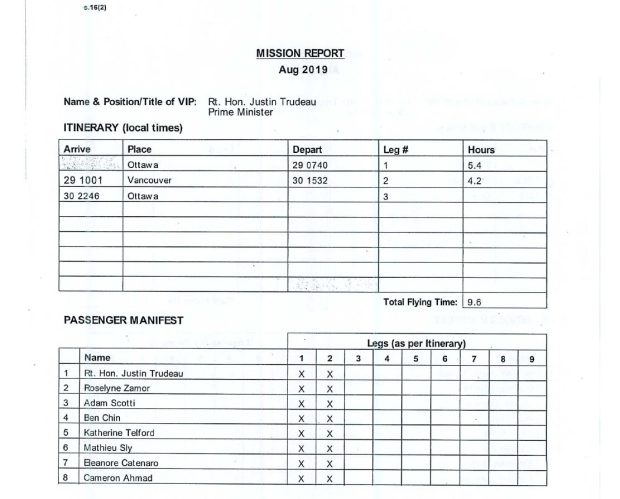 This report shows the Prime Minister's itinerary and passenger manifest for an Aug. 29-30, 2019, trip to B.C. aboard a government jet. Source: Department of National Defence

Less than two hours after touching down, the prime minister appeared alongside Premier John Horgan at a BC Hydro facility in Surrey to announce a memorandum of understanding "to affirm their joint commitment to power British Columbia's natural gas production and (LNG) sectors with clean energy."

The following morning, Aug. 30, Trudeau met with Vancouver Mayor Kennedy Stewart to discuss the housing crisis and opioid emergency, among other topics.

Both events were on the prime minister's official schedule.

And before departing for Ottawa that afternoon, Trudeau wedged in a video production shoot on the Grouse Grind – a gruelling hike that is well-known in Metro Vancouver – for a Liberal party campaign video that featured the prime minister, and would air beginning in late September.

Then-Minister of Fisheries, Oceans, and the Canadian Coast Guard Jonathan Wilkinson, and Defence Minister Harjit Sajjan, can be spotted in the final edited video.

Liberal MP candidates Terry Lake and Tamara Taggart were also among those who took part.

Records obtained from the Department of National Defence show the total cost for the prime minister's return flights from Ottawa for the two-day trip, when calculated using a per-hour average for his total travel on government Challenger jets for the month August, at $54,115.08. 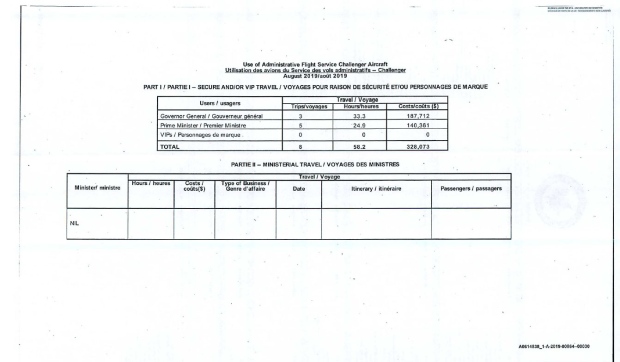 This report shows the prime minister's total travel by government Challenger aircraft in August 2019, along with the total cost. Source: Department of National Defence

Two months earlier, on May 21, 2019, records show the prime minister and eight of his staff flew to Kamloops, for the first leg of a trip that would later take them to Vancouver and on to Saskatchewan.

That afternoon, Trudeau met with government leaders and wildfire emergency response personnel at Kamloops City Hall, an event that was described as "private meetings" on his official schedule.

That evening, he appeared alongside Terry Lake at a campaign-style rally, to announce Lake as the Liberal candidate for the Kamloops-Thompson-Cariboo, at one point taking the stage with Lake and hoisting his hand in the air in front of a glowing crowd.

Later than evening, National Defence records show the prime minister and eight staffers flew to Vancouver. The government plane returned to Kamloops shortly after, with no one listed on the official manifest.

Its third leg that evening took it back to Vancouver, with eight passengers on board, including MPs Jonathan Wilkinson and Carla Qualtrough, and Amanda Campbell a Regional Adviser in the Prime Minister’s Office.

The next morning, in Vancouver's Stanley Park, Trudeau announced the renewal of the Canadian Coast Guard fleet.

Later that morning, the PM attended a Liberal party fundraiser at the Opus Hotel in Yaletown, while Trans Mountain pipeline expansion opponents rallied outside.

That evening, he attended a second party fundraiser at the Neptune Palace restaurant on Marine Drive.

Fundraising event reports filed by the Liberal party with Elections Canada indicate a total of 145 attendees between the two fundraisers, with each person paying between $250 and $1,500.

• Here's the report for the Neptune Place fundraiser

Records from National Defence show the prime minister then flew to Sakatchewan the following morning.

And those same records also show the total cost for the Ottawa-Kamloops, Kamloops-Vancouver, Vancouver-Kamloops, and Kamloops-Vancouver flight segments, calculated using a per-hour average for the prime minister's total travel by military jet in May, at $40,022.77.

The number doesn't sit well with the Aaron Wudrick at the Canadian Taxpayers Federation.

"A fundraiser for the Liberal party is not government business and Canadian taxpayers should not have to subsidize it," Wudrick said.

Party policy: Reimburse only if travel "exclusively" campaign- or party-focused

When CTV News reached out to the Liberal Party of Canada to ask about both trips, Braeden Caley, the party's senior director of communications, explained that the party reimburses the government the "equivalent economy airfare" only in cases where the prime minister travels solely for party activities.

"In other cases where Mr. Trudeau has travelled exclusively for campaign events or other party activities, the (party) reimburses the (government) for the replacement value of the prime minister's travel…as per the usual procedures," Caley wrote via email.

It is a widely understood practice that elected officials like the prime minister, who must travel using government aircraft for security reasons, use the lowest economy airfare equivalent to offset their air travel when not traveling on official government business, for example when they or family members travel for vacation.

When pressed if the Liberal party reimbursed or planned to reimburse any portion of the prime minister's travel for the May or August 2019 trips to B.C., Caley wrote: "No, as the events you've mentioned were added to other government travel plans."

Wudrick takes issue with that.

"I do not think a trigger point should be only 'exclusively partisan,'" Wudrick said.

"Because what you could have then is one government announcement, and seven partisan events, and it would not qualify then for reimbursement," he said.

The Canadian Taxpayers Federation also questioned, broadly speaking, whether this encourages elected leaders and their staffers to build official government photo-ops and announcements around partisan events, "rather than the other way around."

There is no suggestion that any aspect of the prime minister's two trips to B.C. violates election or campaign finance laws or parliamentary guidelines.

Even if the Liberal party decided to reimburse the federal government for the prime minister's August 2019 trip, which included the production of the Grouse Grind campaign video, taxpayers would still be on the hook for five figures.

The widely accepted practice is to use the lowest economy airfare for the travel dates. CTV News used the same dates for August of 2020, and calculated a return airfare from Ottawa to Vancouver of $556.

That means taxpayers would still be on the hook for $53,559.

And if the Liberal party also submitted reimbursements for the seven additional staffers on board, as it says it does in cases where staff travel on flights with Mr. Trudeau solely for campaign events or other party activity, that would still leave taxpayers with a bill just under $50,000.

Wudrick is hopeful that focus on government spending may trigger a bigger conversation about ministerial-level travel, especially in a time when Ottawa is especially sensitive to carbon emissions.

"Do we really need to be jetting across the country, essentially for photo ops?" he questioned.

And when asked whether he thinks the Liberal party should cough up at least the equivalent economy airfare for the prime minister's two trips, what Wudrick calls "the bare minimum," he answered:

"We think the public is the best judge of whether or not something passes the smell test."